No GoFundMe for Kim Davis: Crowdfunding puts the brakes on the disturbing bigots-get-rich-quick trend

If the plan was to fundraise, more platforms aren't going to play along 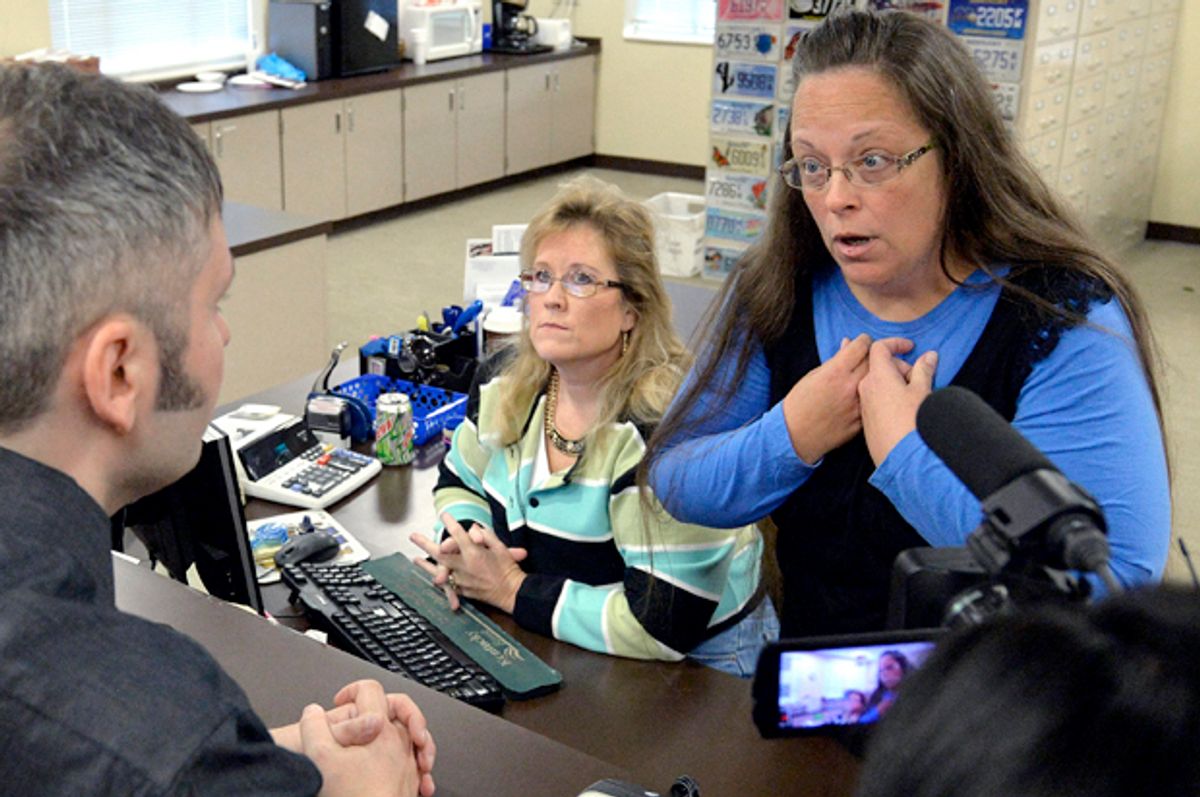 It's a narrative so familiar by now that we can all recite the script. As Sarah Thyre laid it out Thursday: "1. Jail 2. Book deal/Fox News guest 3. jillion dollar @gofundme page w/donations from fellow bigots." And with the developments this week in the case of Kim Davis, who was indeed jailed not for being a Christian but being in contempt of court, many presumed that this was the jackpot the $80,000-a-year-earning Kentucky county clerk was headed toward. But not so fast, partner.

As US News reported Thursday, "ACLU attorney Heather Weaver, who is working on the case, said there was testimony about fundraising efforts on Davis' behalf, apparently a factor in the judge's decision not to impose financial penalties." And DailyKos noted that "Plaintiffs in the case had asked [District Court Judge David] Bunning to fine Davis, but they specifically requested that he not jail her. Bunning, though, said fines would not work because others might raise money to pay the penalty on her behalf."

More speculatively but no less credibly, the fabulous tweets of @nexttokimdavis observed, "When #KimDavis gets out of jail, you all will move on, but she's going to be F__KING RICH AND WORSE."

The expectation that part of the Davis strategy included playing the victim card and letting the donations roll in has been a real and present aspect of the case. But crowdfunding has come under deeper scrutiny lately. Earlier this year, the FTC began taking a closer look at platforms like Kickstarter. This summer, Baltimore homeowner Julie Baker's campaign to fight back against an alleged homophobic neighbor via a "relentlessly gay" display raised $43,500 in a few days — and serious questions about whether the whole thing was a hoax.

But perhaps most relevant to Davis and her acolytes, back in the spring GoFundMe canceled a fundraising campaign for Aaron and Melissa Klein — the owners of Sweet Cakes by Melissa, who'd recently been fined $135,000 for refusing to accommodate a wedding cake request for a gay couple. In a statement, GoFundMe explained, "After careful review by our team, we have found the 'Support Sweet Cakes By Melissa' campaign to be in violation of our Terms and Conditions. The money raised thus far will still be made available for withdrawal…. The subjects of the 'Support Sweet Cakes By Melissa' campaign have been formally charged by local authorities and found to be in violation of Oregon state law concerning discriminatory acts. Accordingly, the campaign has been disabled."

Naturally, the duo's supporters found another site to raise money and the Kleins have been raking it in ever since. But the irritated proprietors of Sweet Cakes were nonetheless so appalled by GoFundMe's rejection of them that they declared on their Facebook page that "Satan's really at work." Since the spring, GoFundMe policy has specifically stated that "GoFundMe will not allow campaigns that benefit individuals or groups facing formal charges or claims of serious violations of the law." As AddictingInfo's Jameson Parker put it this week, maybe "watching several high-profile conservative faux-victims become millionaires by exploiting their site" just started to not seem like a great strategy.

But as the Davis case unfolds, others, meanwhile, have certainly been eager to turn her into a gravy train — Mike Huckabee is vowing an "#ImWithKim Liberty Rally" on Tuesday, and you can find out about it right next to the "donate" button on his presidential campaign button. The irrelevant National Organization for Marriage has likewise has issued a plea for "a massive mobilization of the grassroots and a ferocious public relations and advertising campaign" — and an invitation to "raise $100,000 by Labor Day." Of course, Davis and her supporters are free to find other means of shaking the tree — and if she winds up getting a book deal or reality show out of this fiasco, let's not be shocked. Disgusted, sure, but not shocked. But while Davis may yet turn a profit from her determination to not do her job, good for sites like GoFundMe for taking a stand and saying they don't want to be any part of making her rich.