The doomed effort to doom Donald Trump: Why he's (probably) impervious to the elite GOP's attacks

Establishment Republicans think they can derail Trump with devastating oppo research. They're deluding themselves 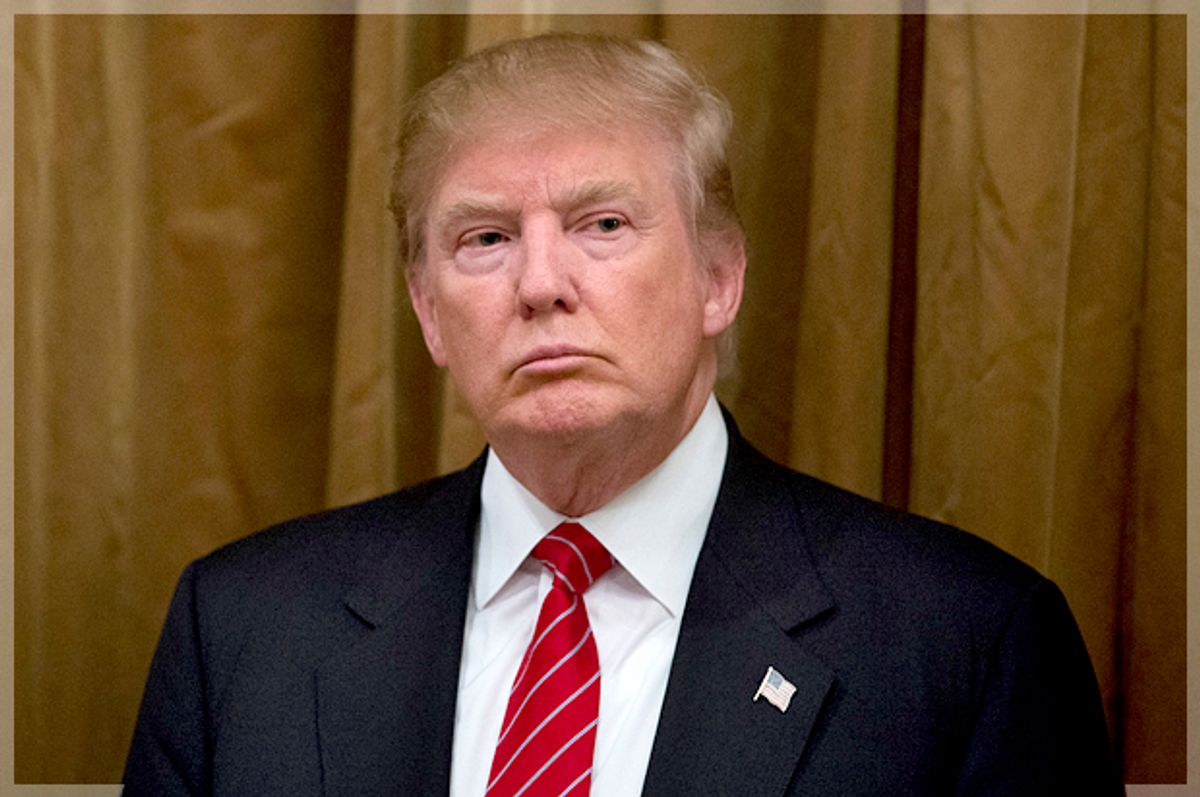 After attending Donald Trump’s presidential campaign announcement at Trump Tower back in June, some idiot wrote, “There is no way this man is a serious candidate for president, but he is pretending otherwise so the assembled members of the Fourth Estate have to pretend right along with him.” Now that Trump has spent the summer laying waste to the GOP field, forcing that idiot and the rest of the political press to acknowledge that he is indeed a serious candidate for president, the race is on to find something, anything, embarrassing enough to crater Trump’s poll numbers and force him out of the race.

This quest is of particular importance to the Republican Party, of course, and also to political media operations run by centrists whose treasured both-sides-are-the-same narrative is threatened by Trump’s continued support from xenophobic nativists and outright white supremacists. How else to explain this article from Bloomberg? Setting aside the headline’s hyperbole in suggesting that Trump has signed his own death warrant by agreeing to the RNC’s loyalty pledge, who on Planet Earth really believes Trump won’t at some point be able to talk his way out of it without denting his support?

Joan Walsh has already explained why the pledge will be meaningless to Trump. I’d go further and suggest that his most fervent fans simply won’t care. After all, Trump’s rise has been enabled by a growing hatred of the GOP among a party base disappointed time and time again that the legislators it keeps sending to Washington have not fulfilled their promises to roll back Obama’s agenda and maybe arrest the president and deport him back to his Kenyan homeland while they’re at it. The fact that our system’s setup necessitates compromise and made those promises pipe dreams even before Republican legislators voiced them matters not to the angry mob.

And Lord knows the GOP has tried to dampen the Trump wave. The snootiest organs of conservative intelligentsia have exhausted themselves explaining why Trump is not actually a conservative. (Though this poll indicates that even some self-professed conservatives aren’t always really conservatives, which must give Charles C.W. Cooke a sad.) The right-wing media – those Trump isn’t paying for good press, anyway – have tried tying him to the Democratic front-runner and other conservative boogeymen, all to no avail.

Yesterday Republican political consultant Rick Wilson, one of Trump’s most visible haters in the GOP, told CNN’s Chris Moody that there is a magnificent opposition research file on the real-estate magnate if someone wants to “drill down” on the candidate. That’s probably true, and also likely irrelevant, because as Wilson himself also said, Trump could eat a baby on live television and his supporters would love him for it. (And if this causes a lamestream media network to say it will no longer broadcast Trump’s annual baby-eating competition, that’s probably worth a four-point bump in the polls.)

Adultery? Eh, he’s an enormously rich and powerful guy on his third marriage. Plus, he’s never claimed to be a model of moral rectitude on that front. Even evangelical Christians don’t care, according to the polls. Shady business dealings? He’s in the casino and real-estate business in Las Vegas and Atlantic City, so would anyone be surprised to learn he might have greased a few mob palms along the way? He might not be worth as much money as he claims? So what, he’s still worth several billion dollars. Considering how the GOP has spent years venerating the accumulation of wealth and business success, and how many of its upper-class members have done so within what the base sees as a rigged system, it’s hard to see many Republican voters begrudging Trump his success to the point where they come to dislike him.

This is not to say there is absolutely nothing in Trump’s life that could hurt him. Surely Wilson and any other campaign operatives digging through the mogul’s garbage will leave no stone unturned. Short of finding that Hillary Clinton deleted the emails in which Trump agreed to be her secret plant in the Republican primary, though, it’s hard to imagine any attack breaking through. And any attack that comes from someone seen as part of the GOP establishment is likely DOA, so Wilson et al. are going to have to find another way to smuggle it into the public square.

The thing is, any scandal is unlikely to be so embarrassing that Trump can’t talk his way out of it with his supporters. This is where some of the GOP’s old attacks on Obama – that he is a callow affirmative-action case who wins election more because he’s built up his own cult of personality than anything else – have really come back to bite them. Now they have a candidate who really does owe his popularity to his own cult of personality and is impervious to all their attacks. So far at least, the party is still using an old and outdated playbook.