You Must Hear This! Thelma Houston's "If This Was The Last Song" 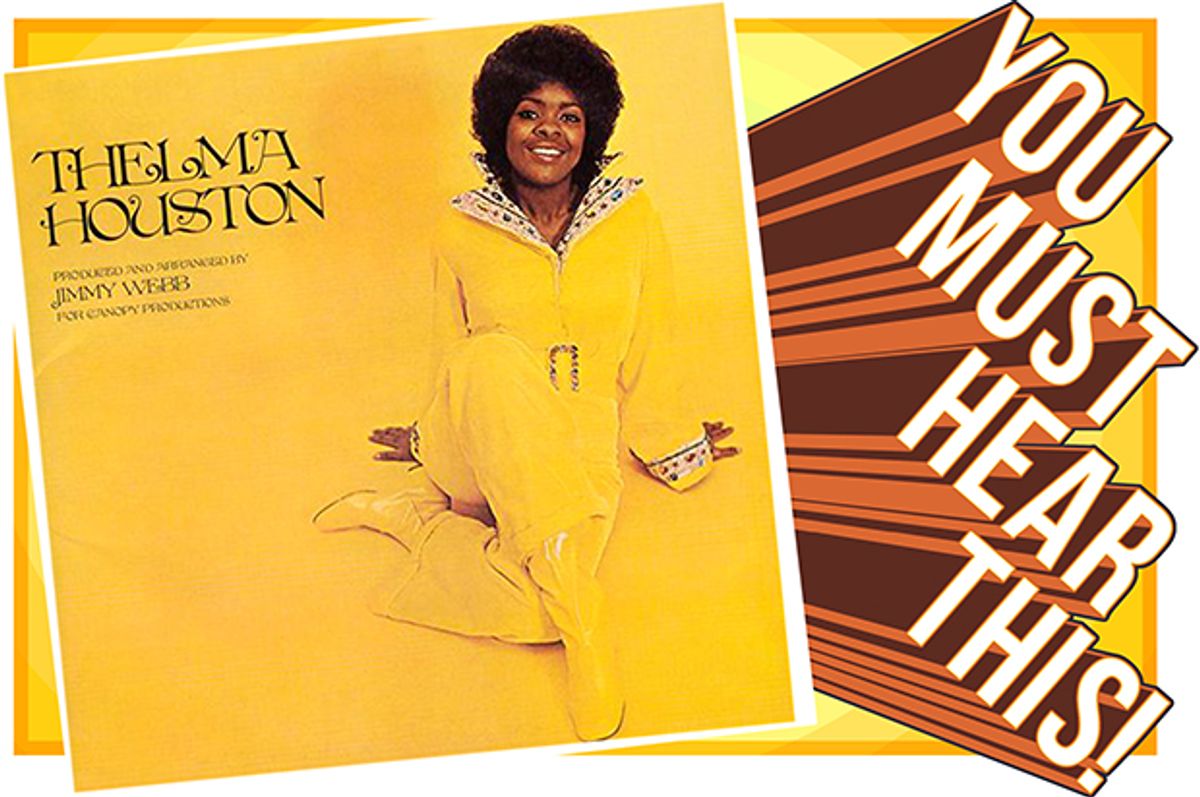 Thelma Houston is best known for "Don't Leave Me This Way," her soaring disco classic that hit Number One in April of 1977. If that title doesn't ring a bell, it's still likely that you know the song – it's one of the giants of the disco era. It's got it all: raw emotion, pristine production, and a bass line that deserves its own wing in the Bass Line Hall of Fame.

But years before that song, there was "If This Was The Last Song," from her 1969 debut album, "Sunshower." Here is another beautiful performance infused with unbearable hurt, but this song inhabits a very different musical universe. This is not disco, this is Jimmy Webb.

I'm not sure what genre I would even call this song – not that it really matters. There are signposts of country, R&B, gospel... Frankly, it could have been a disaster. But Webb's songwriting, production and arrangements on "Sunshower" are ambitious and utterly fearless, and somehow it works. It really works, with Thelma Houston's remarkable voice holding it all together.

I don't want to over-analyze this song – I think it's best to close your eyes, shut down your rational brain and give yourself over to it – but, just one detail, and then on to the words of Thelma Houston herself. The thing that gets me every time is the transition from the end of the chorus back into the verse (starting at 1:20). (And if anyone else cares to over-analyze that chord progression, or any other part of the song, have at it in the comments.)

Thelma Houston and I spoke on the phone. The following has been lightly edited for length and clarity.

Can you take me back to the time of your album "Sunshower?"

Well, as best I can – that was many, many, many, many, many years ago! As a matter of fact, I spoke to Jimmy about a few months ago, and we were having a good conversation, and Jimmy feels that that was some of his best work. I don't know what he could have done at that time to have made the record company put more promotion on it.

It was a time when black women, or black people, were supposed to sing R&B. There were a few that were not – Nat King Cole – who were before my time, but when they started coming down to the pop music, a black person could not sing those kinds of songs. They wanted us to sing all R&B music, which I love, that is my roots. However, I think that because "Sunshower" wasn't a strict R&B type of record, it didn't get any attention. Which is very sad, because I think it's one of the best albums that came out of that era.

In the liner notes, Jimmy Webb called you the most prodigious talent he had ever encountered. How did he first become aware of you?

Marc Gordon, who was the manager of The Fifth Dimension, had known Jimmy. Jimmy was a writer at one time on the Motown record label – a lot of people don't know that – when he came from Oklahoma. Because of Mark's association with Jimmy, and The Fifth Dimension having that huge hit with "Up, Up and Away," he took me over to Jimmy's house and had me audition for Jimmy. Not really an audition, but for me to sing for Jimmy. And Jimmy liked my voice, and he asked Mark, "Who's going to produce her?" And so Mark said, "Well, you can if you want!" And so that's how that happened.

What song did you sing for him? Do you remember?

I don't remember. But it wasn't a Jimmy Webb song.

What was he like to work with in the studio?

He was a wonderful person in the studio. Of course, he was very young. He liked me to sing when they were cutting the tracks, to sing along. First of all, he would let me choose the songs that I wanted to sing. He would write these songs, and he said, "OK, you pick – what do you think of this, what do you think of that," and I was very naïve at the time. If a young person right now would have an opportunity to work with somebody like a Jimmy Webb at that time, and if he presented them with songs, they would probably say they liked every single thing, and they would never say they don't like this or that! However, I was very naïve, and I said "Ehh, I don't like that one!" (laughs) But he wasn't fazed. He really wanted me to like the song.

And then he would let me do my own interpretation of it, and let me sing the song how I felt it. Which was wonderful for me at the time, because up until that point I had not been given any original material. Everything I had done up to that point was either gospel music, because I used to be with a gospel group called the Art Reynolds Singers prior to doing this album – as a matter of fact, the Art Reynolds Singers are doing backup on "Jumpin' Jack Flash" on the album. And then, if I did club work at that time, it would have been necessary to try to sound as much like the artist that had recorded it as you could. So being given that opportunity to sing original material the way I wanted to do it was just wonderful.

Let's talk about "Jumpin' Jack Flash" for a second. Was it your idea to cover that song?

No, that was not my idea. You know, [Jimmy Webb] really liked "Jumpin' Jack Flash." He loved it, he thought that was the best thing ever. And he wanted me to sing that song, and I went, "Oh God, why do you want me to sing that?" Finally, I had to have a talk with myself, and I said, "Don't be a fool, now, don't be so stupid." And selfish, because I was looking at it as a selfish thing. "OK, now, you've gotten to pick everything that you wanted to do on this album, and if he wants to do this..." And it turned out to be a really fun song to do.

There's a clip of you on YouTube, singing that song on "The Price of Fame." I can't tell you how many people I've sent that clip to. It's such a joyous performance!

I remember that was my first time going to England, and being asked to go on that show and do that song was great. I was excited, and you know, I was loving it!

With the song "If This Was The Last Song," Jimmy Webb really brought country and R&B and gospel together.

Jimmy was very close to his father, and Jimmy's dad was a preacher. So these are like common sense things, from his standpoint, that he had learned. Jimmy was also a piano player and musical director at his old church in Oklahoma. So, I think that was the inspiration for that song.

The way you sing it brings to my mind your singing in "Don't Leave Me This Way," in which it sounds like you're literally close to tears. Did you have to do any preparation emotionally to go into a performance like that?

No, I didn't have to go any place to get to that feeling. The words of the song lent themselves to that! The very first song that I ever sang to memory – from what people have told me, because I don't really remember all of the details – I started singing when I was about three years old. And my music at that time was only hymns. It was church music. Because the lady that was babysitting me was the piano player at the church. So she would practice her songs, and I would sing. She noticed that I would sing on key, and that I would remember the words, so that's when I was scooped up, and I started singing in church in all the little programs – the Christmas programs, Easter programs, Children's Day – whatever they had that young people could participate in. So, my backbone was from gospel music. All of the songs on that album are going to have some kind of gospel in it, because that's the basis of my singing. That was the natural way that I sang.

Did you perform a lot for "Sunshower?"

I did go on tour, because that's the only thing that I had, was that. As a matter of fact, I got on "The Ed Sullivan show."

When the album came out, I was booked at these different little spots around town. A lot of the places I worked were places where jazz artists worked. And one of the places that I worked was the Americana Hotel in New York. I was opening for Hines, Hines and Dad [featuring Gregory Hines]. And from that, I got a gig working at a club on Second Street. Upstairs was comedy, and downstairs they would have music. At that place, I met Rodney Dangerfield. And he told me that he was going to open a club, and of course I was like, "Yeah, right." I didn't say that to him, but it was like, "How is this guy going to open a club?" You know what I mean? I had no idea! And he said, [puts on a good Rodney Dangerfield] "I want you to open my club." And I was like, "Oh, sure, Rodney! Yeah, of course!" I mean, you're not going to say, "What?! Get out of here!" So, I was like, "Oh, sure, I'd love to." And, you know, forgot about it.

Well, sure enough, he opened this club called Dangerfield's, and I was the opening act for that club. And Rodney had all these people in show business that came to that club. And someone from "The Ed Sullivan Show" came there and saw me, and I think that's how I got on "The Ed Sullivan Show" without a hit record. The album was not a commercial success, but it was a critical success. It got great reviews.

Do you still perform songs from "Sunshower?"

I do. I perform "If This Was The Last Song," "This Is Your Life," "Mixed-Up Girl," and every once in a while, "Everybody Gets To Go To The Moon."

How do you think these songs fit into your entire career?

You mean how do I sing "Don't Leave Me This Way" with these songs? (laughs) Well, that's the thing about my show, which I've always done, is when you come to my show, I'm going to sing what I want to sing, and hopefully you will enjoy it. And I must say that most times, people do. It's how you place the songs. If people come to hear a particular kind of music, you can't just give them song after song of something unfamiliar to them. But if you can work it into your show, and talk to people about it? For me, it's always worked out.