America's silent-but-deadly billionaires: How our tight-lipped overlords are waging stealth campaigns against the middle class 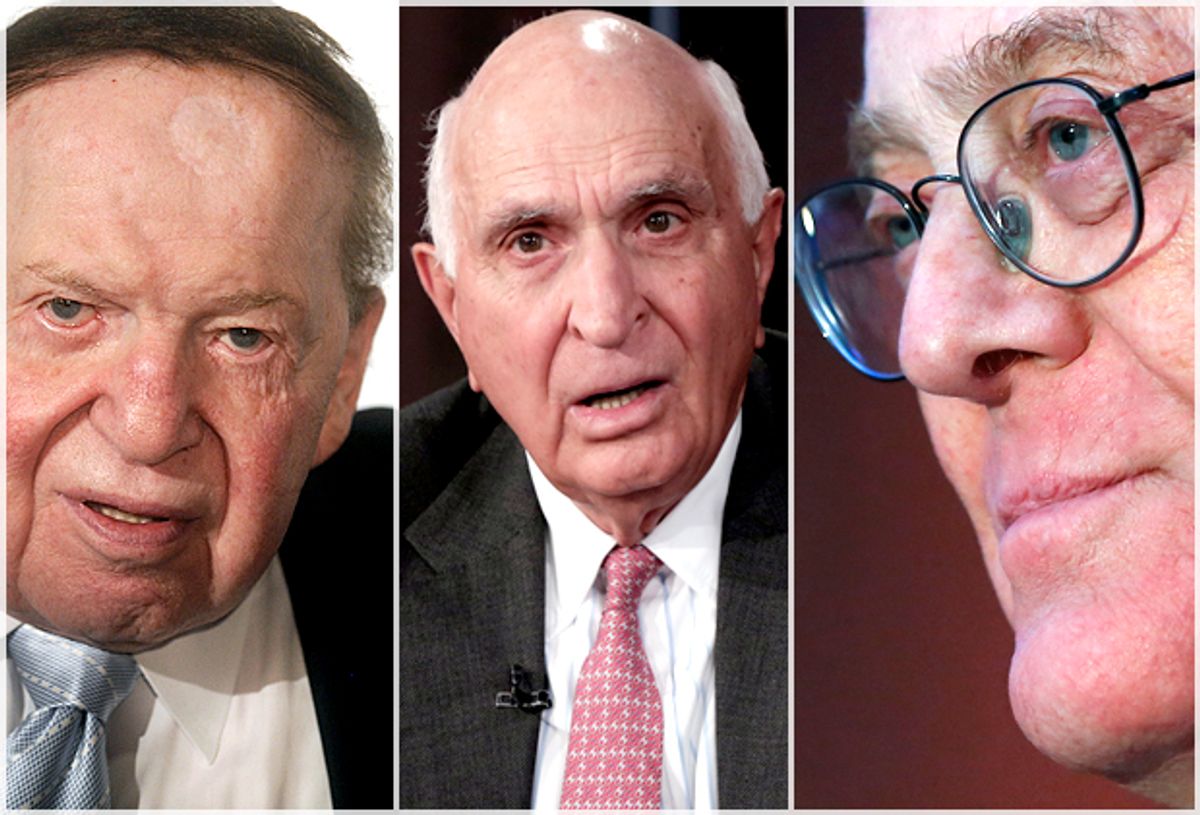 While some billionaires, like Warren Buffett, are outspoken on political issues, most tend to say very little, or speak in vague generalities. But a new working paper by political scientists Benjamin Page, Jason Seawright and Matthew Lacombe finds that what billionaires say and what they do are dramatically different. While billionaires rarely go on the record discussing Social Security and taxes, they work behind the scenes to oppose policies favored by average Americans. Often, there are deep disconnects between what billionaires say regarding policies and which organizations they fund.

The new study examines an even smaller and more insular group than the previous work of Page and Seawright: the richest 100 American billionaires. Together, the billionaires were worth $1,291 billion (more than the entire GDP of Mexico). Obviously, the billionaires weren’t going to sit down for lengthy interviews on policy priorities. Instead, the authors combed through nearly every public statement by the billionaires on two subjects: tax policy and Social Security. The project required a massive amount of work: Lacombe spent nearly 400 hours conducting the related searches. One of the first things the authors find is that even the politically active wealthy rarely take overt public stances. They write, “The Koch brothers (David and Charles) are a leading example of this: they generally combine public silence about policy with large financial contributions to political causes.” Though they intend to contribute nearly a billion dollars to influence the 2016 election cycle, they “generally make only vague political comments, if any comment at all.”

The authors dub this “stealth politics.” Indeed, only 26 billionaires (a quarter) made any statements on tax policy over the last 10 years. Of these, the vast majority of statements came from a small but politically active and visible group: Michael Bloomberg, Warren Buffett, Bill Gates and George Soros, who made 65 comments in total. Even those statements tended to be vague and rather brief. More strikingly, only three of the billionaires made statements regarding Social Security. When billionaires do make statements, they appear to be a rather diverse and moderate group. As the chart shows, when speaking on most key issues, billionaires are split pretty evenly (although they tend to favor more carbon taxes, and fewer corporate taxes). But that billionaires were largely silent and moderate doesn’t mean they aren’t concerned with more radical policies.

The billionaires the authors examined were rather active politically. One-third either hosted a political fundraiser or bundled contributions for a candidate (this compares to one-fifth of the top 1 percent of the wealthiest and very few if any average Americans). A whopping 82% of the billionaires in the sample gave to political candidates in 2011-2012, and they gave, on average, $74,982 (that’s $20,000 more than the median household income in the United States).

Brian Schaffner, a professor of political science at University of Massachusetts-Amherst and one of the lead researchers on the Cooperative Congressional Election Study (a massive survey that includes 50,000 respondents), provided data on the what the general public gives. CCES data suggest that 24% of Americans gave money in the 2012 election cycle, but only 6 percent gave more than $200. On average, the general public gave $336, meaning that the average donation by one of the super rich is 223 times more than the donation of the general public. Unsurprisingly, given other research, the billionaires heavily favored the Republicans: 65 percent of those who made partisan contributions were exclusively or primarily to Republicans. On average, each billionaire in the sample gave $53,227 to a Republican candidate and $21,411 to Democrats. To further discern political preferences, the authors took a new tack: They examined political donations to issue-specific organizations, rather than to candidates, parties or PACs. (For research on these subjects, see here). This has two advantages.

First, much of the money that's given to more moderate candidates is aimed at cultivating access and creating the appearance of “moderation.” If a billionaire wants to change policy, they are better off donating to incumbents or candidates highly likely to win than dark horse candidates that are closer to their values (a lesson the left could learn from). This argument makes sense: research shows that individuals who donate to campaigns tend to focus on ideological purity, whereas PACs and businesses spread money more widely and focus on getting access and policy results. Given the vast amounts billionaires give, it would make more sense for them to pursue the strategies a PAC or business would, not the strategies of an individual donor. Second, placing candidates on a simple left/right axis obscures more than it illuminates. Research suggests that the wealthy are more socially liberal than the average American and far more fiscally conservative. This would lead to the appearance that the rich are more in line with American values than they actually are.

The authors created a model to test stealth politics, and they find that “among those who did not speak, higher wealth led to more conservative overall patterns of political action related to taxes or Social Security.” That is, the wealthy tend not to speak out when their views would be unpopular, but rather covertly donate to unpopular causes.

The charts below show this fact rather dramatically. However, even these data understate the extent of the problem. Many of the organizations that billionaires would use to advance their political views are 501(c)4 or (c)6 organizations, which don’t have to disclose their donors.

As Open Secrets notes, "[Political] spending by organizations that do not disclose their donors has increased from less than $5.2 million in 2006 to well over $300 million in the 2012 presidential cycle.”

It will likely increase even more in the future. The first step toward reducing stealth politics includes some rather simple proposals: First, all political donations should be disclosed. While the Supreme Court has decimated most possibilities for robust campaign finance reform, this door remains open. An easy first step would be an executive order that mandates that government contractors disclose political donations. Research by Christopher Witko suggests why this is necessary: He finds that government contractors that donate more money to federal candidates receive more contracts, even after controlling for numerous relevant factors. A recent Demos report by Naila Awan and Liz Kennedy finds that 80 percent of the largest 20 government contractors don’t disclose the money they contribute to 501(c)(4) and 501(c)(6) organizations.

The United States also needs a robust public financing system, which would allow for more small donor democracy. According to Brian Schaffner, the average small donation (under $200) in 2012 was $85, meaning that to equal the $889 million the Koch Brothers plan to spend, it would take 10.5 million small donors.

There are many policies that are required for the U.S. to become a true democracy. To begin, we need to end the stealth politics of America’s wealthiest citizens and amplify the voices of ordinary Americans.