We're getting Kim Davis all wrong: What she reveals about the right's true motivations

Her 15 minutes of fame may be nearly over, but the county clerk's defiance reveals an enduring truth 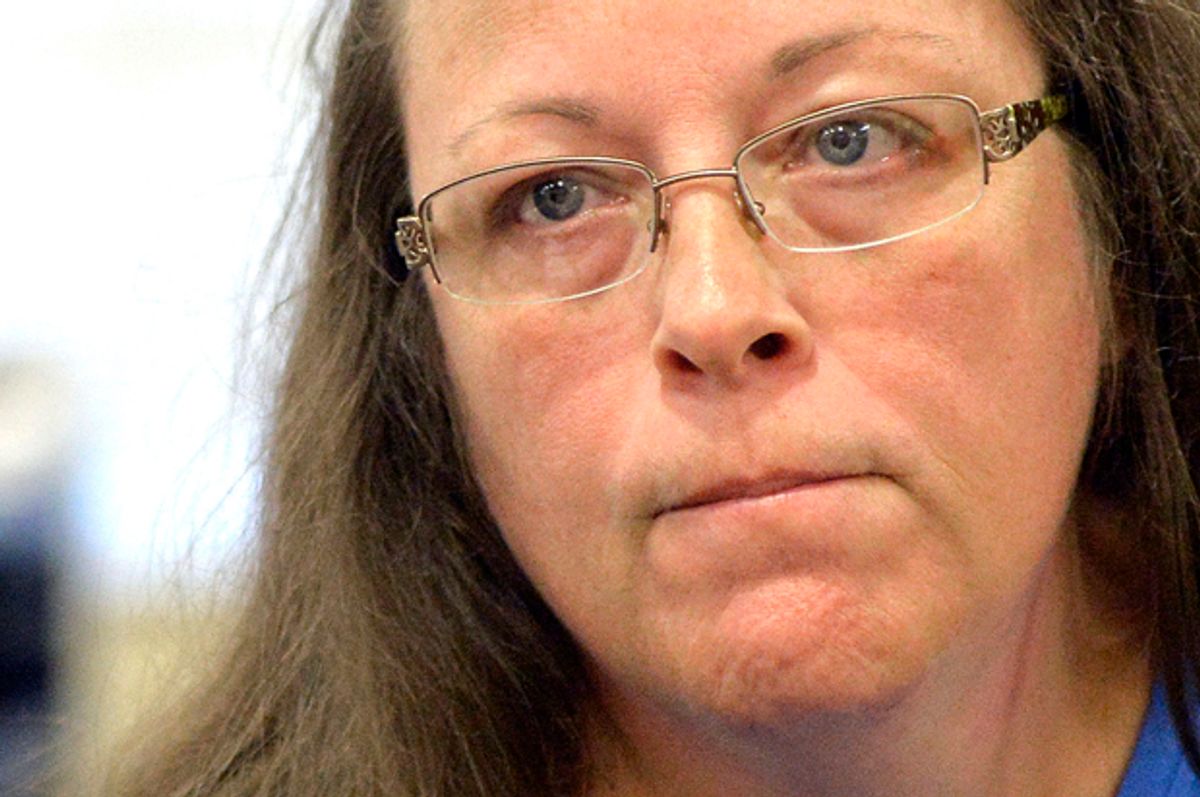 After a lengthy, dramatic and utterly pointless stand-off-cum-media circus, the story of Kim Davis, the Kentucky county clerk who refuses to issue marriage licenses to gay couples, finally reached its inevitable conclusion earlier this week. Having ignored orders from authorities as high as the Supreme Court and rejected appeals to let her subordinates grant licenses in her stead, Davis on Thursday was hauled off to jail. And as of this writing, that is where she remains — “God’s authority” notwithstanding.

Fairness requires we take the thrice-divorced Davis at her word and interpret her act of civil disobedience as a consequence of her faith. But if Davis ultimately follows the route Dan Savage forecasts and parlays her 15 minutes of fame into a career as a martyr for the Christian right, she’ll have a receptive audience. Movement heroes like Gov. Mike Huckabee and Sen. Ted Cruz are already defending her, citing her ordeal as proof of not only “judicial lawlessness” but “the criminalization of Christianity,” too.

For some observers, seeing conservative leaders so exuberantly align themselves with this self-proclaimed instrument of the Lord’s will has been disorienting. Conservatives are supposed to be the guardians of law and order; yet here they are, defending someone who quite explicitly claims to be above “man’s law.” What’s more, conservatives are supposed to loathe despotic government bureaucrats; yet here they are, defending an official who is using state power to further her own agenda.

If we apply our traditional understanding of conservatism, it doesn’t seem to add up. And it’s enough to compel some right-wingers to insinuate that Davis is no friend to conservatism, not really. But the problem isn't that Davis’ innumerable conservative supporters don’t know what they really believe. The contradiction cannot be waved away with a right-wing variation of the “no true Scotsman” fallacy. Because it’s not Davis who’s mistaken; it’s our understanding of conservatism itself.

Let’s treat this incident, then, as an opportunity to redefine our terms. Instead of holding fast to the traditional understanding of conservatism as an ideology that promotes stability, gradualism, order and restraint — none of which can be found in the Davis case — let’s see if we can find a lens that doesn't require us to squint. Rather than throw up our hands when conservatives don’t behave like they’re “supposed” to, let’s assume that it’s the actions of practitioners (and not the words of intellectuals) that truly count.

So here’s what I think is a much better definition, one that explains both the populist and the elite strains of conservatism. It comes from Corey Robin, a professor at Brooklyn College and the CUNY Graduate Center, author of “The Reactionary Mind: Conservatism from Edmund Burke to Sarah Palin,” and regular contributor to Salon. Conservatism, Robin says, is “a reactionary movement, a defense of power and privilege against democratic challenges from below, particularly in the private spheres of the family and the workplace.”

On first blush, that definition might seem broad. But I’d argue that’s to its credit. After all, American conservatism is a big tent, with room enough to fit people as dissimilar as Kim Davis on the one hand and David Koch on the other. It’s hard to imagine that the GOP mega-donor and the registered Democrat (in Kentucky, mind you) share much in common. Indeed, Koch says he’s a social liberal who supports same-sex marriage, and I doubt scrapping the Export-Import Bank is high on Davis’ “to-do” list.

When it comes to defending their “power and privilege,” however, the two see eye-to-eye. For Koch, the stakes are obvious; he’s a billionaire oil and gas magnate with clear material interests in slashing the regulatory state and lowering high-end taxes. Any government attempt to fend-off catastrophic climate change is a threat to his business’ bottom-line. And any government attempt to combat wealth inequality threatens not only his checkbook but puts his considerable philanthropy in a less-flattering light.

As a county clerk in small-town Kentucky, Davis’ power is negligible. But her privilege — specifically, the privilege of being able to marry (again and again and again and again) — isn’t. Gay marriage, which is representative of the full acceptance of gay and lesbian people into the mainstream, severely challenges the version of Christianity she’s embraced. Her (highly selective) Biblical literalism can’t allow it; and if that crumbles, her vision of herself as “saved,” as one of God’s elect, goes down with it.

To be clear, the point is not that all conservatives are the same. They’re not. But just as a socialist and a liberal can differ on many things but still share a fundamental belief in the legitimacy of redistribution, so too can conservatives find common ground in the “defense of power and privilege.” As Davis and her Republican champions show us, if there’s one organizing principle to conservatism, that — and not law, order, gradualism or liberty — is it.