Yes, his policies are racist and xenophobic. But they're also entirely divorced from reality 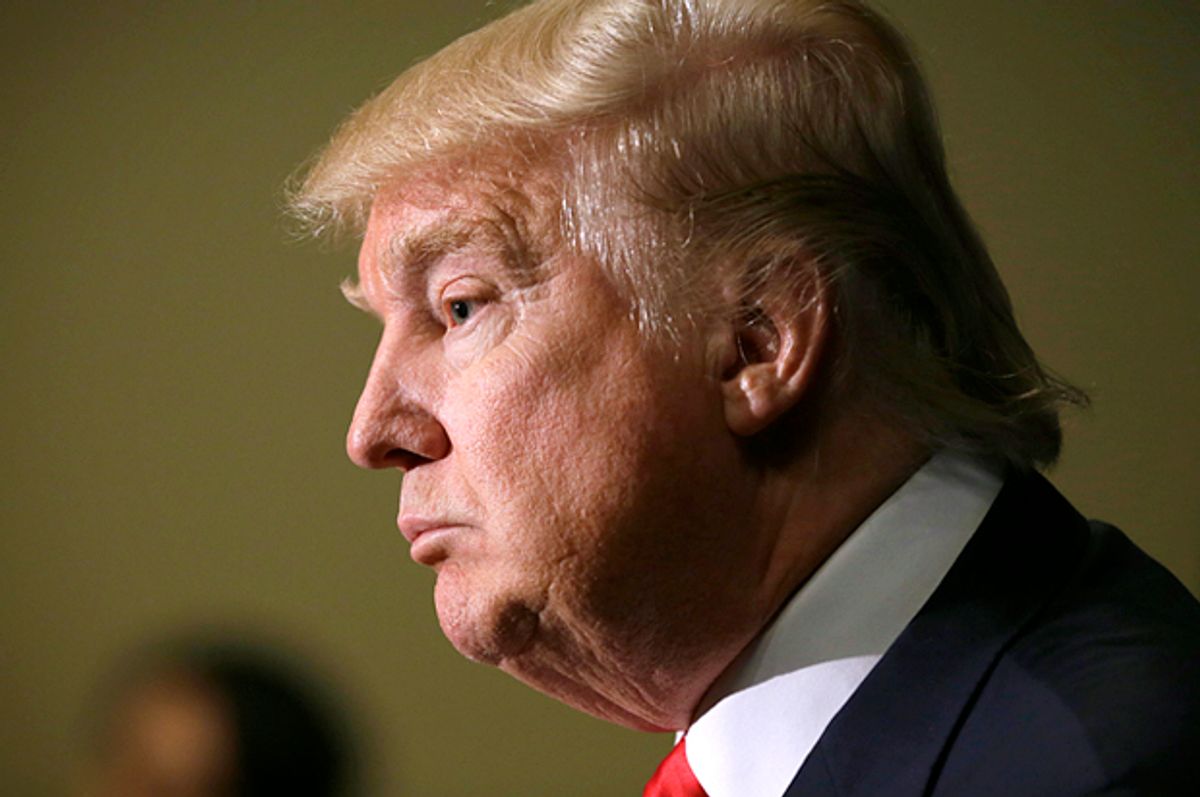 What will it take to get a majority of Republicans and an even bigger slice of Donald Trump supporters to reconsider their mistaken beliefs about Mexican immigrants and border enforcement? Though it’s unlikely, one might begin with the facts.

This week, a nationwide survey by Public Policy Polling reported that 51 percent of Republicans—and 63 percent of Trump supporters—would support a constitutional amendment to take U.S. citizenship away from children born in this country to the parents of undocumented immigrants. Their support for this exceptionally punitive measure, which, practically speaking is going nowhere, follows Trump’s ongoing and unapologetic comments that illegal Mexicans are a source of American woes.

Yet, according to academics and other demography experts, what’s been happening in the real world of U.S.-Mexico immigration trends and border enforcement is exactly the opposite from what Trump is bellowing and his flock is nodding their heads to.

The facts are that undocumented Mexican immigration has been going down during all of President Obama’s tenure; it peaked in 2007. Moreover, Trump’s remedy—a new wall—has largely been in place (fences, sensors, drones, patrols). But because his white and aging following grew up in a less diverse America following World War II, it will be hard to dislodge their racist perceptions and xenophobic views.

Here are seven facts that Trump and his flock are ignoring:

1. Undocumented Immigrant Numbers Have Fallen. According to a July report by the Pew Research Center, the total U.S. population of undocumented immigrants in has fallen in recent years and was 11.3 million people in 2014. “The population has remained essentially stable for five years, and currently makes up 3.5 percent of the nation’s population. The number of unauthorized immigrants peaked in 2007 at 12.2 million, when this group was 4 percent of the U.S. population.” In other words, this cannot be called a beckoning and burgeoning crisis.

2. Undocumented Mexicans Have Declined As Well. Pew noted that while Mexicans comprise a little more than half of all undocumented U.S. immigrants (52 percent), their numbers have been declining. “There were 5.9 million Mexican unauthorized immigrants living in the U.S. in 2012, down from 6.4 million in 2009,” according to Pew estimates.

Again, Trump is portraying a false boogeyman. Other academic experts who have studied the issue for years, such as academics at Princeton University’s Mexican Migration Project, describe the trend even more starkly. “Net unauthorized migration from Mexico to the U.S. has been zero or negative since 2008,” its research team wrote in the winter 2014 edition of International Migration Review.

3. As Mexico Ages, Would-Be Immigrants Shrink. Those demographic changes are a shrinking number of 15 to 24-year-olds in Mexico—the age cohort of the largest cohort of immigrants, the Princeton researchers found. This age group was only 18 percent of the population in 2015, The New York Times reported. That’s down from 22 percent in 2009 and is expected to fall to 16 percent in 2015, it reported. So, here too, is another factor that lessening unauthorized immigration from Mexico—not increasing it.

4. Last Summer’s Border Crisis Doesn’t Change These Trends. In 2014, an estimated 60,000 unaccompanied children from Central American massed at the border, seeking to get into the U.S. and prompting the federal government to set up processing centers—as Republicans criticized Obama for not taking a tougher approach. (They ignored that his administration had deported more migrants than any prior White House.) That refugee crisis was reflected in recent Census data, which has lead some republicans to suggest that a new historic tide of immigrants was beginning.

The Center for Migration Studies asked in a mid-August analysis if there was a surge. It concluded, “it is highly improbable based on: (1) the essentially unchanging patterns of apprehension data in the past few years; (2) the fact that the higher numbers in 2014 and 2015 are within the range of previous random fluctuations in the CPS data; and (3) the likelihood that the numbers for recent years partially reflect the return migration of previous legal residents; and (4) the fact that at least one of the conditions that brought about the significant reductions in unauthorized immigration over the past 15 years – enhanced immigration enforcement – is still in place and in fact has been augmented in recent years.”

5. More States Are Seeing The Undocumented Leave Than Stay. Before following up on the Center for Migration Studies’ last point—that until Obama issued his executive orders suspending some enforcement, his administration was deporting migrants—it’s worth noting that more states have seen undocumented populations fall than rise.

As Pew reported, “From 2009 to 2012, several East Coast states were among those with population increases, whereas several Western states were among those with population decreases. There were seven states overall in which the unauthorized immigrant population increased: Florida, Idaho, Maryland, Nebraska, New Jersey, Pennsylvania and Virginia. Meanwhile, there were 14 states in which the population decreased over the same time period: Alabama, Arizona, California, Colorado, Georgia, Illinois, Indiana, Kansas, Kentucky, Massachusetts, Nevada, New Mexico, New York and Oregon. Despite a decline, Nevada has the nation’s largest share (8 percent) of unauthorized immigrants in its state population.”

6. Not A Major Slice Of Job Market. Trump has also blamed unauthorized migrants for taking American jobs. But Pew also reported that “unauthorized immigrants make up 5.1 percent of the U.S. labor force,” saying that in 2012 there were 8.1 million people “either working or looking for work.” These are some of the lowest-paying jobs in America, not wanted by many people. Pew also said 7 percent of K-12 students have an undocumented parent, athough 80 percent of those youths were born here—the cohort that Trump and a majority of Republicans would penalize by revoking their U.S. citizenship.

7. Building A Bigger Wall Is A Big Myth. Trump’s solution to the non-existent migrant crisis is its jingoistic counterpart, building a bigger border wall. But as The Times noted, border enforcement under Obama has expanded—and the U.S. undocumented population has fallen and leveled off. Border personnel doubled since 2004, more than 650 miles of fencing and sensors built, and drone monitoring has been instituted. That’s both reduced illegal immigration, the Times said, while boosting smuggler profits and making the crossing far more dangerous. Moreover, “the rising cost of entry… ensured that those who made it stayed,” it said, citing experts at Princeton’s Mexican Migration Project.

In other words, building a bigger and better wall, as Trump bombastically suggests, would fuel the smuggling economy and ensure that most unauthorized migrants would not periodically return to their native countries, but remain here. It is a stark solution for an imagined problem that recent experience has shown would backfire.

“Mr. trump could blame the browning of America at least in part on the wall,” the Times reported. “In a cheeky bit of counterfactal analysis, the three [Princeton] researchers estimated that the tightening of border enforcement since 1986 actually added 4 million people to the population of immigrants living illegally in the United States in 2010.”

As that Times report concluded, “Analytical quibbles are unlikely to sway Mr. Trump or his followers.” And a separate Times analysis, by Thomas B. Edsall, explained why.

It’s not just that “a half-century of Republican policies on race and immigration have made the party the home of an often angry and resentful white constituency,” he wrote. It’s also because that Republican constituency “is now politically mobilized in the face of demographic upheaval.” What Edsall is referring to, and traces, is the growth of the U.S. Hispanic population—citizens and non-citizens—over the lifetime of Republicans in Trump’s generation. In short, many aging white Republicans feel threatened by an racially diverse America.

This past June, 63 percent of Republicans told Pew’s pollsters that immigrants were a burden. And last October, 52 percent told the Public Religion Research Institute that “discrimination against whites has become as big a problem as discrimination against blacks and other minorities.” These findings confirm that in politics and life, fears and beliefs—however misdirected and mistaken—often reverberate at deeper levels than facts and sensible thinking.