The neo-Nazi next door: In "Welcome to Leith," the deeply strange saga of a tiny town, a white supremacist and a crazy dream unfolds

An infamous white racist tried to conquer a farm town — and the locals fought back. But that's not the whole story 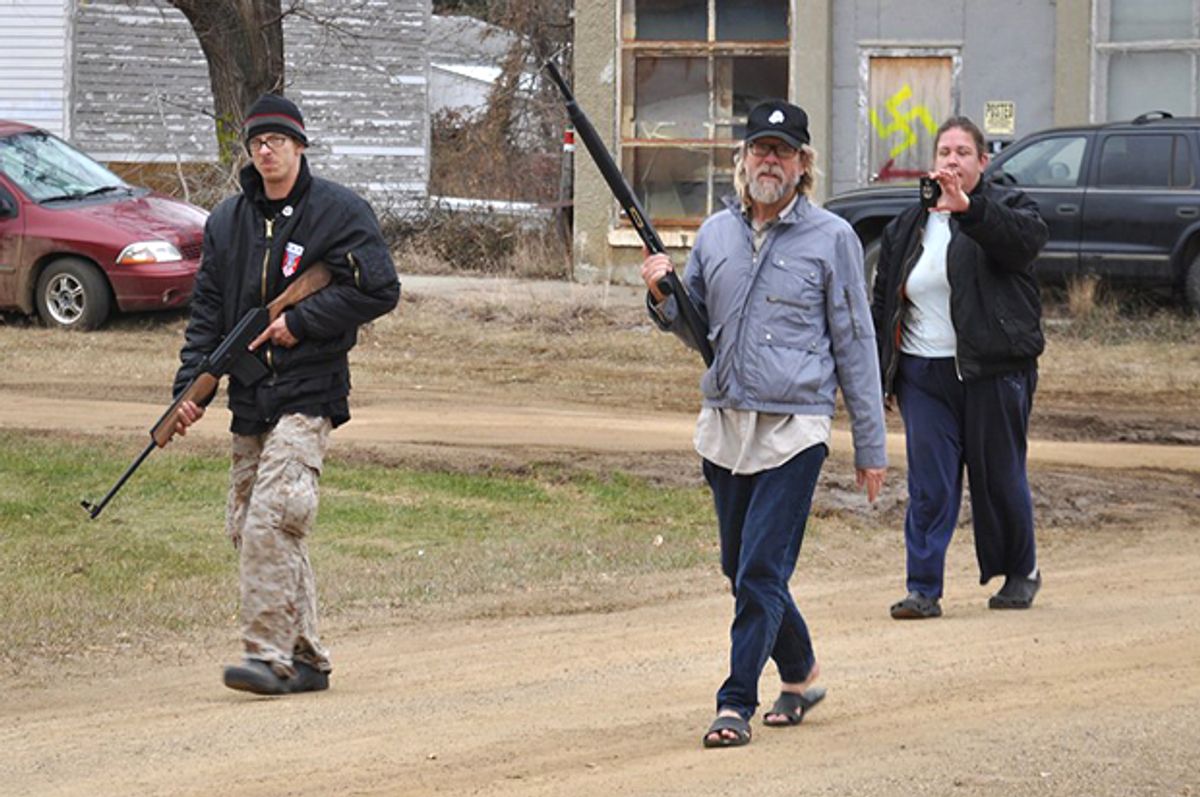 You might go into “Welcome to Leith,” the widely praised Sundance documentary about a white supremacist who tries to take over an infinitesimal town on the North Dakota prairie, with certain expectations. Even the reviews I have glanced at — I try to read few or none before writing my own — seem to respond to those expectations or assumptions at least as much as to Michael Beach Nichols and Christopher K. Walker’s film. Is “Welcome to Leith” about the resurgence of openly racist hate in America, arguably one of the viral strains nurturing Donald Trump’s presidential campaign? Is it about the limits of First Amendment freedom, or the pluck and spirit still to be found among the citizens of America’s most desolate corners? Is it about the tireless work of the Southern Poverty Law Center, which strives to keep track of domestic hate groups and potential terrorists, a task the government has largely abandoned?

Well, it could be about some or all of those things, and it probably is a little bit. But I actually think “Welcome to Leith” is something more surprising and much subtler than that. It’s a story about deluded people in a lonely place who are all pretty much missing the point, and on some larger level that describes a whole lot more than one small town besieged by a right-wing kook. If the strangeness of this tale can be captured in a single detail, here it is: Leith, North Dakota, has only one African-American resident, a man named Bobby Harper. Indeed, he is reportedly the only black person in all of Grant County, a 1,600-square-mile swath of ranchland and rolling hills along the South Dakota border whose population has been in steady decline for 90 years. (Around 10,000 people lived there in 1930; fewer than 2,400 do today.) When a shaggy white supremacist named Craig Cobb came to Leith and started buying up property, he wound up moving into a ramshackle house that was virtually next door to Harper and his white wife.

I suppose Cobb saw Harper’s presence in Leith as further evidence of how badly white American values have deteriorated, but the subject never directly comes up and in the context of the whitest and emptiest part of North America, deciding to live next to a black man feels like a deliberate decision. On Cobb’s fanciful map of Leith as a future white supremacist commune and breeding ground, the Harpers’ house is described as an “interracial compound.” That is distinctly unnerving, as is the unhinged and abusive rhetoric Cobb directs at anyone and everyone outside his tiny, inbred circle of neo-Nazis and “white identity” activists. I was going to offer mild criticism of the filmmakers for not explicating the references to “Credo 64” found all over Cobb’s property and literature, but after a few minutes on the Internet trying to decode his obscure quasi-religion, I no longer want to know. ("White terrorism is good," pretty much.) But Nichols and Walker do not fall into the mistake of viewing Cobb as a powerful and terrifying figure at the head of some racist guerrilla army.

Cobb may well be dangerous, or may have been dangerous at some point. His ideology is not harmless, and someone could easily have gotten killed in Leith during the confrontations between Cobb and his followers, local residents and the police. (Events that brought more reporters to Grant County within a span of a few weeks than had ever been there in its entire history.) But by the end of the film Cobb is an old man in white sneakers in a Motel 6, leaving unreturned phone messages for other white supremacist leaders and by his own account spending 18 to 20 hours a day trolling people on the Internet. He is polite and even pleasant to the African-American woman at the front desk. With his fresh prison haircut and, one might suspect, a recent infusion of psychiatric medication, Cobb bears some resemblance to a normal person, albeit a sad, defeated and lonely person with noxious political views.

If you’ve seen the movie we can debate this, but while it is entirely understandable that the citizens of Leith (all 24 of them, counting the children) found Cobb to be a profoundly unpleasant neighbor and wanted to drive him out of town, the charge on which he finally gets arrested is dubious at best. Being a crazy and abusive asshole is illegal under certain circumstances, yes, and it’s possible that when Cobb wandered around town carrying a loaded shotgun and yelling at people, he crossed some legal boundary. But he did not point the weapon at anyone, threaten to harm anyone or visibly trespass on anyone’s property, and when Cobb’s weasel-like factotum and only visible follower, a scrawny Gulf War vet and “national socialist” named Kynan Dutton, protests that they are being persecuted for their political opinions, he kind of has a point.

Neither the people of Leith nor anyone else should feel especially sorry for Cobb, but he comes off here as a person in need of a mental-health intervention, not the prospective leader of a neo-Nazi insurrection. As for Dutton, I couldn’t get over the sense that he was actually a fictional character being played by Paul Dano or the young Steve Buscemi in some Coen brothers movie I had never seen. He decorates the front yard of Cobb’s shabby little house (which has neither running water nor indoor plumbing) with the flags of various “white nations,” many of them entirely imaginary. One of those is the purported flag of the National Socialist Movement (of which he may be the only member), a variant of the Union Jack he calls the “Britannia flag,” pronounced bri-TAY-nee-ah. Bits of the story are told through home video shot by Dutton’s girlfriend, an ebullient and large-spirited person who constantly tries to buck him up by calling him her “lover” and her “honey” and expressing lascivious delight at his “sexy-ass guns.”

Maybe we can sum up this fascinating film by saying that racism and white supremacist ideology are a problem and our inconsistent understanding of free speech and its limits is a problem and the social isolation and enduring economic depression afflicting remote heartland communities like Leith are a problem. But the way those things come together in this strange tale of a small-town newcomer and his crazy dream — it’s like “The Music Man,” except really, really depressing — illustrate a different problem that is not easy to pin down. I guess it amounts to the fact that we live in a country that is deeply confused about pretty much everything, where we tend to blame our problems on the wrong people.

“Welcome to Leith” opens this week at the IFC Center in New York and the Gateway Film Center in Columbus, Ohio. It plays Sept. 10 only in West Jordan, Utah, and Sept. 15 only in Salt Lake City; opens Sept. 25 in Bismarck, N.D., Seattle and Ottawa, Canada; plays Sept. 26 only in Mott, N.D., and Sept. 30 only in Sioux Falls, S.D.; opens Oct. 2 in Chicago and Oct. 23 in Los Angeles; plays Nov. 5 only in Boston and Milwaukee; and opens Nov. 6 in Santa Fe, N.M., and Nov. 13 in Minneapolis, with more cities and home video to follow.