A white poet, a Chinese name, and yellowface in "Best American Poetry": As "Yi-Fen Chou," a white writer toys with a racial history he obviously doesn't understand 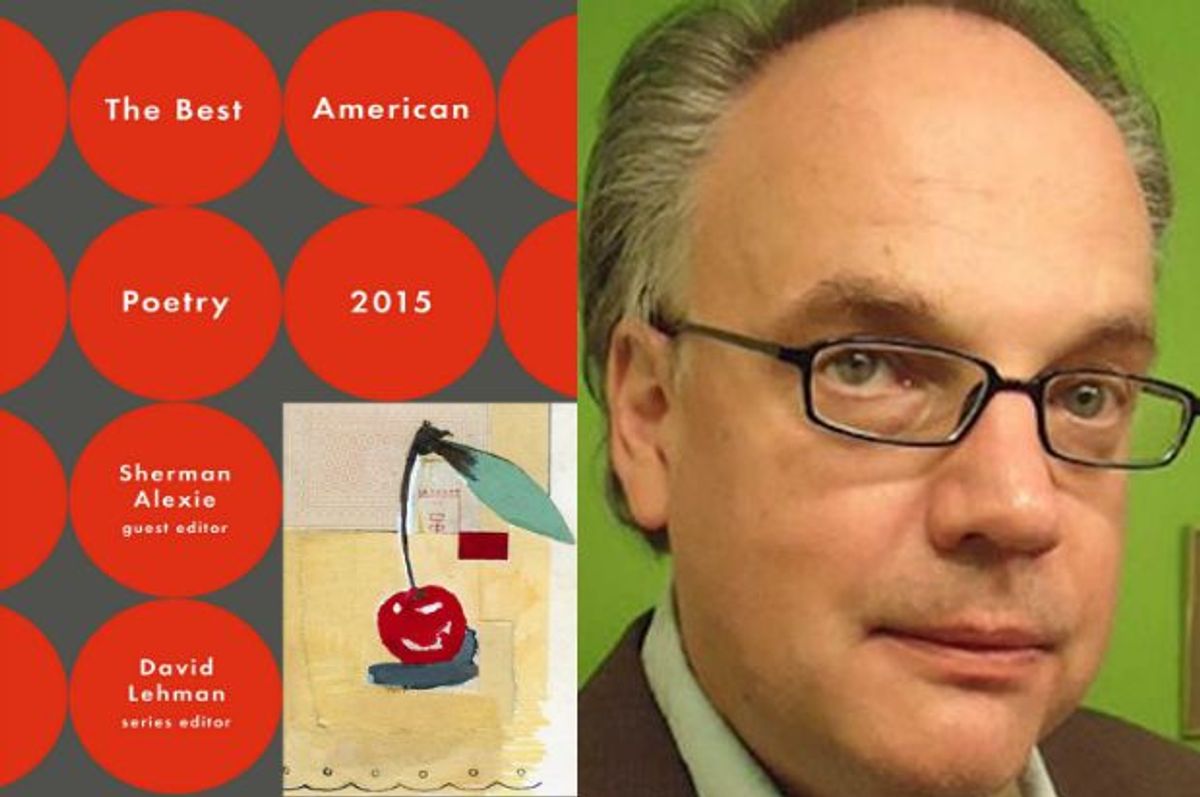 When Sherman Alexie, bestselling author of The Absolutely True Diary of a Part-Time Indian, agreed to guest-edit this year’s edition of Best American Poetry, he could hardly have predicted he’d be in the center of a literary scandal. After evaluating at least a thousand poems, Alexie ended up with 75 deemed worthy for the anthology. Among them was “a strange and funny and rueful poem written by Yi-Fen Chou,” Alexie related, which turned out to be “a Chinese pseudonym used by a white male poet named Michael Derrick Hudson as a means of subverting what he believes to be a politically correct poetry business.”

Is "reverse racism" alive and well and living in Poetryville?

There is no precise term for Hudson’s ruse, which goes beyond the time-honored literary practice of adopting a pseudonym, which frequently included the subterfuge of changing one’s literary gender. George Sand, George Orwell, and George Eliot were all nom de plumes, and two of these Georges were female. Adding a racial component is something different, especially when the pseudonym is an explicit signifier of minority status and claims the marginalized position of the female poet of color (“Yi-Fen” is a woman’s name).

Far more common is the reverse, as seen in the example of 20th-century author Leslie Charteris, who wrote the bestselling Simon Templar/The Saint mysteries, which later became the impetus for a hugely popular television series in the 1960s. Not only was Leslie a man, he was Hapa: half Singapore Chinese, half British English. His given name was Leslie Charles Bowyer-Yin.

How come nobody complains that the half-Chinese Bowyer-Yin took a British pseudonym? Didn’t “Yi-Fen Chou” just do the same thing in reverse? There have been umpteen essays explaining why "reverse racism" is not a thing, but a letter written by Charteris in 1946 puts the flow of power in relationship to race into historical perspective.

In the 1930s, Charteris was working as a war correspondent and a screenwriter for Paramount Pictures, so he applied to immigrate to the United States, since he was spending all of his time in this country. To his surprise, he found himself running up against the Asian Exclusion Act of 1924, which defined “Orientals as all people with 50% or more of ‘Oriental blood’ and forbidding them admittance.” Ruefully, he also noted that he couldn’t fill out the U.S. forms asking him to state his race, “because there are no stock names for a 50-50 split.” Having lost his English accent and feeling a stranger in Britain, he reapplied to immigrate with a letter from General Theodore Roosevelt to Ambassador Joe Kennedy. In 1942, President F.D. Roosevelt signed a special act of congress granting Charteris permanent residency in the US. In 1946, he became an American citizen.

Charteris did not speak of bigotry, social snubs, bullying, or any of the ordinary indignities he endured as mixed-race man in the early 20th century. He pointed to an American government policy that specifically targeted “Orientals”—the very definition of institutional racism. Then, during WWII, the U.S. began rounding up American citizens of Japanese descent and shoving them in internment camps at the exact same time that Congress made Charteris a special resident of this country.

If Hudson were thrown into a time machine back to 1942, would he have immediately changed his name to “Miss Yi-Fen Chou” in order to get some of those “Oriental” privileges that, in his mind, surely made Charteris a bestselling author even as Midwestern shlubs like himself were being overlooked by Hollywood? The Exclusion Act didn’t end until 1952, so Hudson would have to conveniently overlook the xenophobic hatred heaped upon thousands of Asian-Americans, because just one mixed-race author was being widely published.

Okay, so maybe Hudson wouldn’t have changed his name back then — but what does this history have to do with the state of being a writer today? Politics have changed. Aren’t we all living in P.C.-world? The white male poet is embattled! Oppressed! It’s all PoC and LGBTQ rights now — isn’t it?

Well, in 2013, writer Jim Danger Coppoc decided to figure out if the literary canon was in fact made up of Dead White Males. After cross referencing four canonical poetry resources -- the National Endowment for the Art’s “Poetry Out Loud” program, the American Academy of Poets website; the Norton Anthology of Poetry; and Wikipedia’s “List of Poets from the United States”-- Coppoc ended up with 75 poets who appeared on all four lists. Coppoc determined that the canon was indeed White and Male, if not so very dead, insofar as nearly 90 percent were very much alive during the 20th century. Only one of the 75, Li Young Lee, was Asian American. Just one. So much for Hudson’s notion of privileged Asian poets.

From a statistical standpoint, every analysis has pointed up the overwhelming whiteness of the literary world, a bleached state historically even more blinding in Poetryville. Aside from the Poetry magazine count, there is no genre-specific breakdown for the VIDA count, which focuses on the percentages of women getting published in prestige outlets (some of which publish poetry in addition to prose). But, insofar as the name “Yi-Fen” raises the question of gender-bias in publishing, it is worth noting that the most cursory look at the VIDA numbers released in 2015 reveals a terrible imbalance that becomes positively abysmal when race is added into the equation. In nearly every chart looking at the publication success of female writers of color, it’s back to “just one.” Just one, maybe as many as three, Asian writers per outlet, compared to hundreds of white writers.

Though it sometimes seems like an exercise in box-checking, diversity is more than a symbolic capitulation to identity politicking. Encapsulated in names such as “Jhumpa Lahiri” and “Chang-rae Lee” is a universe of lived struggles large and small that confront minorities daily. A Chinese woman writing from Fort Wayne, Indiana, who writes that “every goddamned thing’s reduced to botched captions” (this being a line from Hudson’s accepted poem for BAP), imparts a level of subversive irony impossible for Hudson-as-Hudson to convey, even though he’s the one actually living in Fort Wayne. Because “she” would experience cultural distancing from Midwestern traditions impossible for a non-white woman to fully inhabit, and her mastery of epithets such as "goddamned" are gendered sites of linguistic challenge. (Think of Clint Eastwood's character, Walt Kowalski, in "Gran Torino," teaching a Hmong boy named Thao how to swear correctly. He does not teach Thao's sisters this particular skill.)

Which is the final irony in Hudson’s situation, for an unabashedly Midwestern perspective is also one that is arguably marginalized in a genre dominated by coastal urbanites and marked by class privilege. If Hudson had attempted to find his own voice instead of using Yi-Fen as an “extradiegetic edge,” he might have created a poem capable of standing on its own merits. Instead, he produced what Brian Spears called “Yellowface in Poetry.” Or, maybe, he just committed “fraud de plume.”