Here’s what to watch, including a new Ryan Murphy show and the return of "Fresh Off the Boat" [UPDATED] 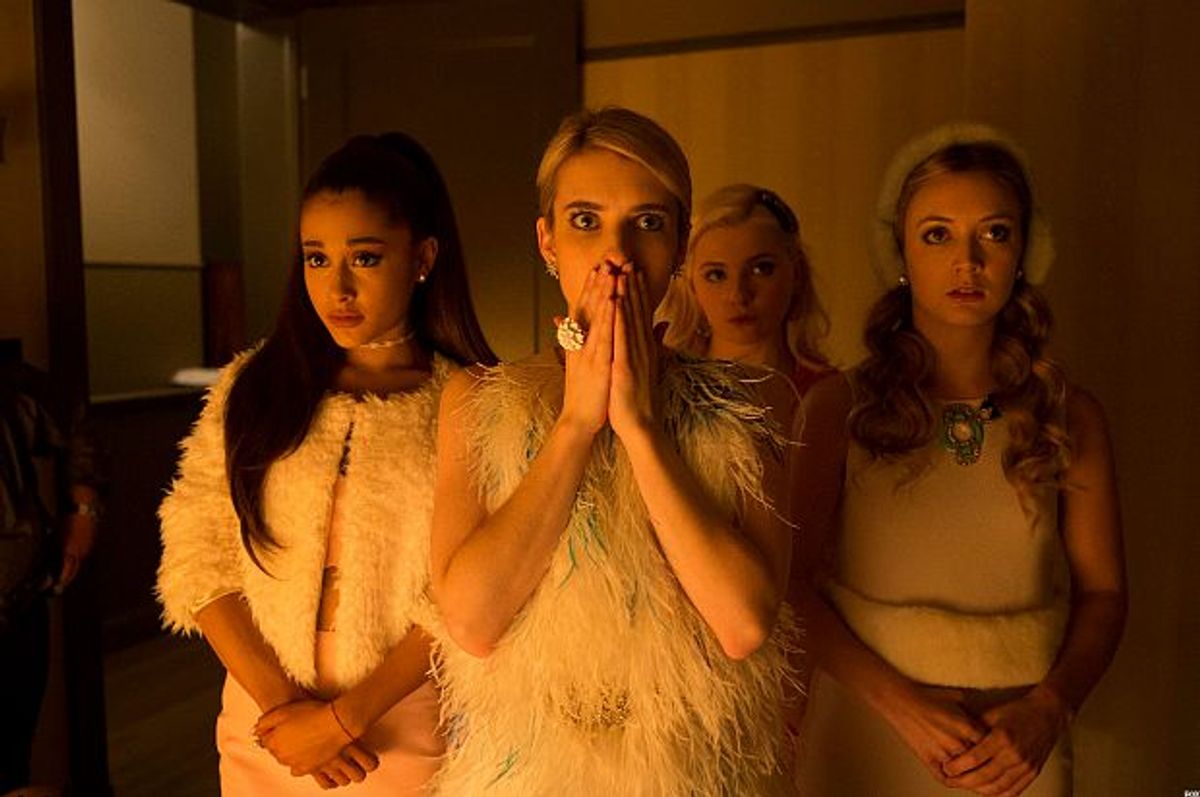 ABC and Fox are the big competitors for my attention on Tuesday nights. ABC has the one-two punch of a show I love and two shows I’m very curious about; Fox has a lineup that I feel can best be described as a smorgasbord of the absurd. Also at play are two historical dramas that could make for great next-day or binge-watching material.

“The Muppets,” 8 p.m. on ABC. Debuts September 22.
“Fresh Off The Boat,” 8:30 p.m. on ABC. Returns September 22.
Whatever “The Muppet Show” might have meant to you, “The Muppets” hopes to upend that. The new comedy on ABC is positioning itself as an “adult” Muppets, and has already started priming the pump by circulating the storyline of Kermit the Frog dating a pig named Denise (instead of his true love, Miss Piggy) not as a dramatic premise, but as gossip fodder. These will be Muppets attuned to the life cycle and industry realities of unscripted television and the celebrities that spawn from it; these are Muppets who know about (and are competing with) the Kardashians. Developer Bill Prady—co-creator of “The Big Bang Theory”—started his career with Jim Henson, so he’s qualified. But although the Muppets are beloved, and I absolutely will watch, nothing I’ve seen so far has really tickled my funny bone. Fortunately, that’s okay, because directly thereafter is one of my favorite comedies from last year—“Fresh Off The Boat,” about a Taiwanese-American family growing up in Orlando in the ’90s. In season one, the show was definitely finding its voice. I’m looking forward to seeing what showrunner Nahnatchka Khan and the talented cast have to offer this season.

“Grandfathered,” 8 p.m. on Fox. Debuts September 30.
“The Grinder,” 8:30 p.m. on Fox. Debuts September 30.
“Scream Queens,” 9 p.m. on Fox. Two-hour debut at 8 p.m. on September 22.
The real draw in this bloc is “Scream Queens,” a dark, funny, absurd show about a slew of murders in a sorority house. If you never felt betrayed by “Glee” and are still watching “American Horror Story,” it is the show for you. Creator Ryan Murphy, the brains behind both of those shows, is bringing “Scream Queens” to Fox—a show with the teenage sensibilities of “Glee” and the self-aware gore of “American Horror Story.” The big gimmick of this show is that a character will die each week, which means a) a lot of stunt guests, like Ariana Grande! and b) a huge cast, right from the get-go. That includes Emma Roberts and Lea Michele, from Murphy’s last two hits; a whole slew of teen starlets, like Keke Palmer, Abigail Breslin, and Skyler Samuels; more established actors Niecy Nash and Nasim Pedrad; and oh yeah, Jamie Lee Curtis. If you like your horror campy, your teen queens bitchy, and your feminism problematic, this is likely to hit you in all the right ways.

Directly before “Scream Queens,” Fox is airing two dude-centric comedies cast entirely with stars popular in the ‘90s: “Grandfathered,” starring John Stamos, and “The Grinder,” starring Fred Savage and Rob Lowe. It’s a bit of a time-machine head-trip—was Fox’s comedy development put together by Wanda from “Bojack Horseman”?—but “The Grinder,” particularly, looks like a lot of fun. The comedy is about brothers who start a law firm, and while one (Savage) is actually a lawyer and the other (Lowe) just played a lawyer on TV. I’ll be keeping an eye on it—but Fox just replaced the original showrunner, which doesn’t inspire a lot of confidence.

“Manhattan,” 9 p.m. on WGN. Returns October 13.
The first season of “Manhattan” is an acquired taste, but once I learned to love it, I was hooked. The show tells the story of the Los Alamos research facility in the height of World War II, when American scientists were desperately trying to crack the code for a weapon that could defeat Germany. “Manhattan” gives life to these scientists, who range from cynical to suave to hopelessly awkward. The war effort filters through to New Mexico in specific and odd ways—rigorous interrogation, multi-layered secrecy, a displaced indigenous population, and anxiety dreams about nuclear holocaust. The show was created by Sam Shaw, previously of “Masters Of Sex,” and is produced by “The West Wing”’s EP Thomas Schlamme. The sensibility of both of those shows can be found in “Manhattan,” and at times, some of those shows’ flaws, too. What keeps the ship afloat is its fantastic cast, led by John Benjamin Hickey and Olivia Williams.

“Wicked City,” 10 p.m. on ABC. Debuts October 27.
“Wicked City” is quite an ambitious project, especially for a broadcast network like ABC. Like “American Horror Story” and “True Detective,” it’s an anthology series, meaning each season will tell a different story. And every story in “Wicked City” is about solving a case in Los Angeles history. This first season is a fictionalized take on the Sunset Strip Killers, which leads to material about as gory and pulpy as you’d imagine—Ed Westwick (Chuck from “Gossip Girl”) plays the murderer Kent, who stabs women to death while they’re on dates with him and then has sex with their dead bodies. On the downside, the victim in the pilot gets knifed while she’s giving Kent a blow job. (Fun, right?) On the upside, we know that the serial killer story can be subversive and gripping, such as Netflix’s “The Fall.” With Eryka Christensen and Taissa Farmiga in lead roles, “Wicked City” could turn into a fascinating take on the serial killer story. Either way, it promises some nice period shots of Los Angeles, a city that (like so many others) is best viewed in hindsight.