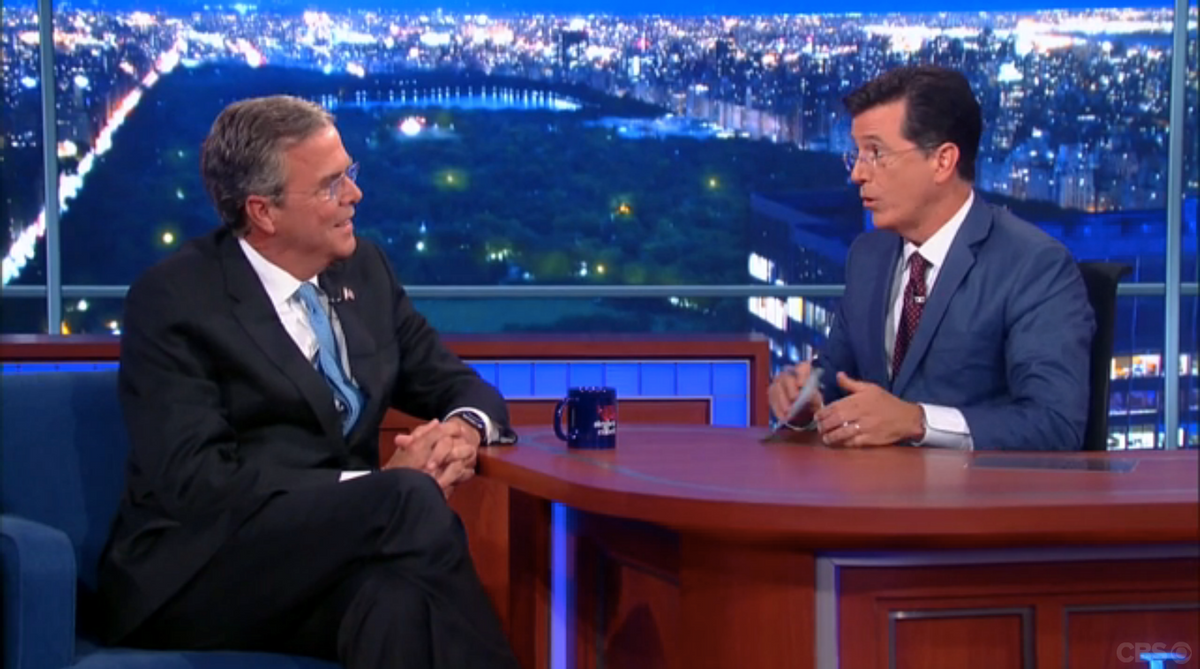 Jeb Bush was one of Stephen Colbert’s first guests on his new “Late Show,” and while Jeb! isn’t quite as exciting to watch as the exclamation mark in his campaign slogan would have you believe, Colbert’s well-honed political interview tactics made for an enjoyable conversation regardless.

After introducing his own brother and pointing out that they still love each other despite political differences, Colbert asked Bush how he differed from his brother, former President George W. Bush. Not much, it turns out: "I think my brother probably didn't control the Republican Congress spending,” Bush explained. "I think he should have brought the hammer down on the Republicans when they were spending way too much, because our brand is limited government.”

Bush also talked about how he would overcome the party divide in Washington, and almost complimented Obama in the process. As he put it: “I'm going to say something that's heretic, I guess: I don't think Barack Obama has bad motives.... I just think he's wrong on a lot of issues.”

After Colbert needled him for not pausing long enough to get the audience to clap, Bush continued to push for bipartisanship. "Look, in state capitals this doesn’t happen to the same extent that it does in Washington. In the mayor’s office you can be friends with people you don’t agree with. I mean, we have to restore a degree of civility,” Jeb said, to which Colbert responded: "I'll restore a degree of civility right now: There is a non-zero chance that I would vote for you. You seem like a very reasonable guy."

Meanwhile, in an online only clip, Bush answered a raffle winner’s question about gun control, and addressed “the big orange elephant in the room,” Donald Trump, by practicing reading some Trump-y debate answers of a teleprompter. It was fun!, sort of. Check it out below: