Fading in the polls, the huckster finds a cause célèbre for his bogus Christian persecution narrative 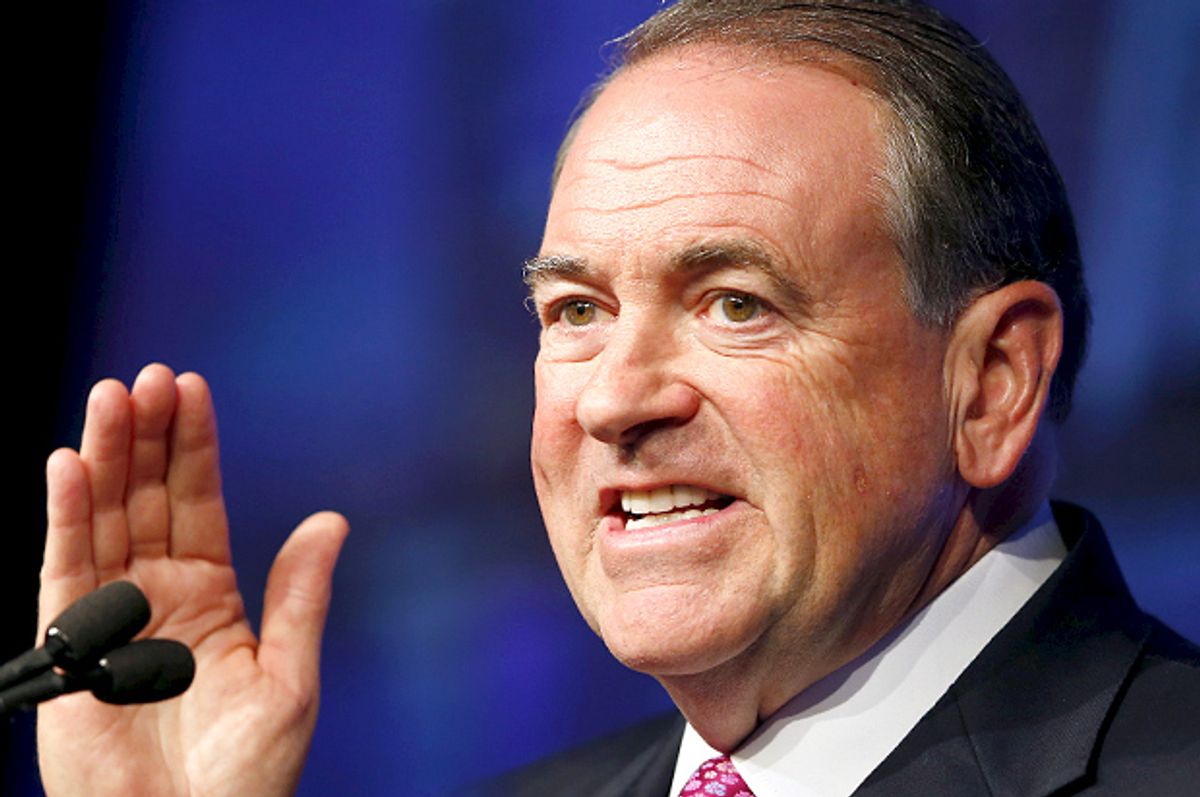 Sensing his descent into irrelevancy, Gov. Mike Huckabee has found a way to shoehorn himself back into the presidential race. He visited the latest hero of the religious right, Kim Davis, in her Kentucky jail cell yesterday. To make the most of the spectacle, Huckabee planned to stage a “Liberty Rally” (whatever that means) outside the Carter County Detention Center, where Davis was being held. Huckabee’s plan was derailed, however, when the court order was lifted and Davis was released yesterday afternoon. That didn’t deter Huckabee, though. He found his way to the courthouse just in time for a photo op with the newly minted martyr.

Huckabee's charade in Kentucky is the kind of thing we’ve come to expect from him. Since he entered national politics, his appeal has been exclusively religious. If he wasn’t mouthing religious platitudes on the stump, he’d have nothing to say – ever. His entire presidential campaign basically boils down to, “I’m a Christian and I’ll make America, a very Christian nation, more Christian.”

When Davis was arrested for contempt of court, Huckabee hurriedly took to the airwaves. He appeared on Fox News over the weekend, mounting what he seems to think is a cogent defense of Davis’s “religious liberty.” Davis was “put in jail,” Huckabee decried, “because she followed her conscience.” All of this, he implied, was further proof that Christianity has been “criminalized” in America.

That’s right, folks. The routine (and perfectly legal) arrest of a clerk in a remote county in a tiny state represents a “pivotal moment in our nation’s history.” This is quite the overstatement, even for an attention whore like Huckabee.

There are a couple of points to make here. The first is that Huckabee is wrong. The thrice-divorced Davis was not charged with "Christianity." She was arrested for violating a court order. She may have violated that order because of her beliefs, but those beliefs are not why she was charged with a crime. This is not terribly complicated. Charles Manson, for example, committed murder because he thought he was Jesus (or something like that). But Manson was not arrested for impersonating Christ; he was charged with homicide. Obviously, Manson’s crime and Davis’s crime are not at all comparable, but the logic is more or less the same: It’s the crime itself, not the criminal’s motive, that matters (there are exceptions to this rule, but they don’t apply in this case).

Huckabee (and Davis) are confused about what happened here. Davis is a public official and as such has a responsibility to perform the duties of her office. If she resigned or allowed someone else to issue the licenses as the court demanded, this wouldn’t be a story. But Davis refused to do that, and she paid a price for it. In his op-ed, Huckabee writes that “no one went to jail when San Francisco Mayor Gavin Newsom ordered city clerks to issue same-sex marriage licenses in direct disobedience to California law.” That’s true, but the difference, as Newsom pointed out on Twitter, was that those licenses were issued because it was believed that the equal protection clause of the constitution was being violated. And when the court ordered the city to stop, they complied – that’s how the law works in this country. Davis did not do that and was thus held in contempt of court. That she did so because of her Christianity is irrelevant, whether you identify with her beliefs or not.

Huckabee believes the government should “accommodate the religious beliefs” of Davis, but that’s not the business of government in a secular republic. Davis is free to be a Christian wherever and however she likes, but she can’t accept a public office and then refuse to follow the law – not without consequences, at least.

I’m fairly certain Huckabee understands this distinction, but he’s a huckster and an opportunist, so he has to play the part. Like Bobby Jindal and Ted Cruz (who also planned to visit Davis in jail), Huckabee is desperate for attention. He needs the base, especially the religious base, to remember that he still exists. Inserting himself into this story is a marketing ploy, something you’d expect from a religious entrepreneur as skilled as Huckabee.

Whatever happens next in the Kim Davis saga, Huckabee has already managed to exploit her for political gain. For at least another few weeks then, Huckabee gets to play the role of zealot-politician for religious conservatives.

I imagine Ted Cruz is none too pleased.