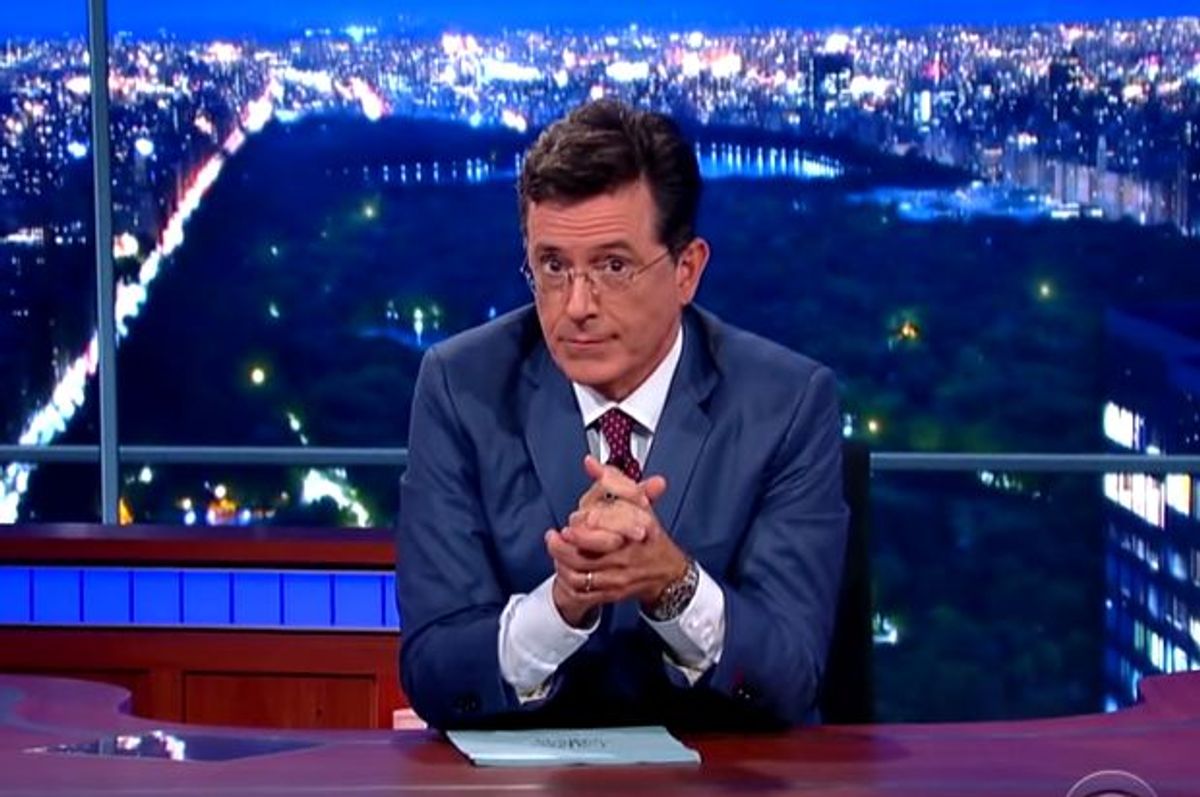 Late-night television is fertile ground for awkwardness. The form is so loose, and the content so timely, that there’s never quite enough editing done to give it that Hollywood polish. The intimacy of it is one of the reasons late-night is so eternally compelling, even if it’s watched the next day in clip form. There is a purely relational appeal to late-night television that is almost familiar, borne out of whatever necessity we appear to have for some casual conversation at the end of the day, and as I wrote early this year, that often makes for a form that is contradictory in nature: funny and unfunny; intimate and distant; relevant and irrelevant, as the case may be. And, yes, awkward. We are awkward creatures, after all, especially when exposed to each other for a whole hour, to be funny, without all that much editing. That’s part of the companionability of the format; we are, at times, in on the joke.

It takes a lot of confidence not to be awkward on late-night; it takes a lot of skill to be neither awkward nor too polished, which is often the other side of the coin. This is why so much of Jimmy Fallon’s appeal, for example, lies in his inherent little-boy naïveté, and why so much of Jon Stewart’s hinged on his blustering, larger-than-life humility. Putting aside, for a moment, the American audience’s fixation on merely a certain demographic of late-night hosts—which points to bigger issues about who can attain that perceived intimacy, and when—one thing is immediately clear about Stephen Colbert as the anchor of “The Late Show”: He’s very good at it. It’s impossible to take the measure of a show based on the first episode, but given the most superficial of impressions, the immediate takeaway is assurance. Colbert has this in the bag; it’s now just a question of letting him do his thing.

Partly that’s because Colbert is a natural showman—which is quite different from being a stand-up comic. My friend David Sims at the Atlantic outlined some of the difficulties that “Saturday Night Live” has had with hiring stand-ups, and I think that’s a principle that applies across other late-night formats. Stand-up is often a combative and acerbic medium; improv, which was Colbert’s first comedic discipline, is a bit more about getting the audience to love you, right from the first called-out suggestion. At the Television Critics Association press tour this August, when Colbert made his first public appearance with CBS, he was positively elated to be out in front of an audience again, even if it was a bunch of cranky critics and entertainment journalists. In his persona on “The Colbert Report,” he was a bit more patriotically sober; now, his enthusiasm is palpable and infectious. Colbert is just having a great time, and it’s certainly the kind of amused, relaxed glee that marked David Letterman’s tenure on the show, even as he cobbled together so many outside-the-box ideas.

This first episode of “The Late Show With Stephen Colbert” didn’t take too many risks. I personally wasn’t particularly moved by the second interview of the night, with current presidential candidate and former Governor Jeb Bush; it was a bit too bland for my tastes, even if having political guests on a flagship late-night show is somewhat outré. Dave Itzkoff of the New York Times attended the pilot episode’s taping yesterday, and he recounted numerous little bits that were cut out of that segment; apparently, there wasn’t a way to make some of the more ridiculous stuff work. Colbert’s interview with America’s finest trophy husband, George Clooney, felt a lot more easy and natural; I laughed out loud more times than I expected to at Clooney’s fake movie, “Decision Strike,” as well as Colbert’s gift to Clooney and his wife, Amal (a paperweight reading “I don’t know you,” from Tiffany & Co., no less). It’s the monologue-interview-interview-performance sequence that appears to be in late-night’s DNA, but Colbert has a knack for making even a tired format feel fresh.

That being said, “The Late Show” will have to evolve, sooner rather than later. Colbert’s semi-nerdy cool-dad shtick feels new right now, as does his friendly camaraderie with Jimmy Fallon and his little digs at CBS’ programming, but his Comedy Central audience will be hoping for something a bit more intellectually stimulating than movie promotion and musical guests. The political angle was left almost entirely fallow, despite Bush’s appearance—even that rogue exclamation point at the end of “Jeb!” couldn’t bring Colbert to make too much political commentary. I did enjoy the little digs at “The Mentalist,” one of CBS’ longer-running dramas, which kept “accidentally” infiltrating Colbert’s show. But at some point, “The Late Show” has to be more than a collection of inside jokes that refer to Colbert’s past at “The Colbert Report,” his new home at CBS, and his competition, as friendly as it appears to be, with Jimmy Fallon.

Weirdly, maybe it’ll be product placement—product placement of food that Colbert then eats on-screen, even. If that has a whiff of selling-out and/or unsustainability, well, maybe there’s a bright side. As deputy entertainment editor Anna Silman’s mom observed, Colbert’s a champion on-screen eater; he has an extraordinary ability to deliver jokes with his mouth full. It speaks to his assurance, to his facility for physical comedy, to his evident joy at playing for the waiting audience. And to his confidence that we are willing to listen, wait, and watch, as he takes a bite of something new.