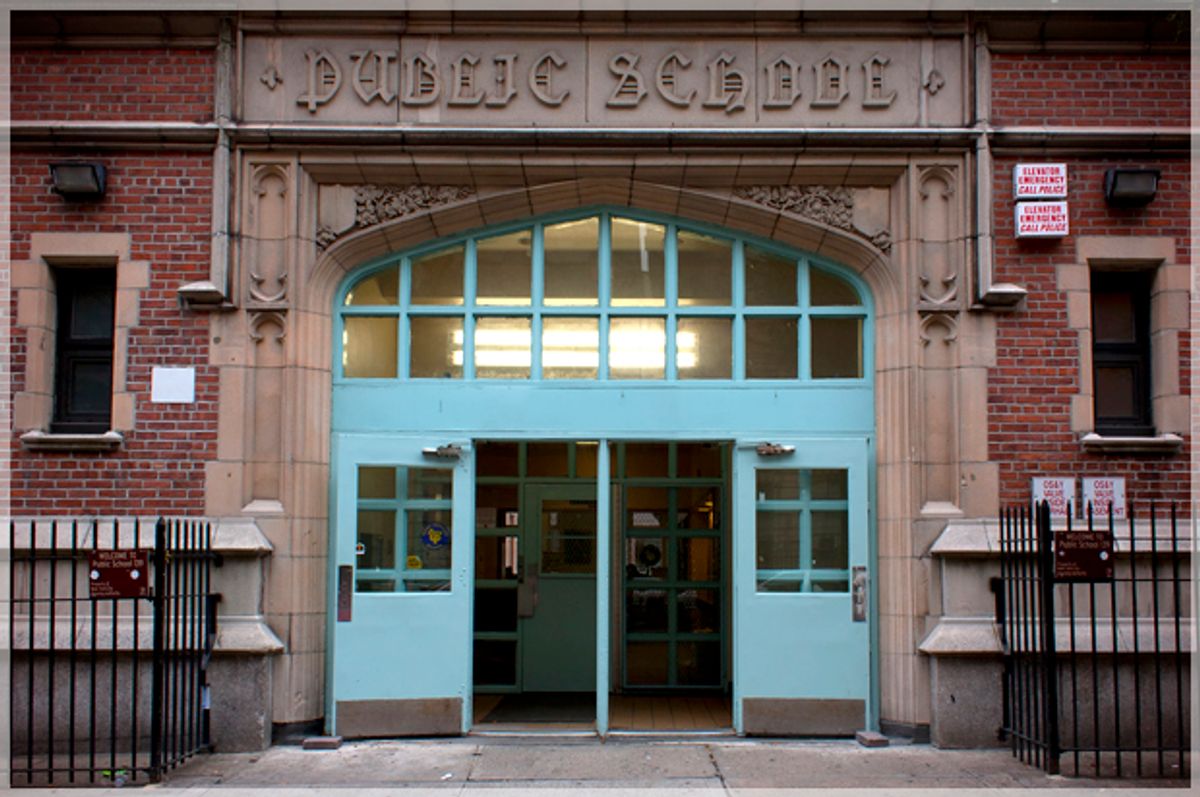 The charter school movement has been expelled from Washington state’s public education system, with a Supreme Court ruling late Friday that the privately run schools are not public schools under the state’s constitution. Meanwhile, the quick fix for that sizable hurdle sought by the state’s charter school proponents—a special legislative session—does not appear likely because Washington’s public education sector is embroiled in more controversial and larger battles.

As public schools open across Washington this week, teachers in the largest school district, Seattle, might strike for the first time in 30 years because of an unsettled contract. Other districts across Washington have been striking and settling recently. Also, since mid-August, Washington's legislature has been fined $100,000 a day by the state Supreme Court for not producing a new school-funding plan. It had been held in contempt of court for missing prior deadlines.

“It is not practical to call a special session on a whim,” said Lisa Harper, a deputy spokesman for Washington Democratic Gov. Jay Inslee, referring to the charter community’s demands. Inslee opposed the 2012 ballot initiative creating charters and their looser regulatory framework that the Court cited, ruling they were not public schools because they were run by private boards.

There are 1 million public school students who deserve a more equitable funding formula, said Harper, highlighting the state's biggest education issue. In contrast, 1,200 students have enrolled in Washington state’s charters, she said, even though charter supporters are a “vocal community.”

Charter school proponents have three options, all of them “long shots,” said Bill Keim, executive director of the Washington Association of School Administrators. The first would be asking the Supreme Court to reconsider its ruling. The parties have until September 24 to final that motion, before the court ruling becomes final.

The second option was a special legislative session. Third was asking local billionaire Bill Gates, one of the nation’s top charter school benefactors—spending at least $440 million—to write a check to keep the charters open until the legislature acts. “The downside is that would re-enforce that they are private schools,” Keim said.

For all these reasons, Washington’s charter schools face an uncertain future. That is not just because the state’s Supreme Court found they did not fit the constitutional definition of public schools, but because it also rejected the charter lobby’s top talking points: that they represent an evolution in public education, and that tax dollars should follow students regardless of their academic setting.

The ruling, written by Chief Justice Barbara Madsen, begins by saying it is “not concerned with the merits or demerits of charter schools.” However, it is difficult to separate some of these issues from the court’s analysis of whether charters can be considered public schools under the state constitution and previous court precedents where the core issue is what is a public school.

The case goes back to a 2012 statewide ballot initiative, I-1240, that allowed 40 charter schools to be created across the state. It narrowly passed, 50.7 percent to 49.3 percent, in an election with 3 million votes cast. The outcome prompted a coalition of public school supporters to sue, saying the first charters should not get public school construction funds. A lower court ruled partly in their favor, prompting both sides to appeal to the state Supreme Court. The public school advocates argued that charters operated like private schools and therefore were not entitled to taxpayer funds under the state constitution and related legal precedents. The charter proponents argued the opposite; that they wwre a new form of public school entitled to public funding.

“The [2012] Act was intended to provide parents with ‘more options’ regarding the schooling of their children,” the court’s ruling said, summarizing this history. “But the new schools came with a trade-off: the loss of local control and local accountability… Under the Act, charter schools are devoid of local control from their inception to their daily operation.” The court explained this was the case because they were not run by locally elected school boards, and were exempted from much state regulation and oversight.

“In sum, because charter schools under 1-1240 are run by an appointed board or nonprofit organization and thus are not subject to local voter control, they cannot qualify as ‘common schools’ within the meaning of article IX,” the court concluded, affirming prior legal precedents that are more than a century old.

It also rejected arguments that charters are part of an evolving public school system—one of the movement’s lobbying points. “This court has repeatedly struck down laws diverting common school funds to any other purpose,” it held. It also said the Constitution’s exclusivity provision means that charters cannot be subsidized by other taxpayer funds. “We also disagree with the State’s view that the Act’s remaining provisions are saved because funding ‘follows the student’ and in any event charter schools could be funded out of the state general fund.”

In concluding, the court slammed the charter movement’s tactic of using the ballot initiative process to create a parallel charter school system that ignores constitutional precedents. “The Charter School Act violates article IX, section 2, because charter schools are not common schools despite the Act's attempt to so designate them.”

Washington’s fight over charter schools is hardly unique. Like many locales where public school defenders face off with charter school proponents who slam public education, but want to run alternative schools with public dollars, there are many longtime activists tracking the fine print of these battles.

In Washington, activist and blogger Melissa Westbrook has long opposed charters and chaired the campaign against the 2012 ballot initiative. Writing on her blog this past Saturday, she replied to the outrage and criticism the pro-charter side expressed. “I understand the concern and sadness for students, parents and staffs at these schools but it is not like they are long-time schools closing,” she said. “They can continue on, just without state dollars.”

Here’s what the hyperventilating folks at Stand for Children Washington had to say: “We are deeply disappointed by the Washington State Supreme Court ruling public charter schools unconstitutional in our state. Whether or not the Court's decision has legal merit, there is no doubt that the result is morally wrong. It is an affront to our most vulnerable students.”

Whether or not there is legal merit? It’s a Supreme Court decision, for crying out loud. As the Court said, it had nothing to do with the merit of charter schools themselves but to the legal issues of funding them with Washington state tax dollars.

Westbrook’s reply, “Actually, their future is secure in the knowledge that, no matter what, they will always have a place at a regular public school.”

Stand for Children Washington: “The privilege of choosing a quality school for your child is one commonly exercised by those with means. This voter-approved law was designed to give that choice to the many families in Washington without alternatives.”

Westbrook: “Having choice for schooling also means following the law.”

Stand for Children Washington: “It is for this reason that in nearly every part of the state with dense populations of people of color and high poverty rates, voters heavily favored public charter schools at the ballot in 2012.”

Westbook: “Heavily favored?  An out and out lie, the measure barely passed and failed in Seattle, about 60-40%.”

Stand for Children Washington: “The Washington State Charter Law was designed to ensure the highest quality public charter schools open in our state and has been recognized by the National Alliance for Public Charter Schools as one of the best in the country.”

Westbrook: “Again, disingenuous as the issue is not about quality of charter schools. And that ‘quality law’? It's illegal under the state constitution.  As well the ‘National Alliance for Public Charter Schools’ is a Gates-funded mouthpiece org.”

Westbrook: “The Governor and the Legislature MUST support the state constitution and not heart-tugging. And ‘whatever action is necessary?’ For charter schools? Why not McCleary? [court-ordered equitable school funding plan] Why not I-1351 for class size?”

As people on both sides of this issue return to work after Labor Day and assess their legal options, the only thing that’s clear is that this fight is not over. There’s tremendous emotion on the pro-charter side—the latest blog on Stand for Children Washington’s website featured a teenager who found the Chief Justice’s home phone and left her a strong message.

At Gov. Jay Inslee’s office, spokeswoman Lisa Harper said they were getting “a lot of calls” and studying the issues, but “not rushing anything to submit [to the legislature].” The Seattle Times reported that one issue the state is looking at is the prospect of shutting down the charters, even if there is a waiting list at the newest schools.

Meanwhile, at the Washington Association of School Administrators, as executive director Bill Keim was involved in meetings to discuss what might happen next, he also wondered to what extent the pro-charter lobby brought this legal controversy to their doorstep.

“Clearly, there is a national charter school effort and my guess is they drafted language for the WA initiative very similar to what has worked in other states without fully considering the unique aspects of the WA constitution and related case law,” he wrote in a followup email. “The fact that they saw a need in their argument before the Supreme Court to ask for the 1906 Supreme Court ruling defining common schools to be vacated seems to indicate someone didn’t do their homework with the initiative. But that isn’t unique to the Charter School effort. The Court has overturned several initiatives as unconstitutional.”