Colbert and Biden, brothers in loss: Their emotional conversation about faith, tragedy and hope could only happen on the new "Late Show" 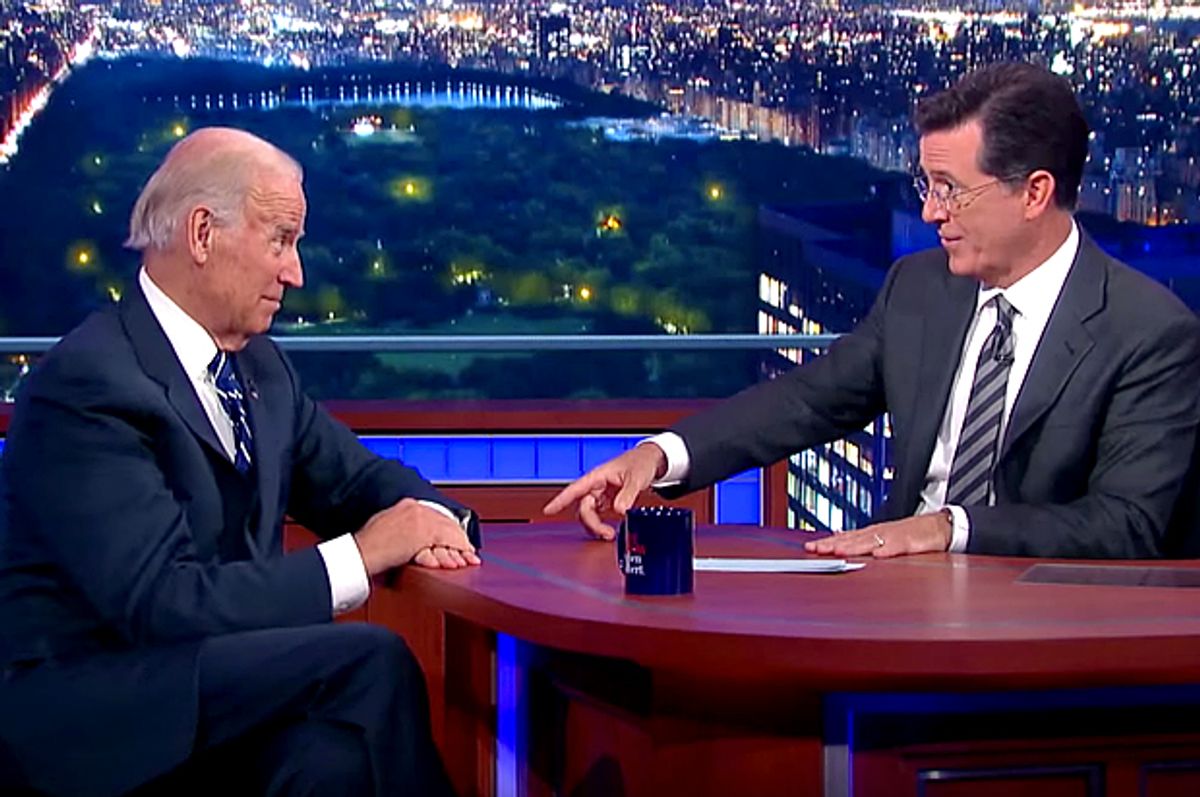 It was not what you might have expected from only the third night of Stephen Colbert's debut week as the host of "The Late Show." It certainly wasn't anything you'd imagine going on over in the realm of Jimmy Fallon, or even the occasionally serious Jimmy Kimmel. It was a conversation with Joe Biden, a conversation between two men who have faced sudden and devastating loss, about grief.

Biden's son Beau, who served in Iraq and was an attorney general of Delaware, died in May at the age of 46 of brain cancer. It was a particularly acute loss for the family — in 1972, Beau and his brother Hunter were injured in the same car accident that killed their mother and one year-old sister. On "The Late Show," Colbert offered his condolences, and asked him to share a story of his late son. Biden recalled that defining early incident, remembering, "My son was better than me in almost every way…. When he was in that accident, lost his mom and his sister, he was very badly injured, almost every bone in his body broken. He was in a cast from his ankles, both legs, his chest, his arms, I used to carry him around with a hook in his back. My other son, Hunter, his best friend, a year and a day younger, was just about three and had a severe skull fracture. You'd sit in the room in the hospital, and you’d turn and he’d say, 'Hunt, look at me. Look at me. I love you. I love you.' Four years old."

And Biden continued, saying that "Nothing changed. A couple of months before he died, I was at his house and he said, 'Dad, I know how much you love you. You've got promise me something. Promise me you're going to be all right. Because no matter what happens, Dad, I'm going to be all right.'" Colbert gently replied, "Sounds like you loved him, sir." Biden then went on to discuss his experience and understanding of faith, quoting Kierkegaard's maxim that it "sees best in the dark."

Biden has been extraordinarily candid throughout his career about his experiences of tragedy. In 2012, he gave a powerful speech for the Tragedy Assistance Program for Survivors, in which he shared, "For the first time in my life, I understood how someone could consciously decide to commit suicide. I realized someone could go out — and I probably shouldn't say this with the press here, but you're more important — I realized how someone could consciously decide to commit suicide. Not because they were deranged, not because they were nuts. Because they’d been to the top of the mountain, and they just knew in their heart they’d never get there again, that it was never going to get — never going to be that way ever again."

But he also vowed that with time, the good days begin to outnumber the bad. "There will come a day -- I promise you, and your parents as well -- when the thought of your son or daughter, or your husband or wife, brings a smile to your lips before it brings a tear to your eye. It will happen."

For Thursday's conversation, Biden could not have had a more empathetic broadcast companion than his fellow Catholic Colbert. In addition to their spiritual similarities, they both have acute experiences with death. When Colbert was ten, his father and two brothers were among the 72 passengers killed in the crash of Eastern Air Lines Flight 212. In his recent cover interview with GQ, Colbert talked of his own relationship with grief, of how his mother guided their large surviving family through the loss, and he said, "It's so…lovely. I'm very grateful to be alive, even though I know a lot of dead people…" He spoke of coming to "a very healthy reciprocal acceptance of suffering. Which does not mean being defeated by suffering. Acceptance is not defeat. Acceptance is just awareness. You gotta learn to love the bomb. Boy, did I have a bomb when I was 10. That was quite an explosion. And I learned to love it.... That might be why you don't see me as someone angry and working out my demons onstage. It's that I love the thing that I most wish had not happened."

Politicians and comedians, especially male ones, don't usually take time to engage in sincere public discourse on their emotional lives. They don't talk about heartbreak, and the profound and transforming lessons of it. Yet as Biden acknowledged Thursday to the audience, we are not alone in our tragedies. We all have them. Our culture treats grief as something to be fixed and moved on from, and the pain of others as scary and a thing to be avoided. But it doesn't have to be so. Biden said, "I marvel at the ability of people to absorb hurt and get back up, and most of them do it with an incredible sense of empathy," and cited Colbert as a stellar example. It was incredible television. It was compassion in action. Who'd have thought this is what Colbert could bring so beautifully to late night now — a lesson in loving the bomb?