"Sleeping With Other People": The edgier, funnier and truer rom-com antidote to "Trainwreck" 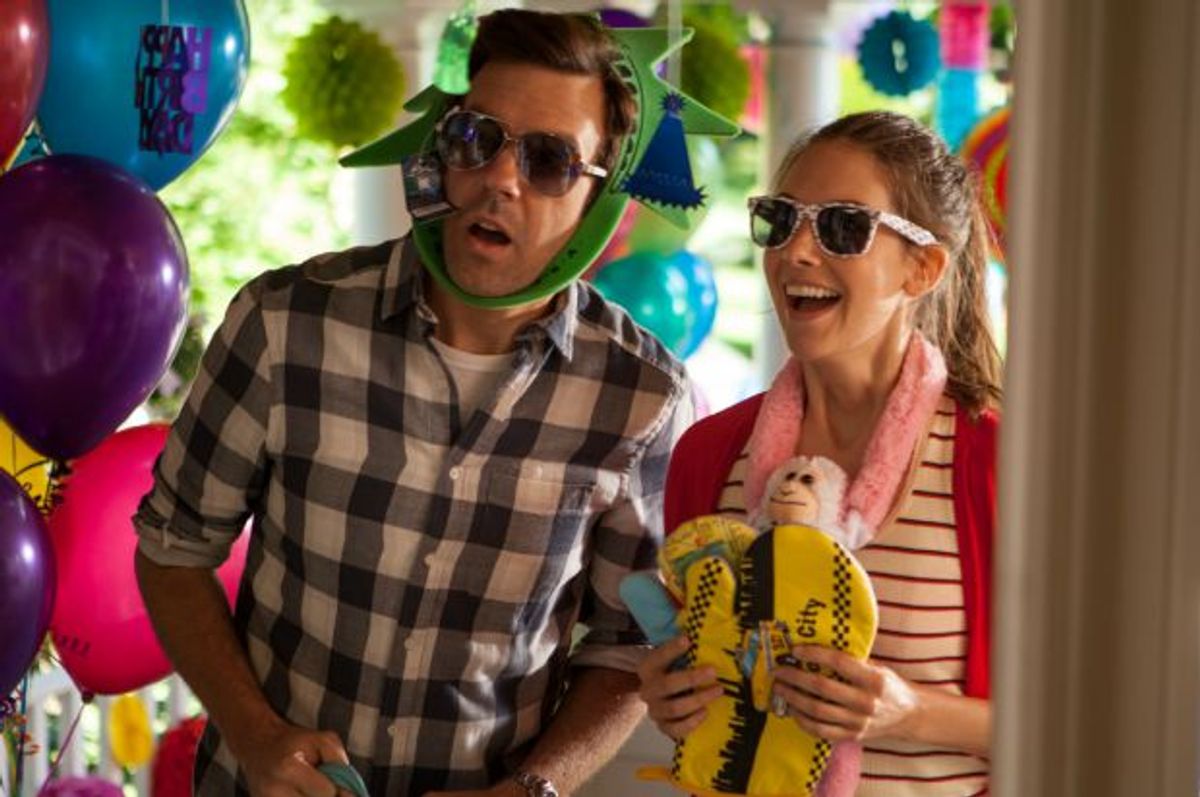 I don’t have any idea whether there’s a marketing moment available for a fast-paced, dazzlingly witty and occasionally downright filthy rom-com that updates the “When Harry Met Sally” formula – which is to say the 1930s screwball comedy formula – for the age of Tinder and Ashley Madison and “hookup culture” and a climate of compulsive or pathological sexual candor. But if there’s a reason why Leslye Headland, the writer and director of “Sleeping With Other People,” is nowhere near as famous or powerful in Hollywood as she ought to be, it may lie in not thinking all that much about marketing moments.

Don’t get me wrong: Headland wants to make expertly crafted popular entertainment, where the narrative beats, reversals of field and ultimate resolution satisfy audience expectations. Her universe is close enough to reality that we can imagine that the sparring we’re-just-friends duo played by Alison Brie and Jason Sudeikis in “Sleeping With Other People” might end up depressed or divorced or unbearably smug, but it seems a risk well worth taking. Not to launch a huge spoiler here, but if you’re guessing that boy gets girl, you’re on the right track. But Headland is also clearly making the films she wants to make. According to a quip-laden mini-profile by Tad Friend in the New Yorker this week, she has a forearm tattoo that demands, “How would Lubitsch do it?” Anyone who would ask that question in ink, on her own body, for the rest of her life is way too much of a movie geek to find unconditional success in 21st-century Hollywood.

Headland’s previous film was the memorably mean-spirited and hilarious wedding comedy “Bachelorette,” featuring Kirsten Dunst as perhaps the most noxious “pretty girl” of all time. I saw that movie amid the helium high of Sundance, where everybody loved it and thought it would be huge. But it had the same title as an endlessly trashy reality show, which was needlessly confusing, and then it got swamped in the wake of “Bridesmaids,” because there was only enough tequila at the bar for one gal-centric raunchy wedding flick, or something. “Sleeping With Other People” may be afflicted with similar strange kismet; it's an awful lot like a funnier, edgier, tighter and more true-to-life version of “Trainwreck,” except without the huge celebrity boost from Amy Schumer, the unanimously acclaimed Funniest Woman in America and generational redeemer.

I’m not dissing Schumer, who is an ingenious and often brilliant comic performer with a great gift for distorting and subverting stereotypes about female sexuality. But as a movie “Trainwreck” was a disorderly mess, and Schumer’s screenplay retreated toward conventional morality, random sketch comedy and a deeply boring Prince Charming fantasy when it arguably didn’t have to. Now, maybe Schumer made the movie she wanted to make too, and it turned out not to be all that good. But I thought I felt the Nazgûl-like breath of the studio executives and their focus-group researchers, whispering to Schumer and Judd Apatow that at this level of financial risk you can’t afford to leave the audience behind, still less lead it into the unhappy land of “unlikable” or “unrelatable” female characters.

I’m sure Headland has gotten that kind of advice too. I would agree that you have to be an evil person to enjoy “Bachelorette” as much as I did, and there can be no doubt that Dunst’s vain, spiteful and narcissistic character (although providing the canvas for one of her best performances) posed a major obstacle for some viewers. I would describe Lainey, the 30-something woman played by Alison Brie in “Sleeping With Other People,” as highly likable and relatable, if not downright adorable. But the fact that Brie and Headland pull this off so readily is an accomplishment in itself. Lainey doesn’t particularly feel bad that she has cheated repeatedly on every single one of her boyfriends by conducting a long-running secret affair with a gynecologist she has known since college (played by Adam Scott). I mean, she knows she is supposed to feel guilty and she sometimes expresses formulaic contrition and attends sex-addict meetings, while waiting eagerly for the next booty-text. Mostly Lainey feels bad that Matthew, the nerdy but orgasm-producing OB/GYN, obviously has no intention of taking her off the down-low. But she can't stop loving him, not to mention doing the nasty atop his office desk at every opportunity, because that part feels good.

I suppose the key ingredient here is that Lainey is a vulnerable romantic, albeit one who lies and cheats and treats people badly and papers it over with therapeutic doublespeak. Amid the Sorkin-like pop and sizzle of Headland’s dialogue (complete with an actual Aaron Sorkin joke) we find all kinds of sharp observations on the character of love and sex in the age of way too much information, the age when every hiccup in your personal life can be seen as a sure sign of a diagnosable disorder, and the age when technology has made sexual intimacy much easier even as it has isolated each of us in an electronic cocoon. I cannot repeat much of the outrageous monologue delivered by the guy who leads Lainey’s sex-and-love addiction circle, except that he keeps on upping the stakes and concludes with an anecdote about hacking into a supermarket’s intranet to announce that a certain commodity was available for bald individuals on a first-come, first-served basis.

We can tell right away that Jake, the slightly hapless man-child played by Sudeikis, is a hopeless romantic too, even if he’s not entirely aware that he’s kept a torch burning for Lainey ever since that one time back in college. (On an evening when Matt the future gynecologist refused to let her into his dorm room, quite likely because he was entertaining another guest.) Despite this buried longing, Jake isn’t exactly tormented either about his career as a serial womanizer. He’s exactly the guy who is cute enough and sincere enough to penetrate the defenses of the wary single ladies of New York City, and who is then willing to endure the barrage of loving, hopeful, wistful, yearning, wounded and angry texts that follow (interspersed with pictures of cats and dogs in funny costumes) when he subsequently ignores them.

We understand from the outset, of course, that Jake and Lainey are not likely to go through life as “just friends,” ribbing each other about their sexual escapades or discussing masturbation techniques with the aid of an empty juice bottle. (You cannot say that Headland is trying to conceal her moments of Nora Ephron homage. She stops just short of inserting flashing intertitles or having the characters hold up signs.) On some level Jake and Lainey know it too, which creates an immanent loop of self-awareness within the movie that even a writer of Headland’s abundant talent cannot entirely break through.

“Sleeping With Other People” has a large and generous spirit, and wants to argue that heterosexual men and women really can be friends, and that the potential sexual energy between them does not have to be resolved in the bedroom. But the romantic comedy makes certain demands, and telling any story within such an ironclad formula presents a cognitive challenge. We must be made to long for Jake and Lainey, or Harry and Sally, or Elizabeth and Mr. Darcy, to wind up together – and Headland does an exemplary job of accomplishing that. But we also must be made to believe that given two adult lives and the vicissitudes of fate it could easily have gone otherwise, even amid a narrative whose outcome is more clearly foreordained than the Book of Genesis. “Sleeping With Other People” is one of the best and funniest recent attempts to update the rom-com – but the container feels too antiquated for the world it captures, which is so furiously alive.