Stephen King goes to the White House: With his National Medal of Arts, the master of horror plants both feet firmly in the literary canon

Literary novelists and genre-benders alike find much to admire in King's work: "He shows us ourselves" 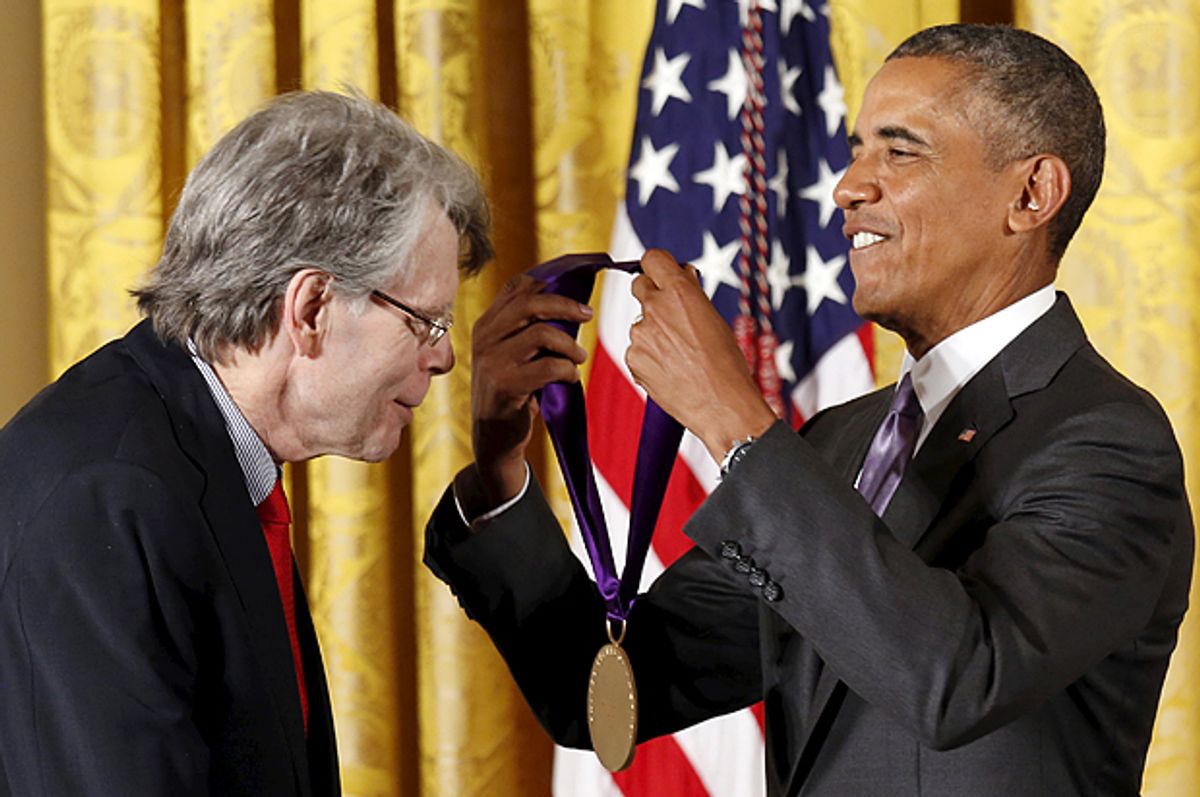 "One of the most popular and prolific writers of our time, Mr. King combines his remarkable storytelling with his sharp analysis of human nature,” President Obama read. “For decades, his works of horror, suspense, science fiction, and fantasy have terrified and delighted audiences around the world."

Clearly, then, over the last decade or so, King has broken out of what popular writers call the genre ghetto. Since the 1970s he has been a famous and bestselling horror novelist beloved by Hollywood and mostly fortunate with film adaptations. Since his lifetime achievement citation from the National Book Awards in 2003 – which saw some resistance from the literary world that is harder to imagine now – he has appeared in the New Yorker and at the New Yorker Festival, and been asked about his reading by the New York Times Book Review. He’s now a solid citizen in the literary world, which seems to satisfy King and also make the literary establishment feel populist. It’s a transition that's hard to imagine peers bestselling peers like Dean Koontz or Jackie Collins making.

But how is he viewed today by fellow writers? Given my email exchanges with about a dozen novelists in a variety of genres and generations, he either spoke to many authors in childhood or won them over later. He’s liked and admired personally for his philanthropy, for remaining down-to-earth despite enormous fame, and for being generous with other writers.

Some authors who work in the place where literary and genre fiction come together – and here I am sworn to secrecy by my correspondents – are not moved by him. They seem to have nothing against him, but seem to find his rise into the prestige leagues – and not just the bestseller lists – unconvincing.

But to a wide range of novelists, he’s not only influential but an immensely skilled writer – for his vernacular dialogue, his storytelling, his characters -- who is finally, in recent years, getting his due.

It’s no surprise that fellow horror writers admire King. “Stephen King's influence on horror/weird fiction, heck, all fiction, is immeasurable,” says horror and fantasy writer Paul Tremblay. “The scope of his vision and the humanity of his wonderfully flawed and complex characters resonates and will always resonate with readers. He truly is an American Charles Dickens.” Tremblay says his own obsession with reading – and later, with writing, came from King. “At the risk of sounding cliché or trite, his work changed my life.”

But King is also respected by writers in other genres. Aimee Bender, for instance, is a kind of literary surrealist or contemporary folkloric writer. “I especially dug his work in junior high and high school,” she says, “and I think he has a lot to teach, especially about pacing. His novels were actually too scary for me, but I loved ‘Different Seasons,’ and maybe most of all the book of stories — ‘Night Shift.’ Which reminded me so much of Roald Dahl stories, another master of idea/pacing/invention. I still remember those fingers wrapped in gauze and underneath each finger... an eye. So simply described, and indescribably creepy! I remain a fan.”

The detective-fiction author Robert Crais counts himself a major fan as well: “When I checked out of Hollywood and moved alone to a cabin high in the San Berdoo Mountains to write my first novel, ‘The Monkey's Raincoat,’ I brought along a small selection of favorite books which included ‘Salem's Lot’ and ‘The Stand,’ both of which had scared the sh*t out of me when I first read them, and both of which scared the sh*t out of me when I read them again.”

The science-fiction novelist Charles Yu, author of the lightly comic “How to Live Safely in a Science Fictional Universe,” likes King’s novels as well and sees them as having wide influence. Yu especially enjoyed King’s 2000 craft book, “On Writing.”

Many novelists working in what we’ll call the literary-realistic side of things (whether this is this a genre of its own is a question we will table for now) are also impressed with King, in some cases for unexpected reasons. “I admire Stephen King not primarily for being our foremost writer of horror and suspense—though he is that,” says Tom Perrotta, “but as an artist of colloquial English, a master storyteller whose voice is so natural and unaffected that it seems to be coming from deep in our collective unconscious, the wellspring of small-town middle America. For me, as for many other ‘literary’ writers, King’s masterpiece is ‘Different Seasons.’” (The book’s novellas led to the films “The Shawshank Redemption,” “Stand by Me” and “Apt Pupil.”) “Every one of those novellas is a great achievement.” Though Perrotta is known recently for the television adaptation of his supernaturally tinged novel “The Leftovers,” most of his books are gently satiric realism.

Similarly, Lauren Groff is a more-or-less literary novelist who draws more from history than horror, but feels King’s prose very directly. “I love Stephen King and I owe him more than I could ever express,” writes Groff, whose first book was reviewed by King and whose new novel, “Fates and Furies,” comes out next week. “I love his wild imagination and his vivid scenes, many of which populate my nightmares even decades after I last read the books they're in. But the greatest thing I gleaned most from reading Stephen King is his big-hearted glee, the way he treats writing with gratitude, the way he sees his job not as the source of anguish and pain many writers self-pityingly see it as, but rather as something he's over-the-moon delighted to be lucky enough to do. If I could steal one thing from King, and keep it close to my heart forever, it is his sense of almost-holy glee when it comes to writing.”

Generally, King seems to be regarded as someone who’s essentially a genre writer – he is not a philosophical novelist who uses genre elements, like, say, Ursula Le Guin, or a symbolist-poet-as-pulp-fictionist like Ross Macdonald – and a good one. And sometimes, an inspiring one.

“The man gets everything right,” says Crais, who has read most of King’s work and considers “Salem’s Lot” his favorite. “The way he builds tension, dread, and shocking surprises; the way he orchestrates humor with fear to draw us into a story, and makes the unbelievable seem reasonable and real.”

Crais is not the only one to point to King’s characters as his greatest strength. “I don't return to Stephen King again and again as I do for the shocks and surprises,” he says, “though he's the best in the business at this, the best to have ever been, and I enjoy the hell of how he scares the bejesus out of me.  I return for his characters. Just outlandish enough to be entertaining or frightening, but always, always real. We recognize his characters in the people we went to high school with, the parents and kids at school, our neighbors and our families. This is why ‘Salem's Lot’ blew me away, and why it was so damned effective. We cared so damn much about the people who lived in that town. Real people, just like us. He shows us ourselves.”