The right-wing media giant released his latest book last month. It's worth taking a look at what makes it so scary 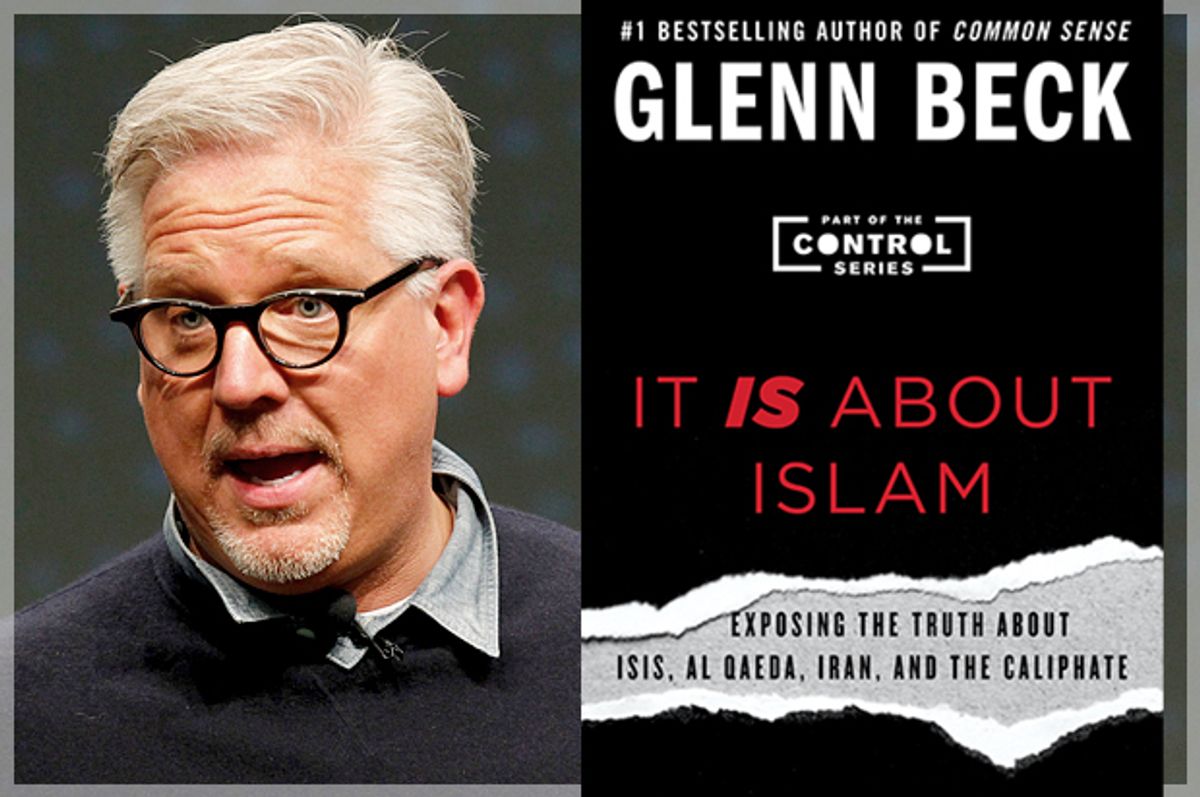 Glenn Beck would like to tell you about Islam. Sure, he’s a walking conspiracy generator who’s been wrong nearly every time he parts his lips: wrong about Obama’s SS-like “civilian national security force,” wrong about Obama’s FEMA camps, wrong about Obama using the postal service as an evil spy network, wrong about the Boston Marathon attack being a Saudi affair, and the seemingly countless breathlessly alarmist warnings over the years. But, hey, even a broken doomsday clock is right once an apocalypse, and Beck’s really done his homework on this one, a study of how Islam is going to destroy us all: "It IS About Islam: Exposing the Truth About ISIS, Al Qaeda, Iran, and the Caliphate."

Beck chooses to end the nearly 300-page book with a three-word paragraph that serves as a tidy tl;dr to reveal his position once you’ve already made the mistake of reading the whole thing. “All lives matter,” concludes the book, as if the Christian nationalism throughout needed a final splash of racism. In a nice symmetry, the final white reactionary note recalls the scene on which the book opens: Thomas Jefferson prophetically consulting the Quran before he became “the first American president to go to war with Islamic radicals” in the 1801 war with the North African Barbary states, essentially the United States’ first foreign war.

Beck shocks his readers with a revelation by the Barbary ambassador in 1786 to Jefferson and his eventual presidential predecessor, John Adams: the Islamic Barbary armies used Quranic scripture to permit the enslavement of a portion of enemies captured in battle. Africans enslaving Americans?! But that’s the wrong way around! And relying on pro-slavery scripture that isn’t the Bible? Beck, so eager to construct a narrative in which the Islamic hordes have always pounded the innocent American gates, casually overlooks the horror of the transatlantic slave trade, of which Jefferson was no small beneficiary, and the Biblical means of its defense. Instead, it’s the North Africans who are presented as Quranic savages, while the far, far worse Christian savagery in America was at that very moment unleashing two world-historical horrors: genocide and the slave trade, both reliant on the era’s white Christianist worldview. (Which isn’t to say that Christianity is to be blamed for the twin horrors, any more than 9/11 and ISIS’s crimes can be pinned on Islam, or Stalin’s mass murder can be blamed on atheism. Tyrants and terrorists will use whatever is available in the cultural milieu to justify and buttress their actions.)

The pages in between those white Christian nationalist bookends present a sprawling mess of contradictions, not unlike a religious text itself, full of intense feeling and certitude but never quite explaining everything in any sort of way that satisfies reason. Beck emphasizes the title’s verb: It is about Islam, not its errant practitioners, its misinterpretations or its crass use in the service of national power. No, Islam as a religion is the problem, asserts the book’s cover. But the pages inside find Beck hedging against that blanket condemnation of 1.3 billion believers with qualifications, which he turns right around and negates with more absolutist indictments.

“There’s a crucial distinction to be made between Islam and Islamism,” he writes in the introduction. So it’s about Islamism, not Islam? No, he returns to wholesale condemnation just two pages later: “In America we like to believe that all religions are equal. But that’s not the truth.” OK, it’s about the whole religion again. This dance continues throughout the book, with Beck trying to exculpate some Muslims before returning them all to his critical crosshairs. The same vacillation between careful, measured statements and wholesale judgment of the religion finds Beck carefully delineating sectarian divides only to smear the lines into nothing when he returns to his thesis, it’s all of Islam. He briefly touches on Iran’s enmity with ISIS, the clear sectarian antipathy and both groups’ designs on expanding their regional reach, only to fuse them together into the monster he really wants to describe: “The Islamic State and Iran are forcing the Islamic world into two camps, opposed to each other by virtue of a 1,300-year-old split but united in their embrace of radical Islamism and totalitarian, apocalyptic ideology.”

So while it may be refreshing to hear a conservative correctly assign sectarian membership to the region’s various nations, leaderships and non-state actors, the patina of scholarship and carefulness are, in the end, only window dressing on his project to make all of Islam into a bogeyman possessed only by a desire to destroy America, annihilate Israel and abolish human freedom. “Let me say it again: It is about Islam,” he writes to begin a series of 13 “lies” about Islam (e.g., “Islam is a religion of peace”) that he “debunks.” It is about Islam -- not Sunnis or Shias or Wahhabis or moderates or imams or ayatollahs or rank-and-file believers. It is about Islam, the whole thing.

The last third of the book addresses “what can be done.” This is where Beck’s reactionary, white Christian nationalist impulse can’t help but break free and reveal the previous scores of pages of close examination to be only pretense. Suddenly he reverts to the “I want my country back” fear of older white Tea Partyers, a swirling array of forces that have led America away from its greatness. “Our leaders have failed us. Our media is against us,” he writes, echoing Donald Trump. “Our Constitution is being eroded away and our culture is becoming ever more secular. Many of us have forgotten who we are as a people and a country. We’ve forgotten God.”

So much is bound up in that lamentation, delivered in right-wing code for that which has transpired since the mid-20th century. In the last couple generations, the rights and freedoms, both political and cultural, afforded racial minorities, women and LGBT Americans have changed America, to be sure. But has it been that we’ve “forgotten who we are as a people” or that we’ve thankfully remembered the American promise? White, straight, cis-gendered males have indeed lost their grip on power in America by degrees, but that does not mean that we’ve “forgotten God.” White, straight male power was (and still is) always doctrinally founded on Christianity, so to distribute power to the vaster bulk of the population is to forsake that patriarchal white god used to ordain that power structure.

It’s a two-front war for Beck, against wayward secularism at home and a sort of holy war versus Islam. What Beck describes as a reversion to strict religious rule in the Middle East can only be met with our own reversion to Christian nationalism. Beck’s television and radio shows are regularly platforms for discussion of Christian nationalism. Beck rallies behind figures like Duck Dynasty patriarch Phil Robertson, even offering Beck’s broadcasting outfit The Blaze as an outlet for the Robertson reality show when the program was temporarily canceled. Robertson joined Beck at this week’s D.C. rally against the Iran nuclear deal, delivering the same package of right-wing politics bound up in a Christianist worldview. “We are anti-perversion,” Robertson growled, launching into his rant’s Christianist coda that had nothing to do with Iran besides it sounding like a Persian cleric in 1979. Robertson continued: “We are pro-God almighty. We’re pro-gun.... They always say, ‘That ol’ Robertson guy is just too religious.’ You know what I say? I say that America ain’t religious enough!”

Beck is preoccupied throughout the book with what he presents as Islam’s cross-sectarian apocalypticism. That is what joins the Iranian clerics and ISIS, all Sunnis and Shia: the overriding desire to expedite the end of the world. What Beck leaves out is his own fascination with Christian apocalypticism, regularly inviting John Hagee, the foremost Christian End Times preacher, onto his show. Hagee’s pastoral project, much like that which Beck fearfully describes in the book, is to hasten the end of the world by supporting right-wing Israeli expansionism to accord with Biblical prophecy and bring about a great war with the Muslim world. Beck gives Hagee time on his show and uses The Blaze to deliver his “blood moon” prophecy, detailing how Israeli conquest will bring about the End Times.

All of which makes Beck’s book a little terrifying, as it shot to the top of the New York Times’ bestsellers list for nonfiction and spent its first two weeks there. Presented in the guise of Western rationalism against Islamic religiosity, the book is, in effect, a religious tract. Where Beck’s Christianism fails to meet Islamism’s fervor, the American religion of exceptionalism covers the deficit. American exceptionalism is religious in how it relies on divine providence for the one nation chosen among all the others. But we’re to believe Beck’s book to be something of an intellectual antidote to the unthinking religiosity of Muslims. Its own religiosity remains largely hidden in the mundane faith of American exceptionalism. In Beck’s religio-national faith, fear of Islam is something of a religious tenet, mirroring almost precisely what he tells us to fear in Islamic dogma: A devout American fears Islam.