The media made this f**king monster: How phony objectivity helped create Donald Trump

The old "both sides do it" lie keeps the press from talking honestly about politics, and helps empower the right 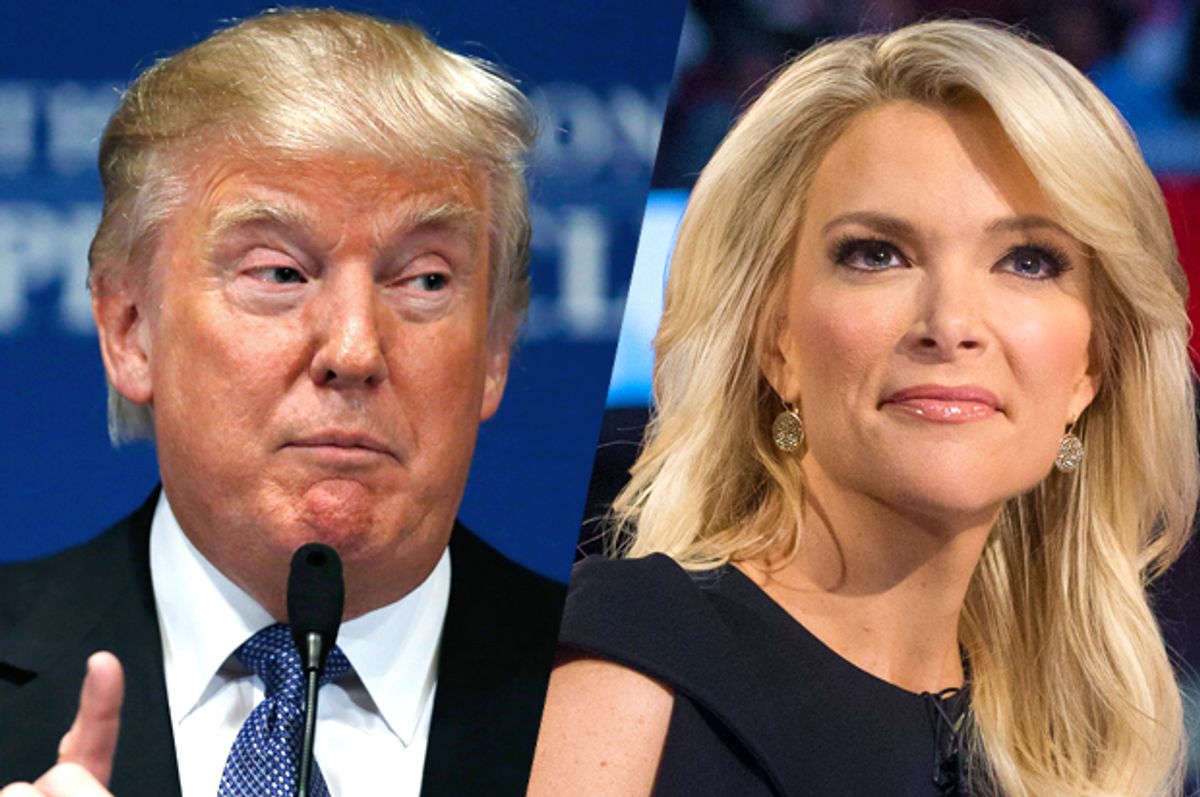 As the elite media casts about for ways to understand and explain the rise of Donald Trump, they may find outsize historical precedents (as Politico did when it asked 13 historians to name "the closest antecedent to Trump"), or cite Richard Hofstadter's “Paranoid Style” (as the New Yorker, CNN and Salon did—even while TNR's Jeet Heer warned against Hofstadter's influential misreading of populism to explain him), or simply scratch their heads in wonder. But if the media—especially the dominant elite media—really wants to know who's responsible for Trump's rise, one place they should start looking is right in their bathroom mirrors.

I know, I know. Trump is a clownish figure far removed from the sort of seriousness they strive to cultivate. Surely they can't be blamed for him, right?

Wrong. Here's why: As Congress returns, there's a looming threat of yet another government shutdown. Once unthinkable, then disastrous when Gingrich introduced them, shutdown threats have become a part of normal politics in the Obama era, thanks in large part to "balanced" journalism, which has helped to reframe them as normal, if perhaps a little bit risky—and therefore, a bit titillating. With a large part of the GOP buying into this fantasy view of how politics works, they were at first content to vent their hatred primarily on President Obama and congressional Democrats, but now their anger has widened to the entire political class—which is actually well deserved, in a way. But it's not just the GOP politicians who egged them on who are to blame—the “balanced” media played a starring role as well.

Shutdowns are not the only aspect of this story—there's the dramatic increase in the use of the filibuster, for example—but they are arguably the most extreme form that destructive obstructionism can take. They are also one of the most dramatic—and virtually unprecedented prior to the 1990s. They also involve a kind of psychological regression, back to a more immature state. After all, the essential nature of the shutdown is a refusal to engage in normal give-and-take, the sort of thing most of us learn in kindergarten, if not before. As one indication of this, pollsters even took to asking the public who was acting more adult or more like a “spoiled child.” When the whole political system gets pulled for years in the direction of government-by-temper-tantrum—and the media treats it as perfectly normal—it really should not be so surprising when an intemperate blowhard like Trump suddenly shows up to steal the show.

The “balanced” media has promoted this dysfunction around government shutdowns in at least three distinct ways: First, the media presents the shutdown shorn of historical context, with no indication of how radical, novel or one-sided it is, or of how it relates to a broader range of related radical and novel right-wing strategies, or to the dramatic underlying rightward shift of the GOP in Congress (House/Senate) since 1980. This has the effect of dramatically reducing the cost of introducing new, destabilizing and downright destructive political strategies.

Second, the media adopts a “balanced” approach to reporting on the prospects of a shutdown, and the shutdown itself. It seeks to place blame on both sides (see, for example the Media Matters research report, "What The Media's False Equivalence Misses About the Government Shutdown Threat"), regardless of how inaccurate this is. This falsely balanced reporting works in favor of the absolute worst actors—always giving them the “benefit of the doubt,” and against those who are most public-minded, adopting a stance of jaded cynicism, regardless of whether they've done anything to deserve it. Third, the media “balances” any residual negativity that the shutdown perpetrators might be left with stories intended to cast the other party—the Democrats--in an equally bad light. The media's months-long obsession over problems with the Obamacare website filled this function perfectly.

Although it began even earlier, shutdown talk began to flower immediately after the 2010 midterms, and ramped up through a series of threats, and near-shutdowns over the next two-plus years (see detailed timeline here), until Republicans finally did shut the government down for two weeks in October 2013, over a doomed attempt to defund Obamacare before it could go into effect. The public reaction was extremely negative, even though the media's “balanced” coverage strove to give Obama and the Democrats an equal amount of blame (some relevant headlines here). At the time, I wrote a story identifying "nine distinct bodies of evidence" contradicting the "both sides did it" narrative:

(1) The longstanding GOP fixation on shutting down the government.

(2) The GOP's creation of the shutdown crisis by blocking the budget reconciliation process.

(3) The emergence and evolution of the incoherent Ted Cruz/Tea Party plan to force a shutdown over 'Obamacare'.

(4) The record of prominent Republican politicians and others who repeatedly warned against forcing a government shutdown.

(5) The contrary historical record of some Republicans downplaying the severity of the shutdown.

(7) The polling evidence that only GOP base voters are opposed to political compromise—and are indifferent to crisis.

(9) The framework of American legislative history.

There were stories here and there in the press touching on all of the above, but because of the ideologically driven commitment to “balance,” they were kept isolated and atomized, never consolidated into a coherent picture of what was actually going on at the time. And for good reason: the GOP wanted a shutdown, and the public overwhelmingly did not.

Even with the intense gerrymandering that the GOP has implemented after the 2010 midterms, there was some serious talk that they could lose control of the House in the 2014 midterms as a result. But immediately after the shutdown ended, attention shifted to severe problems with the Obamacare website, and within a few weeks, the media managed to “balance” things out so thoroughly that few can even recall how badly damaged the GOP was as a result of the shutdown.

To remedy that, let's turn to a Huffington Post story, “Meet The 37 House Republicans Who Could Lose Their Jobs for Shutting Down the Government,” which offers a window onto how the nation responded that has been entirely erased from public memory. It's worth quoting at some length:

Numerous polls have shown that a majority of Americans assign a larger share of blame for the shutdown to congressional Republicans, who tried to tie government funding provisions to defunding the Affordable Care Act....

Fifty-four percent of Americans now oppose Republican control of the House, according to a CNN-ORC poll released on Monday. And a series of polls commissioned by progressive advocacy group Moveon.org and conducted by Public Policy Polling released in batches over the last several days indicate Democrats may have enough momentum to take back the House.

Democrats only need to lock up 17 additional seats in the November 2014 midterm elections to secure a House majority. The new polls show the recent government shutdown may cause as many as 37 Republicans to lose their House seats next year.

PPP pollsters surveyed 61 Republican-held congressional districts around the country from Oct. 1 through Oct. 18. They concluded that “Democrats not only have an opportunity to take back the House of Representatives next year, but that they could win a sizable majority if voter anger over the shutdown carries into 2014."

According to a PPP memo released on Monday:

Republicans will likely find this third round of surveys to be the most alarming yet, given that the new results show substantial Republican vulnerability in many districts that were not even supposed to be close. Incumbent Republicans trail generic Democrats in 15 of the 25 districts we most recently surveyed. This means generic Democrats lead in 37 of 61 districts polled since the beginning of the government shutdown.

In short, the GOP had severely damaged itself, and stood a very real chance of losing control of the House in the 2014 midterms. The shutdown strategy had proved itself to be a disaster. It should have thoroughly discredited all who had argued for it, and all the thinking that led to it. That's the clear lesson that should have been drawn. But then the “balanced” media got to work, and all the the above was swiftly negated—not just forgotten—by media's “balanced” shift of attention to the problems with the Obamacare website.

To be clear, those problems were absolutely real—but they were also clearly technical problems, rather than problems of policy or political philosophy. The political media, however, treated the GOP's government shutdown and the Obama administration's website problems as virtual mirror images of one another—an act of narrative creation that became a self-fulfilling prophecy. The short-term result of that was that it protected the GOP from suffering any consequences for the shutdown. In the 2014 midterms, this meant not only holding the House, but taking over the Senate as well.

Karma, however, is a bitch. The long-term results are now showing up in the form of the Trump campaign's dominance, and the crumbling of more “mainstream” “responsible” conservatives—not just Jeb Bush, but the entire suite of governors and ex-governors, who've averaged a total of just 27 percent in the last five polls tracked at Huffington Post, compared to 50 percent for Trump, Carson and Fiorina, the three candidates who've never held office before. If the GOP electorate has largely rejected experienced politicians in favor of these three—and Trump most of all—then a very good part of the reason is that they've repeatedly been promised success through confrontation, force of will and purity of intention, and they've been repeatedly frustrated instead.

The party itself and its various allies are partly to blame for this, of course. In the timeline linked to above, Think Progress noted:

In November of 2010, GOP leaders informally polled the incoming freshman and were surprised to discover that “all but four of them said they would vote against raising the ceiling, under any circumstances.” This response was the result of what the Washington Post described as a “natural outgrowth of a years-long effort” by GOP recruiters to build a new majority with uncompromising anti-tax, anti-spending candidates and it effectively hamstrung Republican leaders from accepting any kind of budgetary compromise from the Obama administration.

But the media is responsible as well, with its insistence on a false and misleading form of “balance,” which gave Republicans an enormous edge in the short run, but never enough to actually achieve the impossible goals they had promised their base. The “balanced” media never pointed out the disconnect —in the short run, that would have helped the Democrats, so of course we couldn't have that. So, instead, this "balanced" coverage removed all cost for the GOP's extremism: They didn't have to be for anything, they could just be against, and not suffer any consequence for the pain they caused. But, at the same time, they didn't accomplish any of the impossible things they had promised.

Which is why Donald Trump is so popular now. He benefits both from the base's unrealistically raised expectations, and from the leadership's failure to meet them. The “balanced” media deserves a good deal of credit for both.

They should be forced to take a bow.