The raging sins of the persecution industry: Unpacking the hypocrisy at the heart of the Religious Right 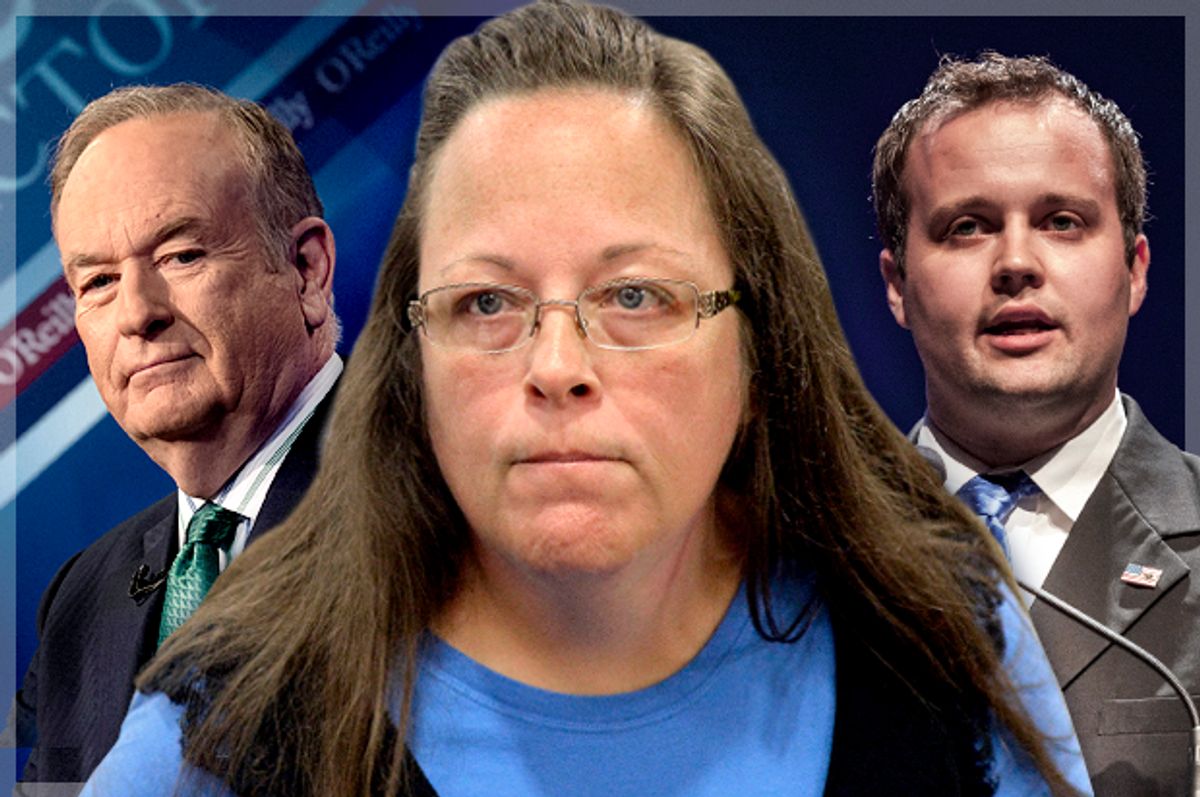 "Hypocrite, first take the plank out of your own eye, and then you will see clearly to remove the speck from your brother's eye."
— Matthew 7:5

I thought after gay marriage was legalized nationwide by the Supreme Court that we might get a well-deserved break from the “culture wars,” but oh, how wrong I’ve been. Instead, it’s open season on anyone who threatens Christian hegemony. Recently, Bill O’Reilly, the meanest, angriest and most unholy bastard who has ever made a living by screaming at strangers, claimed that “secularism” is responsible for mass murder in America. O’Reilly glosses over the fact that religious wars have dominated human history, but if you need something more current, statistics show that 7 percent of the general population self-identifies as agnostic or atheist, while less than 1 percent of the prison population identifies as such. We don’t commit crimes on the scale that religious people do.

O’Reilly’s outrageous slander underscores the two-front religious attack on democracy. On one side you have misguided “true believers,” like Kim Davis, famous for using her government position to deny gay people their right to marry. On the other you have the professional exploiter class, a long list of people that includes O’Reilly, Ted Cruz, Mike Huckabee and a parade of political and pundit rabble. What’s striking is that the loudest, most outspoken “Christian warriors” are the most flawed and perverted bunch of people collectively found outside a bordello. The entire “persecution industry” is loaded with hypocrisy.

The supporters of Kim Davis continue to ignore her own colorful life, as she proclaims herself the highest judge of morality, a final arbiter of who is entitled to public accommodation at a government office and to marry the person they love. I’m most struck not by her hypocrisy but rather by her authenticity. She wept when released from jail in a cry out to her god and her own humanity, at the same moment she denied the fundamental dignity and humanity of others. Yet, I don’t hold that against her. She’s an obvious rube, a useful and backward hick who is being exploited by others for cash and votes. As a rehabilitated rube myself, I feel sorry for her. Despite her hypocrisy and foundational ignorance, she’s far too useful to be cast aside.

As a point of contrast, look at Josh Dugger, both a true believer and a member of the exploiter class. He’s also a great example of the breathtaking hypocrisy that exemplifies American Christianity. He made a good living at the Family Research Council by shaming other people for their “sins,” while he racked up an impressive list of sexual conquests, all while dodging his own past as a child molester. If you were to write a novel about a fall from grace, you'd struggle to use Duggar’s life, because it would almost be too unbelievable. We have not seen the last of this doughy clown, and I wonder if he’ll come back a Christian or if he’ll embrace his inner freak and launch a line of Jesus-themed French Ticklers? Only time will tell.

Yet I pity Josh, just as I pity Kim. They are both pawns in a high-stakes religious long con. You can tell the players from the exploiters by the constant expression of downtrodden misery worn by the former, as they deny their own sexual natures, hide their own “sins” and decry entire groups of other human beings. They all look so pained and miserable all the time.

Like most decent people, I have no desire to call others out for their personal conduct. I don’t even believe in the concept of “sin.” We do good things and bad, but the choices we make are no one’s business but our own. Yet we can’t ignore the salivating pious who behave no better than average people (and often much worse), but who still insist on judging how the rest of us live. (Eyeballing you, Josh.. If I did believe in sin, hypocrisy would be the first one on my list.

If you think I’m taking the cheap shots, there’s a never-ending supply of easy targets to pick from. There were 400 pastors caught trolling for adulterous affairs on one web site alone, exposed by the Ashley Madison hack. I could wallpaper my house with the names of the disgraced, and that’s only from last year. This awful fiction has been going on for my entire life, from Jim and Tammy Faye Bakker, Ted Haggard, Jimmy Swaggart and too many more to list. And it is not only professional Christians. Rightwing politicians most invested in “family values” also can’t seem to resist the behavior they most decry. Mark Sanford, Todd Courser and David Vitter, are great examples, and I pick them, because they were still in office a week ago. (Courser resigned last week.)

Politicians like Mike Huckabee and Ted Cruz have not been caught. (Not yet at least.) In any case, they’re the first to jump on any manufactured Christian crisis. Those politicians who are losing to Donald Trump are exploiting the last bits of sexual gratification from the religious right in a crass attempt to prop up their flagging presidential campaigns. The only good news is that this seems like a less effective strategy every day.

Politicians are not the worst of it. The conservative media and Fox News sells daily fiction about the persecution of Christians. It’s all nonsense and one of the worst offenders is persecution-pimp Todd Starnes. No matter how small or manufactured, Starnes blames every unclaimed American fart as an attack on Jesus.

The big names at Fox often have the same kind of horrendous hypocrisy, and O’Reilly is a perfect example. While he bashes the “nihilism of secular America” with one hand, he shells out millions to settle his brazen sexual harassment with the other. No ones' hands are clean.

Atheists, like me, have said mean things about Christianity and religious people, but have also tried to engage with liberal Christians. The most reasonable Christians I know are not the voice of American Christianity. Those who love and promote a more nuanced version of the faith have a duty to get their house in order. Liberal Christians have been either ineffective or unwilling to tame the excesses in their pews.

The reason I am so troubled about this ongoing culture war is that it is a distraction. When people obsess about gay marriage, abortion and shoehorning Christianity into public schools, they don’t notice their country is being auctioned off to the highest bidder. Religious, blue collar, salt of the earth types like to blame immigrants and “Obummer” for their inability to find or keep a meaningful job, rather than the rightwing, religious politicians that shovel money upward while slicing programs that benefit the working class. Distracted, American Christians are too busy defending Christmas from some nefarious, unseen and imaginary attack to realize they’re being screwed over by their own party. Worse, is that progressives, who should be focusing on serious economic issues, get dragged along for the ride.