Devo founder fails the first rule of wedding planning: For the love of God, don't have a 9/11-themed reception 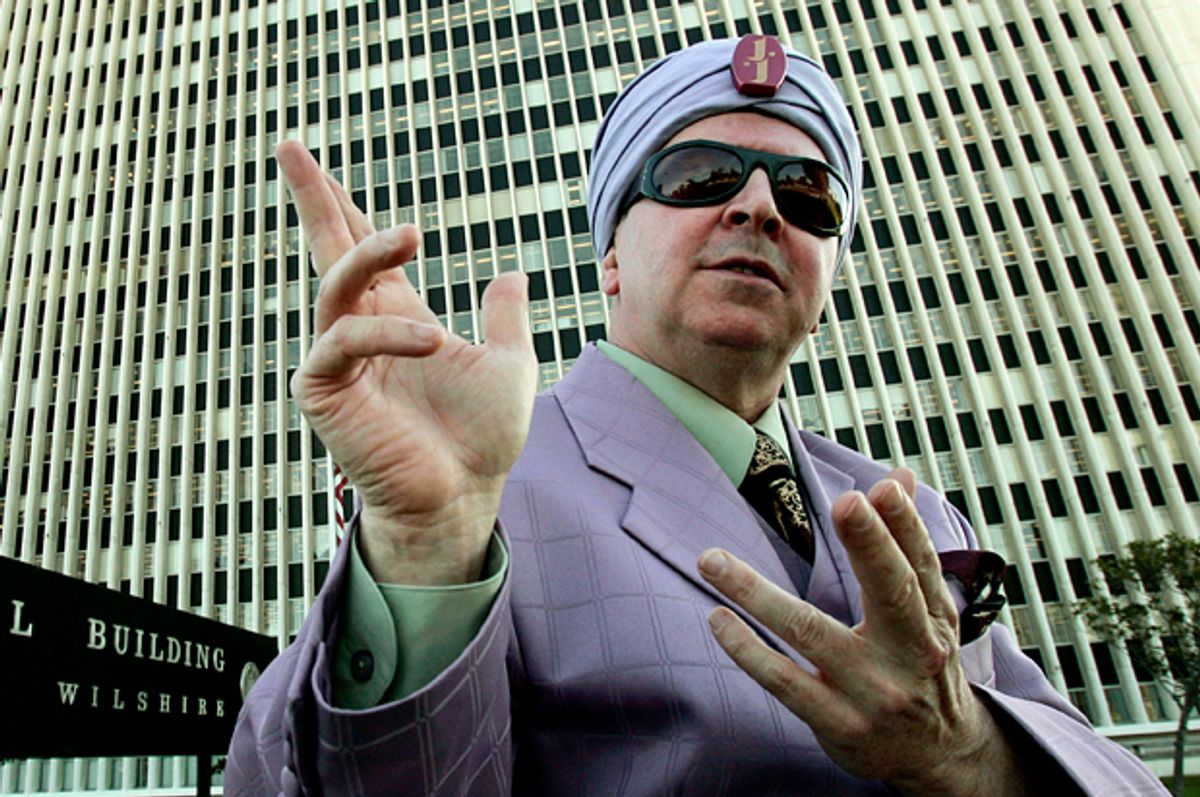 Some might say the first lapse in judgment is having a wedding on 9/11, period, but the date fell on a Friday this year, so one can understand the choice to tie the knot on what was also simply the start of a weekend in early September. But those box cutters and the Twin Towers cake? They require a little more explanation.

Jerry Casale is a bassist and founding member of Devo, as well as the brains behind a solo project called Jihad Jerry & the Evildoers.  This past weekend, the 67 year-old musician married 26-year-old Krista Napp and celebrated in a Santa Monica restaurant with a dinner reception that recalled the notorious events of fourteen years earlier — and not in a dignified "moment of silence" way.

As TMZ first revealed over the weekend, the event featured box cutter favors, place cards emblazoned with box cutter images — and a cake made to look like the World Trade Center, with the faces of Casale and Napp on the adjoining towers. TMZ said at the time that "We're told Jerry and Krista's friends weren't the least bit fazed because they both have a dark and strange sense of humor." Images from the celebration showed the couple smiling in front of their "dark and strange" wedding cake.

Understandably, once the word got out about the unique nuptial celebration, some people took offense. Michele Miller, whose brother Mitchel Wallace was killed trying to rescue others, expressed her horror to the Daily News, saying, "Shame on him, his wife, his guests, and even the restaurant for participating in such garbage. A box cutter? My brother turned to ashes as the South Tower fell on him and people died at the Pentagon because of box cutters." She added that her brother "will never get the chance to choose a wedding theme or get married. Our family just celebrated the Jewish holiday last night for the 14th year without him at the table."

But Casale says the incident was a grim misunderstanding. "One of my friends said, 'I’ll take care of the cake,'" he told the News. "That was his contribution. And it was supposed to be a surprise. Well, it was." He claims, "You don’t want to ruin the whole night by overreacting. And it was just a matter of getting out there, the servers cut the cake which everyone ate. The reaction is predictable and I apologize to everyone who would be offended because I understand."

Speaking with Billboard, Casale elaborated, saying that the couple had picked the wedding date because their marriage license was about to expire. He explained that when friends noted the anniversary, he'd quipped that he and his bride "are the Twin Towers of love." Casale said his friend thought the cake and box cutters were "some sort of transgressive sick humor, and the problem is, it's not funny."

Casale certainly also understands the horror of random violence. He was at Kent State in the midst 1970 shooting deaths of unarmed students by Ohio National Guard. Two of the victims, Jeffrey Miller and Allison Krause, were his friends. He has said the shootings "completely and utterly changed my life."

But while Casale now says that "I apologize to anyone who was offended" with his tasteless wedding theme, he seems to have not received the memo about how once you say you're sorry, you should almost always just stop talking. He added to Billboard that he and his new wife had been offline for their honeymoon over the weekend, and had been surprised by the flurry of attention their 9/11 themed celebration had received. "OK, that's bad taste," he said, "but who would have thought that somebody goes and sells shots to TMZ?" adding that his story paled to "the pure gravity of the horror out there" right now in the news. He also told Billboard that the media "ruined our wedding." How insensitive of them!

I confess I've yet to have my friends throw me a tragedy-themed celebration, so I can only speculate on how I'd react to one. I'd like to think I'd say, "Yeaaaah, is it too late to just pick a Sara Lee?" But whether he didn't want to make a scene or sincerely didn't believe there was anything to make a fuss over, it's not the media who "ruined" anything. Someone at his event sold him out — but if you don't want TMZ to run your wedding pictures, try not to be standing by a pastry baked into a mass disaster.