Lane Bryant's #PlusIsEqual campaign: Selling you empowerment, one outfit at a time

Is corporate retail advertising really the right vehicle for an "equality" movement? 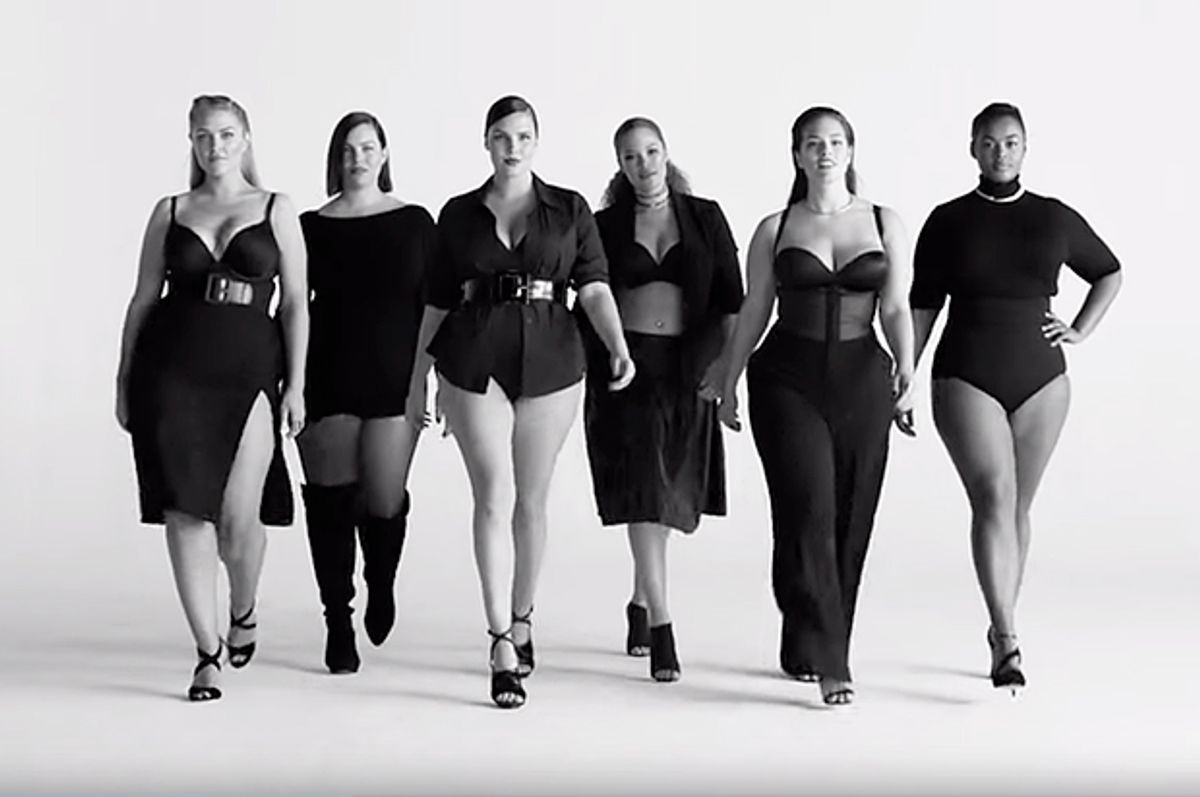 We are in a gloriously unprecedented era for body type diversity in fashion. Despite the ongoing obsession with thinspiration — evidenced this fashion week by the controversy over lanky teen model Molly Bair — the industry has made tremendous inroads just this past year alone in accepting and embracing the reality that women come in a beautiful array of shapes and sizes. But at what point does celebration cross over into just another clever way of selling "empowerment"? Because I've seen that Lane Bryant ad and I just can't tell.

The plus-size clothing retailer has over the years done a bang up job of challenging conventional fashion tropes — most recently with its dead sexy, Victoria's Secret-skewering "I'm no angel" lingerie campaign. Now it's rolling out "#PlusIsEqual," a new campaign aimed at its "proud, strong, fashion forward, stylish, super-awesome" consumers. In a 30-second spot, a phalynx of beautiful, proudly body-flaunting women strut in high heels and slow motion.

The idea that women deserve flattering, well-made clothes is one whose time has thankfully finally penetrated an industry that for too long ignored and insulted them. Last month, Melissa McCarthy launched her long-anticipated clothing line with the vow, "I don’t like the segregated plus section. You’re saying: 'You don’t get what everybody else gets. You have to go shop up by the tire section….' I said, 'Run the sizes as I make them and let friends go shopping with their friends.'"

And this spring, Target collaborated with some of the best-known plus size fashion bloggers in in the business in response to criticism that "Year after year, season after season, you put out these gorgeous designer collections and you almost never include a plus range." Plus models have been snagging lucrative contracts and magazine covers like never before this year, and it's been beautiful to see.

But Lane Bryant, possibly taking inspiration from Dove's unbelievably patronizing "real beauty" recent campaigns, has also decided to spark a movement. The retailer is asking consumers to "support our pledge" and "Get the facts" on media represtantions of plus-sized women. They've even got a special "Plus is equal" logo that looks heavily borrowed from the marriage equality one. And this week, they had a rally in Times Square, in which CEO Linda Heasley’s gave a speech calling for greater variety in fashion, noting that her company's ad was likely the only nod to body diversity in Vogue's famed September issue. Styleite approvingly reported, "There wasn’t a false note" in Heasley’s words.

But it was still also a rally for a store, right?

You can be a brand and promote healthy ideals and sincere change, both by your example and your encouragement of your target audience. I am all for that kind of conscious consumerism. But I also think it's worth noting it when a retailer cleverly deploys the language and imagery of established political activism. And as Mindy Kaling puts it, "I just sometimes get the sneaking suspicion that corporations are co-opting 'girl confidence' language to rally girls into buying body wash. Be careful."