"Shut up and sing" syndrome: Why do fans hate it when pop stars get political?

R.E.M. says no to Trump, dudes on Twitter freak out: "I loved your music but U hate conservatives like me" 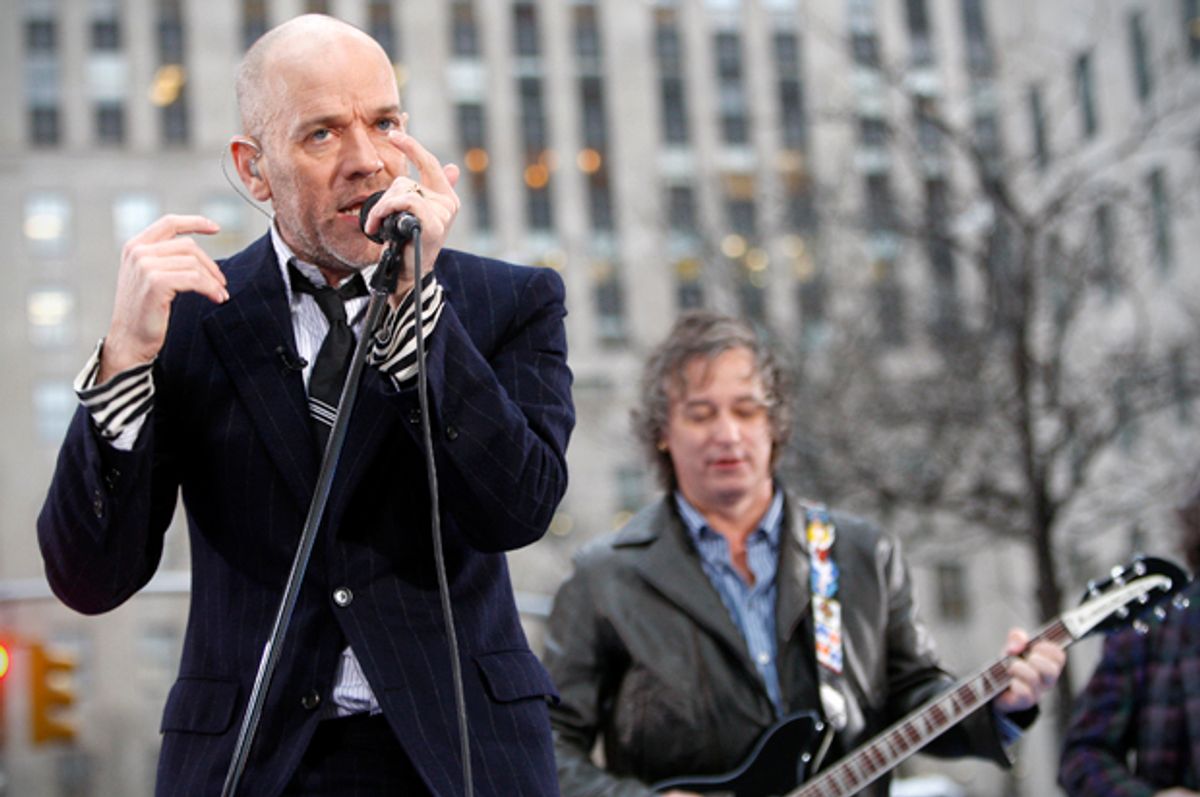 After Donald Trump used R.E.M.’s “It’s the End of the World As We Know It (And I Feel Fine)” as his intro music at an anti-Iran deal rally where Ted Cruz also spoke, the reaction was quick and swift, especially from the band. On Facebook, they posted a nuanced, detailed status asking that the presidential candidates refrain from using the song—and expressed they did “not authorize or condone the use of our music at this political event”—while noting there were more “pressing issues” to focus on than “grandstanding politicians.” Vocalist Michael Stipe’s own response, sent out via bassist Mike Mills’ Twitter feed, was more pointed: “Go fuck yourselves, the lot of you–you sad, attention grabbing, power-hungry little men. Do not use our music or my voice for your moronic charade of a campaign.”

These responses shouldn’t have been a shock: After all, the band’s had to deal with its songs being used in situations anathema to its political beliefs before, as when Fox News used “Losing My Religion” in 2012. If anything, it would be out of character for the band members to keep quiet about the Trump usage. Yet a surprising number of people seemed taken aback that R.E.M. came out with such a firm, politically charged statement. Certainly some of these responses were from those who don’t agree with the band’s liberal viewpoint, found the gesture overblown or are Trump supporters—in fact, Mills himself has spent the time since the statement engaging with Twitter trolls and challengers ("Didn't receive notice when buying #REM's products bout political restrictions @m_millsey I loved your music but U hate conservatives like me"), often with hilarious results—but plenty seemed annoyed by the vehemence of the statement.

The perplexing thing is, R.E.M.’s progressive bent and outspoken nature is an integral part of what made the band so important—and respected—in non-music circles. Yet the statement drew headlines not just because of its forceful language, but simply because such a strident stance feels like an anomaly. More and more, musicians are incredibly vocal about everything but political inclinations—and when they do endorse a candidate, it’s subtle. This hesitance to take sides can be seen as a byproduct of our outrage culture, where any pithy comment or stance can be taken out of context, blown out of proportion and evolve into a public relations disaster. For musicians concerned about being well-liked by a large number of people, it’s safer for them to stay neutral or downplay their political preferences.

But it’s also a result of increased intolerance—from both parties—toward opposing political affiliations. Politics have always been divisive, but a candidate endorsement now comes with an avalanche of vocal dissenters who want to argue for or against the decision—and don’t always want to hear what the other side has to say. Anyone with a Facebook account knows how personal political arguments can get between friends. For musicians, it’s far too easy to alienate perfect strangers (read: fans), many of whom have no interest in their entertainers getting real about politics.

The latter mind-set represents an interesting shift that’s perhaps a function of culture’s evolving relationship with musical activism. While artists such as U2, Death Cab for Cutie, Wilco, Tom Morello, Jay Z, Bruce Springsteen and John Legend remain as outspoken as ever, the widespread, cohesive activism that once permeated the mainstream—especially during the ’80s and ’90s, when everything from AIDS and environmental causes to apartheid and global famine were supported with benefit songs or albums—seems to have subsided. Sure, musicians have no trouble supporting a favorite candidate in subtler ways—performing at or hosting a fundraiser, appearing at a convention, or tweeting an endorsement—but the galvanizing gestures aren’t necessarily as overt or prevalent.

This could stem somewhat from complacency. It’s been more than a decade since the Vote For Change tour, an all-star arena tour in swing states to promote voter registration, while musical support for Obama in 2012 was decidedly muted when compared to the 2008 campaign. As John Legend told Rolling Stone in 2012, "It's probably a little less exciting to be going for the incumbent versus going for dramatic change. It's kind of not in the DNA of a rock star to be pro-incumbent. I don't think that means people are not going to vote for him in the entertainment business. It's just less sexy to talk about it." But it’s also a function of our increasingly niche-driven culture: Gathering a large enough consensus on anything is like herding cats, and so smaller, passionate subsets of people have sprung up instead to work for change on a more grassroots, local level.

This is a shift the Obama for America 2012 Campaign harnessed effectively, as Marti Adams, the campaign’s director of event communications, noted to Rolling Stone in 2012: "As we've turned our efforts to voter registration and getting out the vote, you've seen a shift away from fund-raising to grassroots events. We're leveraging these artists' popularity to convert their fans into supporters, and mobilize and activate different constituencies." But this also reflects how musical activism has changed, both in scope and premise. Everything from fundraisers to information dissemination to social movements now often happens online—thanks in part to social media’s intrinsic ability to amplify individual voices or stories—making it more of a one-to-one conversation rather than a mass media conversion. Accordingly, the most gripping musical activism focuses on things that directly affect people’s daily lives, such as women’s rights, gun control, racism and police brutality.

Unsurprisingly, that’s led to incredibly meaningful, memorable art and activism in recent years. Indie rock band Speedy Ortiz recently set up a phone hotline that fans can call if they feel unsafe at a show or experience harassment or intolerance. “If your idea of fun is making a bigoted joke at a show, like, maybe you deserve to be policed a little bit,” frontwoman Sadie Dupuis told Noisey. “I just don’t see how presenting an option to help keep people safe subtracts from fun in any way, unless your idea of fun is to oppress the other person.” Both Janelle Monáe and Prince released powerful protest songs paying tribute to victims of police brutality; the former referenced the Black Lives Matter movement on NBC’s Today Show, before (distressingly) seeming to be cut off. (A spokesperson clarified later this was not the case.) And then there was D’Angelo’s striking Saturday Night Live performance, during which he memorialized both Trayvon Martin and Eric Garner.

This idea of the personal-as-political is certainly one R.E.M. espoused: The group’s support for environmental, political and social causes made a marked difference both locally and globally, whether it was having early copies of “Out of Time” include a postcard to be sent to senators in support of the Motor Voter Bill, or helping support candidates in their hometown of Athens, Georgia. Focusing on specific issues or movements aligns with the idea that today’s musical activism is more effective when it appeals to the personal experiences of individuals. While this isn’t a new concept, it underscores that musical activism is as alive and trenchant as it’s ever been—it’s merely assumed a different, and hopefully just as effective, form.