The Cold War is back -- and it never went away: Bobby Fischer's tragedy and the conflict that ate America's soul 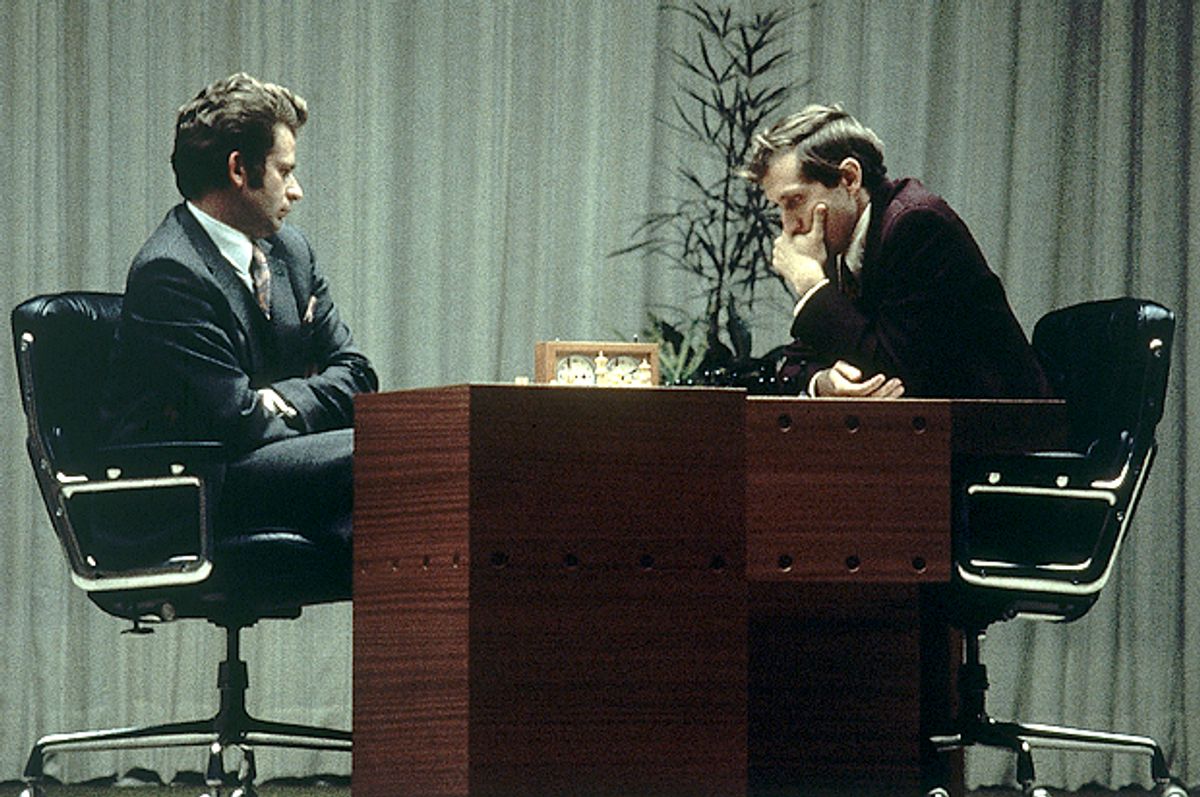 I’m not sure whether the bizarre tale of Bobby Fischer tells us more about the nature of chess, the nature of the United States of America or the twisted dynamics of the Cold War. But it is indisputable that the greatest chess player our country has ever produced – and quite likely one of the two or three best in the history of the game – was the paranoid schizophrenic son of a Jewish Communist, who wound up embracing a far-right, anti-Semitic brand of evangelical Christianity. Whether chess made Bobby Fischer crazy or whether certain kinds of mental illness are especially attuned to the complexities of the game and the intense focus it demands is not an answerable question. Both things may well be true. But this much we know: The Cold War made Fischer crazy, along with the rest of us. And if we think the disorder vanished after 1991, we’re kidding ourselves.

Fischer’s 1972 showdown with Soviet world champion Boris Spassky in Reykjavik was one of the strangest and most symbolic confrontations of the entire Cold War era, matched in jingoistic fervor only by the “Miracle on Ice” hockey game in Lake Placid eight years later. It turned a game that involved stone-faced men staring at a board for hours in silence, pursuing threads of reasoning and strategy that even those who understand the rules can barely follow, into front-page news and a centerpiece of TV broadcasting. Edward Zwick’s new film “Pawn Sacrifice” sticks admirably close to the facts of that peculiar historical moment, and features a showboat performance from Tobey Maguire as the increasingly disturbed Fischer, along with a more composed one from Liev Schreiber as the taciturn Spassky.

In its own quiet way (and arguably through its title), “Pawn Sacrifice” drops a few hints about the underlying madness and profound contradictions of the ideological confrontation that shaped America’s consciousness in a way we will likely never overcome. Simply confining ourselves to the fall of 2015, we can see many other manifestations of our circular obsession with the Cold War, even before we get to the supposed real world of global power politics. Steven Spielberg’s espionage thriller “Bridge of Spies,” based on the U-2 spy-plane incident of 1960, will be a centerpiece premiere of the New York Film Festival, before opening in mid-October. Peter Anthony’s documentary “The Man Who Saved the World” focuses on a little-known episode from 1983, when a Soviet military officer may singlehandedly have prevented a nuclear missile exchange that could have ended civilization. Netflix's new series "Narcos," about the rise of Pablo Escobar and the Medellín drug cartel, also dramatizes the U.S. government's obsession with communism in Latin America in the '80s. Stanley Nelson’s documentary “The Black Panthers” recounts the improbable tale of a small group of African-American activists who became identified as the domestic front of a worldwide Marxist revolution, and were relentlessly persecuted and crushed by the U.S. government.

It would be impossible to catalog the ever-growing mountain of revisionist or counter-revisionist Cold War scholarship and literature, but I’ll throw in a shameless plug for Salon’s founding editor, David Talbot, whose new book about Allen Dulles and the rise of the CIA, “The Devil’s Chessboard,” publishes next month. We keep cycling back to this history for all kinds of reasons: Many of us, of course, simply weren’t there, or were too young to understand or remember much of what happened. Many of us are coming to grips with the fact that the stories we were told about what happened and why it happened (or the stories we told ourselves) were not entirely true, and that too many aspects of that history have been buried or forgotten or papered over with lies. Such questions of comprehension and interpretation are far from academic, since the Cold War keeps resurfacing in subtly altered guises. Indeed, we might well ask what we mean when we say the Cold War “ended,” and whether the real enemy was ever some external force instead of our own self-inflicted bewilderment.

After 9/11, neoconservatives like Dick Cheney and Donald Rumsfeld who hypnotized themselves into believing they had won the Cold War behind Ronald Reagan gratefully seized upon fundamentalist Islam to play the role of global supervillain previously filled by the Red Menace. We need not dwell on how well that turned out, partly because it’s too depressing. (I might once have said that nothing could have made the United States look as stupid, as blundering or as evil as Vietnam. I would have been wrong.) But at first I’m sure those guys thought that was a masterstroke. As with the first Cold War cooked up by the Dulles brothers in the 1950s, the “war on terror” seemingly made it easy to divide the world into warring camps of good and evil. Either you were “with us,” like the bootlicking Tony Blair, and you signed on to the whole package of black sites and extraordinary rendition and enhanced interrogation and who knows what else, or you were a sniveling surrender monkey prepared to submit to Sharia law and hand over your wives and daughters.

If you think that incarnation of the Cold War is over just because everything about it was a total disaster and we were compelled to pull out of Iraq and Afghanistan after killing many thousands of people, bankrupting our great-grandchildren and making everything incalculably worse – well, you don’t watch Fox News, do you? Damn near every Republican presidential candidate is itching to launch a new war against ISIS – or rather, to ramp up the one we’re already waging – while affecting not to notice a number of obvious facts, such as: 1) That’s exactly what ISIS wants us to do; and 2) ISIS is a problem we created in the first place. Anyone who believes that another American-led ground war in the Middle East is the solution to that problem is either insane or suicidal or both, which is to say they still suffer from advanced symptoms of Cold War syndrome.

Then there are the unmistakable signs of a slowly heating Second Cold War between the United States and Russia, complete with proxy wars in distant countries (Syria and Ukraine, that we know about), vague but troubling saber-rattling rhetoric, competing boycotts and sanctions and a veritable avalanche of bureaucratic paperwork. It’s like hearing a hit song from 1973 all over again, and not one of the good ones, like “Crocodile Rock” or “Me and Mrs. Jones.” It’s more like a Tony Orlando and Dawn endless loop. Some months ago I attracted the ire of my friends on the Chomskyite left by suggesting that Western progressives should stop trying to cast KGB agent-turned-czar Vladimir Putin as some kind of hero in this drama, for reasons that should be way too obvious but apparently aren’t. That, too, is the legacy of Cold War psychological damage! It doesn’t have to be a zero-sum equation, and not every story has to have a good guy. As with Cold War 1.0, both sides are behaving like preening, arrogant jerks.

That brings us back around to the vicinity of Bobby Fischer, who was nothing if not a preening and arrogant jerk and who internalized the conflict of the Cold War in personally disastrous fashion. Steven Knight’s screenplay for “Pawn Sacrifice” understandably focuses more on the personalities (which are fascinating) than on the politics. But the film does refer, a bit obliquely, to the fact that as a teenage rising star in New York City’s chess scene Fischer became an object of FBI surveillance and was suspected, thanks to his Russian Jewish émigré mother, of being a Communist agent. Ultimately the CIA and the Nixon White House took a different view, after it became clear that Fischer was the only American player with any plausible shot at breaking the Soviet stranglehold on international chess.

Knight’s screenplay takes the view that Fischer suffered from delusional episodes beginning in early childhood, which is supported by considerable anecdotal and biographical evidence. But it’s difficult to avoid the conclusion that the specific contours of Fischer’s illness were shaped by context and circumstance. Well before the Spassky match he had become involved with an apocalyptic fundamentalist sect then known as the Worldwide Church of God, and fixated on right-wing conspiracy theories linking Communism, Judaism and the State of Israel. Those were unexpected directions for a Jewish kid from Brooklyn, no doubt (in later life Fischer sometimes denied his Jewish heritage), but one could argue they served as an exaggerated rejection of his mother and an exaggerated embrace of his role as intellectual champion of the free world.

Fischer repeatedly insisted that he only cared about chess and wasn’t interested in politics, but as “Pawn Sacrifice” suggests, he collaborated, after his own prickly fashion, in building the narrative behind the 1972 Spassky match: Poor kid from the New York streets pulls himself up by the bootstraps and takes down the pampered creation of the Commie empire. Perhaps it’s unfair to say that Fischer was devoured by playing that role, because he was half-devoured already, but from this distance he looks a lot like Cold War collateral damage. After his moment of rock-star celebrity Fischer descended into irredeemable mental illness; he refused to defend his title and never played high-level competitive chess again.

“Pawn Sacrifice” reminds us that it was Boris Spassky, depicted in the Western press as a brutish automaton, who found the courage to resist the overarching Cold War narrative for at least a moment. Spassky was a grinding tactician accustomed to intimidating and destroying his opponents, but he really did care more about chess than Communism. Their championship match in Reykjavik began with Fischer blundering away the first game, forfeiting the second and insisting that the third be played in a backstage room with no spectators.

Whether all that was rope-a-dope gamesmanship or Fischer’s worsening paranoia remains unclear, but it turned the tide in a match that appeared lost. By the end of Fischer’s dazzling victory a few days later in Game 6, one of the most famous in chess history, Spassky understood that he had been thoroughly outmaneuvered and outplayed. (Although the match continued for 15 more games, the outcome was never in doubt after that.) The Cold War was neither won nor lost in Reykjavik, especially since it never really ended and keeps coming back. But when Spassky rose to applaud his opponent’s mad genius, he displayed a freedom and dignity that America’s greatest chess player would never find again, and that his country was rapidly losing.