Stop calling it a "debate": CNN's GOP circus was a postmodern spectacle

The media is trying to derive something valuable from those three hours of nonsense. It's an effort in vain 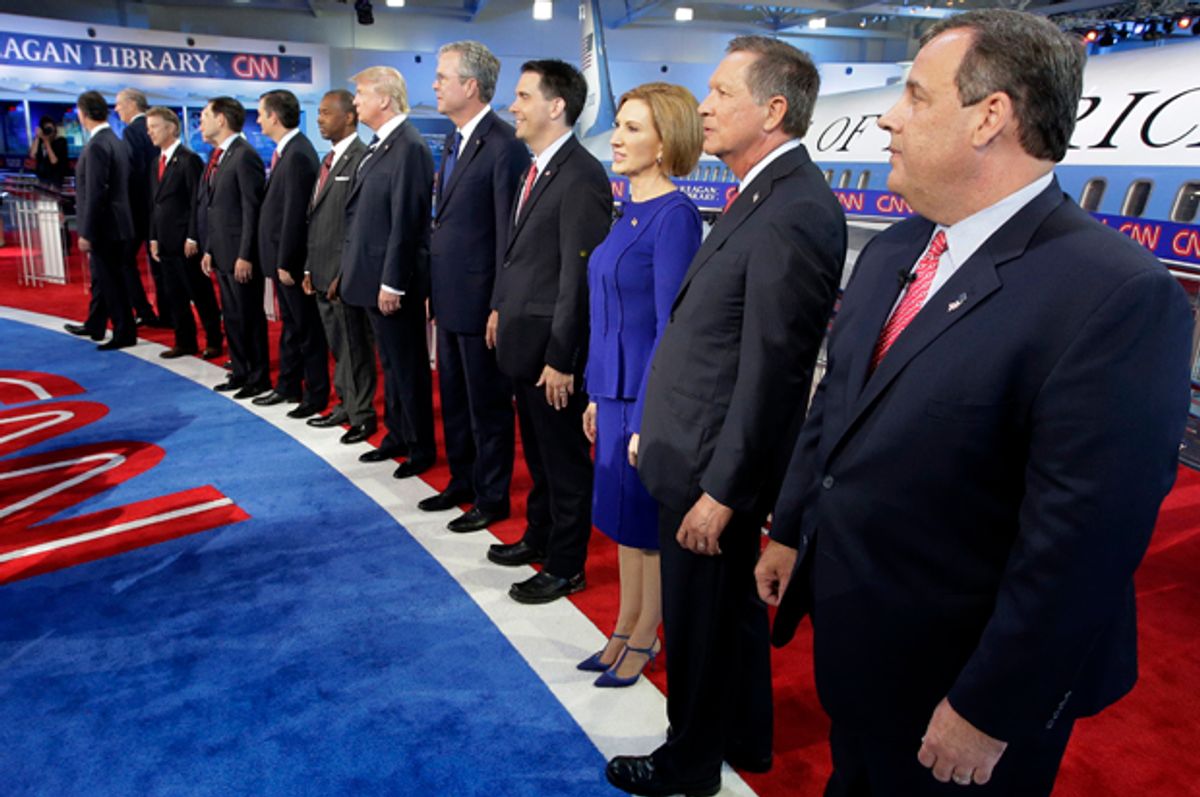 I can’t quite remember when I first came across it, but ever since I heard someone describe humans as “meaning-seeking machines,” the phrase has stuck with me. The idea that people bestow meaning to their lives — and often do so despite their suspicions to the contrary — is profound . It’s something I think about frequently, especially during those moments when the universe’s chaotic and indifferent nature seems self-evident. When “a big nothing” feels like a reasonable description of life itself.

Which brings me to the Republican Party presidential debate held Wednesday night by CNN.* A glance at the initial wave of responses suggests that many in the media are trying to tease some greater meaning out of the event. But although humanity’s search for meaning can be inspiring, it can also be desperate. And now that the interminable debate is over, and now that the spotlight has moved from the podiums to the pundits, it appears we’re about to see what meaning-seeking desperation looks like up-close.

The first spasm of groupthink focused on Carly Fiorina, the former Hewlett-Packard CEO who lobbied her way onto the debate stage after earning rave reviews for her performance in the second-tier debate held last month. After she responded to Donald Trump’s blatantly misogynist joke about her appearance with a (passive-aggressive) shot across his bow, many pundits decided that Fiorina was the big winner. Suddenly it was clear why the debate mattered; it was the moment when Fiorina felled Trump.

Frustratingly, though, somewhere along the journey from the media’s collective unconsciousness to the real world, the grand design got scrambled. An admittedly unscientific post-debate poll from the Drudge Report had her losing to Trump by more than 40 percent; and a similarly informal poll held by Time upped the difference to nearly 50. Even Fiorina’s champions admitted that she exhibited “a curious detachment from reality,” as Vox’s Ezra Klein put it, before declaring her the winner nevertheless.

But if the debate wasn’t “Carly’s Night,” like the neoconservative Weekly Standard claimed, what was it? According to the Washington Post’s Dan Balz, the debate was “unusual” because, “[f]or the first time,” Donald Trump was not a “commanding presence on the stage.” The reason this was true, Balz said, was because “he offered little substance.” All Trump said, really, was that he’d be “strong and tough” and “a negotiator par excellence.” Some other media figures agreed.

Yet this meaning-giving narrative made even less sense than the one for Fiorina. Trump was no less substantive than he was in the first debate; and there’s been essentially no indication that Trump’s supporters care if he can sound like a wonk. In fact, there’s more reason to believe that this would hurt “the Donald,” since his fans so often praise him for not speaking as if he knows what he’s talking about — or as they put it, sounding like he’s “one of us.” So the media’s “Trump stumbles” pieces would have to wait.

Perhaps most tragic of all were the policy journalists who had to find something — anything — they could write about. Vox’s Andrew Prokop was reduced to explaining why progressive taxation is not, in fact, the same as state control over the means of production. The Upshot’s Aaron Carroll, meanwhile, had  to explain for the umpteenth time that, no, vaccines won’t give your kid the plague. Wisely, Wonkblog’s Christopher Ingraham went meta instead of trying to conjure a real policy question from the debate.

All of this grasping at straws could lead you to wonder if the three-hour debate served any real purpose. For those of us without a material interest in CNN’s ratings, unfortunately, the answer is simple: It didn’t. The network is partially to blame for this, of course; nearly every question the moderators asked was designed to get the candidates squabbling on personal grounds. From top to bottom, CNN’s presentation was more akin to reality television and professional wrestling than boring stuff like self-government.

But as much as I’d like to say the pointlessness of the whole exercise was  CNN’s fault, that wouldn’t be true. Because even if CNN were interested in something a bit more high-minded, the ideological conformity of the Republican Party is so rigid, and the conservative movement’s obsession with white identity politics is so entrenched, the network wouldn’t have much to work with. The hollowing-out of democracy wrought by inequality and polarization has reduced our politics into a shell — bright, glittering, and empty.

Underneath the surface, there’s nothing; it’s as if it’s all just fodder for a new viral GIF, the latest Facebook meme. But no matter how frivolous the campaign becomes, we’ll still try to place it into some larger context. Not because we sincerely believe it, but because we’re meaning-seeking creatures. It’s who we are. We can’t be anything else.

* Technically, there were two debates; but like the vast majority of my compatriots, I’m going to ignore the “undercard” entirely.