"It is a little late, after you are both undressed, to say 'I don’t want this'": What Susan Brownmiller's old-school victim-blaming could learn from Lady Gaga's new survivor anthem

The subject of campus rape gets examined, with different results 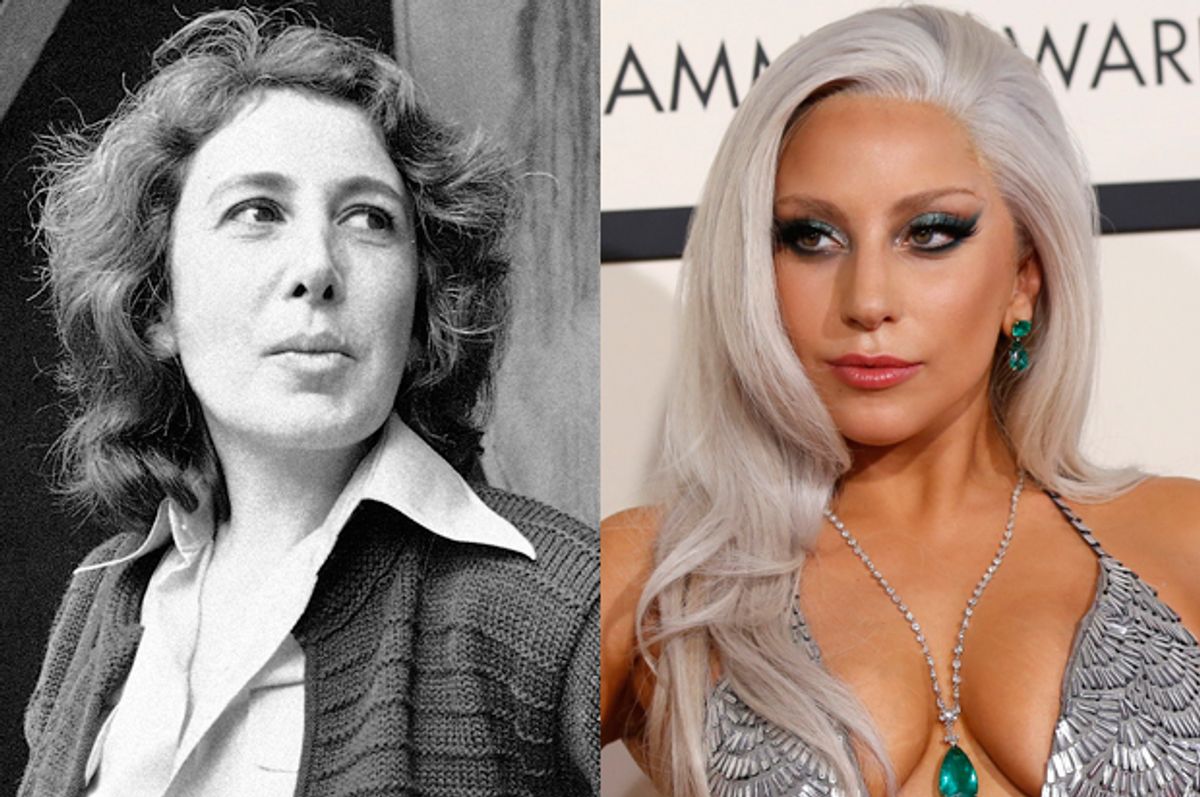 It's been a couple of days since we did this last, so clearly, its time once again to have a conversation about how to talk about rape. You ready? Let's do this. Again.

In a Thursday interview with New York Magazine's The Cut, Susan Brownmiller, who forty years ago literally wrote the book about sexual assault with her groundbreaking "Against Our Will: Men, Women and Rape," had some surprising things to say about what she calls "the problem of consent."

Brownmiller spoke astutely of the need to expand awareness beyond the much-discussed college campus problem, saying, "Also, they [college women] are not the chief targets of rapists. Young women and all women in housing projects and ghettos are still in far greater danger than college girls." And the 80 year-old author also said that "The rape kits that have not been processed are a huge problem," which is true, even though she did add that college campus activists "are not dealing with that." As "Asking for It" author Kate Harding disputes, "Heavy activist pressure doubtless contributed to the Manhattan D.A. and U.S. Justice Department's recent decision to dedicate nearly $80 million to clearing backlogs nationwide."

Brownmiller also took umbrage that "In the 1970s we had an extraordinary movement against sexual assault in this country and changed the laws…. I don't know what happened to the understanding people had in the 1970s." No one's knocking the groundbreaking work of seventies feminism, but before we get too comfortable about the "understanding" people had back then, let's remember we're still talking about an era in which many women would not have dreamed of speaking out about their sexual assaults. We're talking of a time when you could be a beloved comedian and also, allegedly, a successful serial rapist.

But where Brownmiller really went so wrong, so very wrong, was when she took a now-familiar turn into victim-blaming territory. She explained that female college students "don't accept the fact there are predators out there, and that all women have to take special precautions. They think they can drink as much as men, which is crazy because they can't drink as much as men. I find the position 'Don't blame us, we're survivors' to be appalling…. People think they can have it all ways. The slut marches bothered me, too, when they said you can wear whatever you want. Well sure, but you look like a hooker. They say, 'That doesn't matter,' but it matters to the man who wants to rape. It's unrealistic."

She added, "I take a hard line with victims of domestic violence, too. I feel it is my place as a feminist to say, 'Get out, get out, get out of this relationship'…And my feeling about young women trapped in sex situations that they don’t want is: 'Didn’t you see the warning signs? Who do you expect to do your fighting for you?' It is a little late, after you are both undressed, to say 'I don’t want this.'"

And when interviewer Katie Van Syckle replied, "I guess the hope is that young men would respect that," Brownmiller answered, "That would be nice. There is not much attention on them is there?" I've got to say, coming so soon on the heels of Chrissie Hynde's similar August comments that "If you don’t want to entice a rapist, don’t wear high heels so you can’t run from him," it's been a pretty grim month for reassessing our feminist heroes.

You can urge people to take reasonable cautions to protect themselves from assault. But — I swear to God — you can do it in a way that doesn't shift the bulk of the conversation to telling women what they're doing wrong, or ignoring the complicated and compelling reasons they might remain in abusive situations. Because I've got to say, you know whose choices and actions I have a bigger problem with than girls who get drunk or wear short skirts? It's rapists and abusers. Ostensibly legitimate publications are still, right now, declaring that it's not really rape if you put a gun to a woman's head and sexually assault her, as long as she's a sex worker. Brownmiller's and Hynde's notions that people who are raped are complicit in their rapes, and that it is the responsibility of women to police the urges of criminals, are persistent, and ugly, and wrong.

A lot has changed in the four decades since Brownmiller sparked a national dialogue about rape, and as demoralizing as the current climate unquestionably remains, there has been tremendous progress nonetheless in how sexual assault is addressed and how survivors are supported. In "Against Our Will," Brownmiller wrote that "Man's structural capacity to rape and woman's corresponding structural vulnerability are as basic to the physiology of both our sexes as the primal act of sex itself. Had it not been for this accident of biology, an accommodation requiring the locking together of two separate parts, penis into vagina, there would be neither copulation nor rape as we know it." Brownmiller, writing in her era, wrote in its vernacular.

Fortunately, we acknowledge now that rape is not confined to act of a penis forcing itself into a vagina. Fortunately, visibility continues to increase. On Thursday, the same day Brownmiller was asking, "Who do you expect to do your fighting for you?" Lady Gaga debuted an intense and powerful new video for "Til It Happens to You," the song she and Diane Warren wrote for the documentary "The Hunting Ground." A portion of the video's proceeds are to be donated to sexual assault survivor organizations. The clip features three scenarios of college sexual assault, including one involving what appears to be a transgender victim, as they move from trauma to support and healing. While it's unfortunate it uses the controversial one-in-five statistic, the clip is nonetheless stunning. It shows the pain and violence of sexual assault, and it does it without telling anyone it's their fault if it happens to them. And while Susan Brownmiller helped get America talking about rape, it's a dialogue that can't stay stuck in the past.