"It’s not racist, I can tell you that right now": Confederate flag's meaning a total mystery to teens fighting to fly it 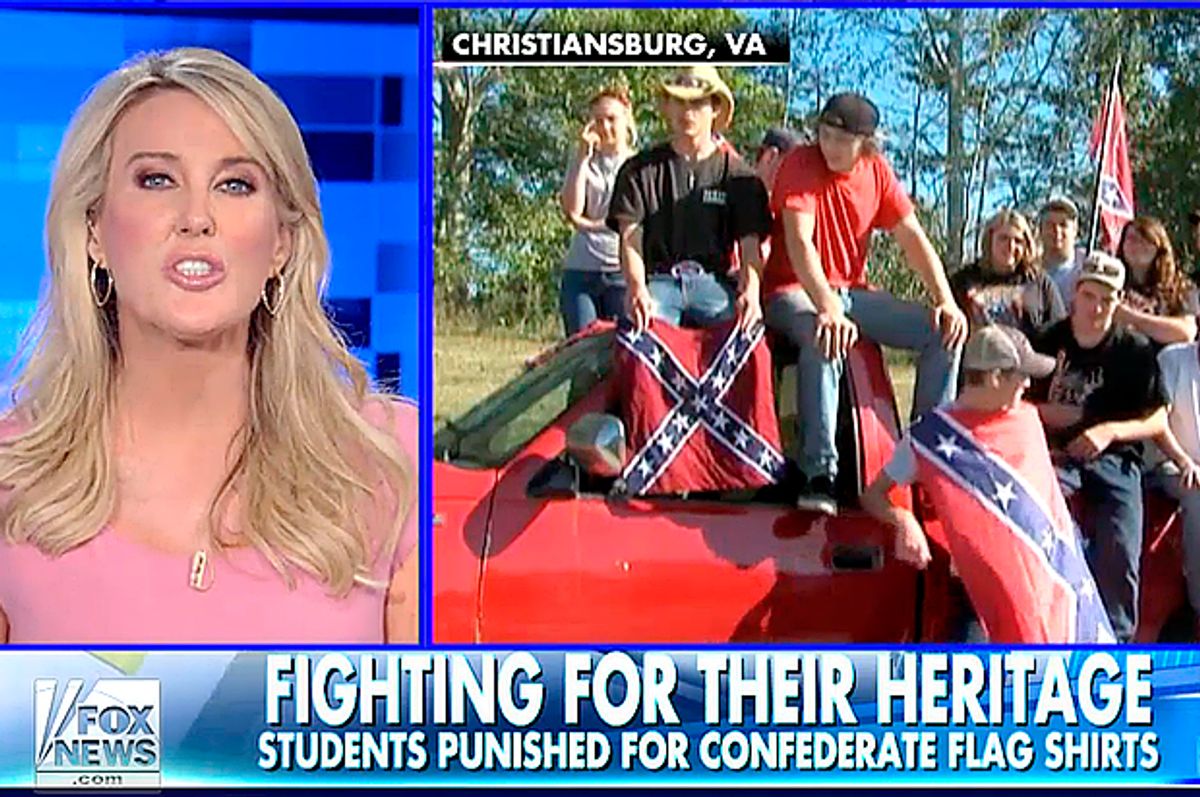 And they say kids these days are too apathetic. They say they aren't willing to take a stand. Well, I guess the students of Virginia's Christiansburg High School have proved that wrong. This week more than two dozen students boldly defied their school dress code in protest of the policy, and most earned suspensions for it. Such passion. Such integrit… oh wait. This was about the right to display their Confederate flag gear. Never mind.

Montgomery County Public Schools Spokeswoman Brenda Drake told a local NBC News affiliate that the school originally banned students from wearing the symbol after "a year's worth of fights that occurred from 2001 to 2002." Drake said, "The fights were racially charged and racially motivated, and the Confederate flag was used as a symbol of intimidation in that specific case." She added that "smaller" incidents persisted for years and that "Continued racial friction suggests that lifting the ban of this particular symbol would cause significant disruption at the school."

So this year, the school also implemented a ban on Confederate flags or "decals with the Confederate iconography" from student cars. Students who wish to park in the school parking lot are now required to sign a written agreement they won't display the flag.

Oh no, but FREEDOM! How can this horrible suppression be happening in AMERICA? As Fox reports, "Their First Amendment rights were violated."

"They're trying to get rid of it, and they're not trying to get rid of any other flags," student Forrest Taylor told NBC affiliate WSLS. "They say that it's a racist thing even though it's not." Classmate Hannah Smith agreed, saying, "It’s not racist, I can tell you that right now. My brother left this world a few months ago, and he told me it doesn’t matter what people say, keep that flag flying for me." Students vow they will keep wearing the symbol "for the foreseeable future."

Christiansburg High wasn't the only site of a dispute over the flag this week either — in Jacksonville, Baldwin Middle and Senior High School found itself embroiled in a similar dispute after school officials told student John Moncrief to remove the flag from his truck. News 4 Jax reports that "more students came back the next day with more flags to show support." Student John Hargrove told reporter Jim Piggott that he was likewise told to remove his flag, and that "I mean, it kind of offended me because that's my heritage. I support the South. I don't see why that's a problem." Oh God, stopppppp.

Anecdotally, all of the students interviewed on camera are white.

High school students who love their Confederate flags, who feel "offended" about some imagined insult to their "heritage," may I make a suggestion? It's called Google. Maybe you could read about Dylann Roof, the confessed killer of nine African American church-goers in Charleston earlier this year, and his fondness for the flag. Maybe you could read Tom McKay's fine Mic piece of June, in which he explained the ideology of the flag's designer, William Thompson, who believed it would "be hailed by the civilized world as THE WHITE MAN'S FLAG."

Or do an image search with the terms "Confederate flag KKK." It's extensive. I hope maybe then you'll reconsider the "It's not racist" argument. Because it totally is.

You can have pride in where you come from without perpetuating symbolism that is threatening and hateful. And these kids should know that. They should be learning that, and if they're not, that's a problem. It's not sufficient for their schools to ban the Confederate flag, or to suspend those students who still flaunt it. They have to teach them why.