Wal-Mart made news recently when it announced it was boosting the wages of workers. Too little, too late 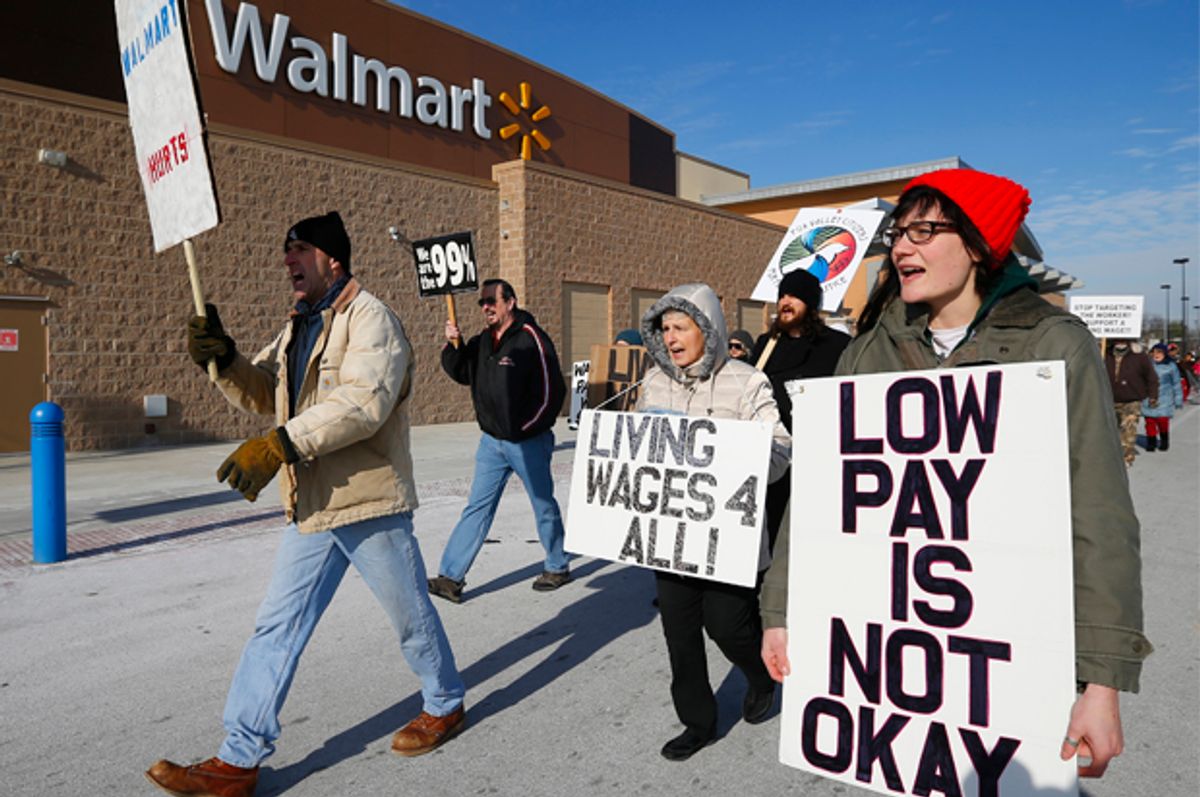 Wal-Mart recently made headlines for increasing the starting salary of workers from $9 to $10 an hour, which would boost the wages of 500,000 employees, along with other boosts in specialized sections. While this step is a positive one, a new Demos brief argues that despite this new policy, Wal-Mart wages and schedules still aren’t livable. Demos finds that the new $10 an hour wage “still does not provide enough income to support the basic needs of a single adult working Walmart’s full-time schedule of 34 hours per week in any state in the country.”

To determine the impact of Wal-Mart’s wage increase, Demos used the Living Wage Calculator, developed by Professor Amy K. Glasmeier of the Massachusetts Institute of Technology, to examine whether the wage would constitute a living wage across the United States. Demos ran a few different calculations. Demos examined three family types: single adult, one adult and one child, and two adults (both working) with two children. Demos also examined three schedules: a full 40-hour week, a 34-hour week (the standard at Wal-Mart) and a 20-hour week. It’s also important to note that this wage still won’t affect all Wal-Mart workers -- only those who have completed a six-month training program. That means many workers will not benefit from the policy.

Demos finds that for workers who are working the Wal-Mart standard of 34 hours, there are no states where $10 an hour is a living wage. Even in low-cost states such as Nebraska, Oklahoma, Ohio, South Dakota and Wal-Mart’s home state of Arkansas, this wage provides only about 90 percent of what a single employee needs for a basic standard of living. In the median state, it provides just 81 percent of the income needed to support a single adult. If a worker managed to get 40 hours, they would be making a living wage in 17 states.

Yet a single adult working full time doesn’t accurately convey reality for many Wal-Mart workers. In a recent earnings call, Wal-Mart disclosed that approximately half of its U.S. workforce is employed part time. OUR Walmart, a worker’s group, has called for more hours, because many of the workers who are working part time are doing so involuntarily. On a schedule of 20 hours a week, a $10 an hour wage is equivalent to only $10,400 a year – less than half of the income needed to afford a basic standard of living for a single adult in 33 states. Many Wal-Mart workers also have children, yet in the median U.S. state, a Wal-Mart worker paid $10 an hour and working the company’s full-time schedule of 34 hours a week would earn just 39 percent of the income needed to support an adult with a single child. Working families will also struggle at $10 an hour. A family of four with two working adults who managed to work 80 hours combined would make $41,600 a year before taxes, only 68% of a living wage in the median state. If they worked the Wal-Mart standard of 34 hours each, they would make only 58% of the living wage in the median state. Many people argue that paying a living wage would force Wal-Mart and other retailers out of business. But the mythology that higher wages would destroy companies is exactly that: a myth. Zeeshan Aleem recently reported for Mic about Moo Cluck Moo, a company that raised its wage to $15 an hour. Rather than going under, “They're turning a profit and expect to open up new locations as early as next year.” Studies suggest that minimum wage increases don’t have massive impacts on employment. In a major 2013 survey of the research, economist John Schmitt explained why companies see “reductions in labor turnover; improvements in organizational efficiency; reductions in wages of higher earners” rather than cutting jobs.

Though minimum wage increases aren’t entirely comparable to a company like Wal-Mart raising wages (though Wal-Mart’s position as the largest employer in the United States certainly makes it unique), the literature suggests similar factors are at work. The Demos brief discusses the fact that a growing literature on human capital management in retail finds that experienced employees with broad knowledge of the company are better equipped to serve customers, leading to higher sales numbers and better performance overall.

If Wal-Mart was able to reduce its turnover rate, currently 44%, then it could save the cost, often 1.5 to 2.5 times a worker’s annual salary (for a skilled or semi-skilled position) of replacing her. Costco, which follows a higher-wage model (hourly workers make an average of $20.89 an hour, almost double Walmart’s $11.83), has a turnover rate of just 17%. One study suggests that, “On average, revenue increased by $10 for every additional dollar of payroll added to a store, and for some stores that were particularly understaffed, the revenue lift was as high as $28.” Higher wages then, may well pay for themselves.

These data highlight the importance of organizations like OUR Walmart, which has already succeeded in getting raises for 500,000 workers, $1 billion invested into pay raises and new policies surrounding pregnancy and leave. They re-launched on Thursday, now aiming for a $15 an hour wage and full hours for all associates. A $15 an hour wage would translate to an $8,840 a year raise for a worker at 34 hours (and a $10,400 a year raise for a worker at 40 hours). But while $15 seems high, it’s worth noting that Wal-Mart has spent tens of billions buying back its own stock in recent years and its profits last year exceed $16 billion. The Walton family, who own large shares of Wal-Mart stock, were recently estimated to be worth around $145 billion. Josh Bivens of the Economic Policy Institute estimates that their net worth exceeds that of 1.7 million families earning the median income, combined.

Wal-Mart’s high profile as America’s largest employer makes its wage decisions particularly important -- in many ways it sets the pace for the rest of the economy. Today, Wal-Mart has a singular opportunity to lead on the improvement of wages and schedules, setting a higher floor for workers who deserve better. As a previous Demos report put it, “large retailers can embrace the opportunity to make a positive change in the economy and the nation.” That choice remains.

Amy Traub is a senior policy analyst at Demos.

Amy Traub is a Senior Policy Analyst at Demos.