The best places to live in America: How college towns perfected the city

They're high-tech magnets with street life, culture and lots of energy. No wonder the new "college city" is so hot 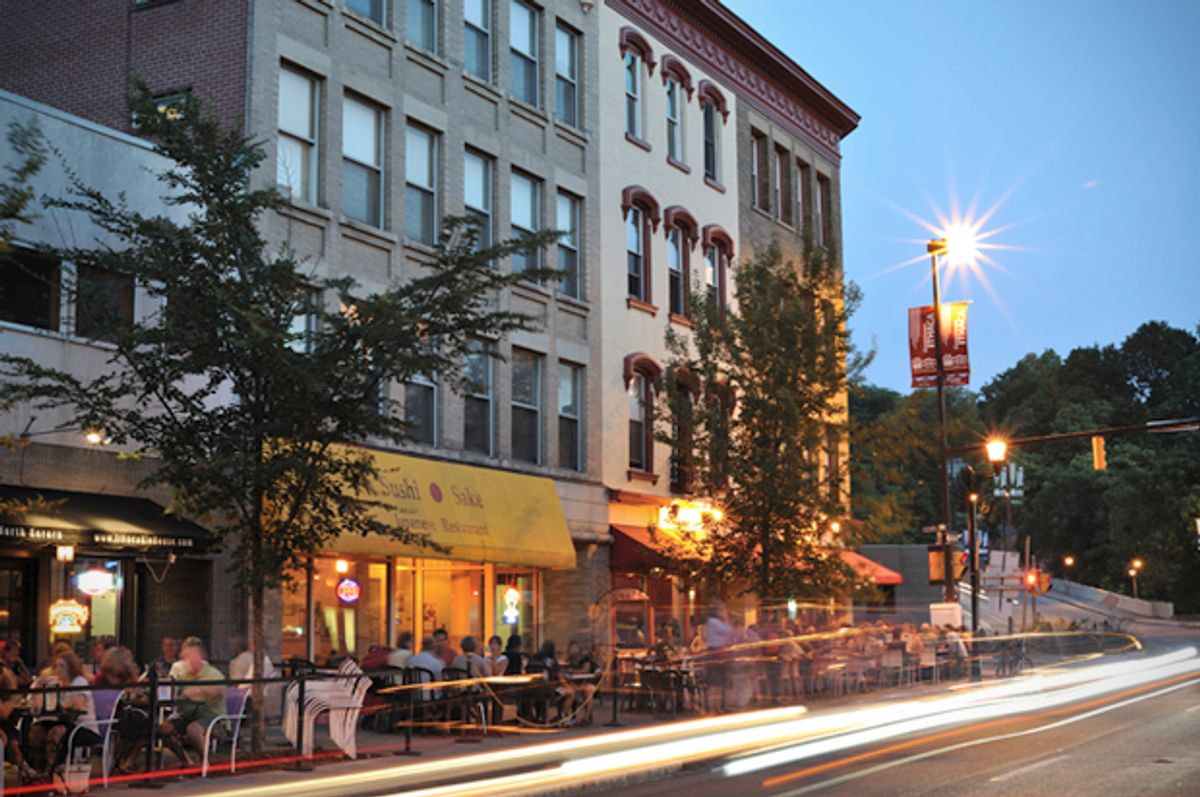 Excerpted from "Mysteries of the Mall"

Places Rated Almanac bills itself as a “guide to finding the best places to live.” It compares and ranks all 343 metropolitan areas in the United States and Canada, taking into account cost of living, job opportunities, transportation, housing, recreation, climate and so on. The metropolitan areas surrounding large, vibrant cities like Seattle, San Francisco and Toronto are highly ranked: after all, these places tend to boast a variety of employment, entertainment and recreational opportunities; they also offer a wide choice of health-care facilities and are usually important transportation hubs. It’s a surprise, then, to discover that the fifth-rated place to live in the United States is Raleigh-Durham in North Carolina. This is a metropolitan area whose largest city, Raleigh, has only about 230,000 people; Durham is even smaller, with fewer than 150,000. Yet little Raleigh-Durham is hot: in 1992, Inc. magazine rated it as one of “the best places in the country to own a business,” and last year Money magazine gave it the coveted No. 1 spot in its “best places to live in America” issue.

The runners-up to Raleigh-Durham as Money’s best places to live were Rochester, Minnesota, and Provo-Orem, Utah. Likewise small-to-midsize regional centers that share several characteristics other than their size, they score high in that ephemeral but crucial category, “quality of life.” They are near recreational amenities like lakes and mountains. They have strong local economies and have lower unemployment, poverty and crime rates than the national average. But Raleigh-Durham, Rochester and Provo-Orem are not merely examples of successful small cities. They are also examples of a new urban trend: the rise of what might be called the college city.

The college town is an American institution. Throughout the nineteenth century, it was common practice to locate private colleges in small towns like Amherst in Massachusetts, Middlebury in Vermont, and Pomona in California. The idea was that bucolic surroundings would provide the appropriate atmosphere for the pursuit of learning and (not incidentally) remove students from the distractions and temptations of the big city. The influence of the small college on its town was minimal, however, beyond providing a few local residents with service jobs.

The college city is different. At its heart is a large research university. In the case of Raleigh-Durham, there are actually three: Duke in Durham, North Carolina State in Raleigh, and the University of North Carolina at Chapel Hill, just down the road. Provo has Brigham Young University, and Rochester has the Mayo Clinic, which also runs a graduate school. Not only are modern research universities vast undertakings—the three North Carolina universities have about 60,000 students among them—but they also act as magnets for private enterprise, attracting industries that provide well-paying jobs in the high-tech and medical fields. For example, the 6,800-acre Research Triangle Park outside Raleigh is now home to more than 80 research enterprises that employ about 35,000 people.

It’s not just jobs that lure people to these places. Simply put, life in most smaller cities is cheaper. A family moving from the metropolitan area of a large city like Philadelphia, say, to Raleigh-Durham would need considerably less income—about 30 percent less—to maintain the same standard of living. The savings come chiefly in the form of lower housing prices and property taxes as well as lower state and local taxes.

In the past, a lower cost of living usually translated into a lower standard of living. Life in small cities, with or without colleges, might have been cheaper, but it was also restricted in terms of entertainment, shopping and recreation. Today, DVDs, sports channels, cineplexes, clothing and housewares catalogs, national distribution chains and the Internet have changed that. You don’t have to travel to Manhattan anymore to shop at Bloomingdale’s; all you need to do is go down to the mall or call an 800 number. This is more than merely a matter of convenience. It means that small cities can offer many, if not all, of the everyday services and amenities that used to be the exclusive province of the metropolis.

Where people live has always been influenced by technology. Once, the seaport, the railroad and the huge factory complex encouraged concentration in large cities. Truck transport and the automobile have had the opposite effect; so has the deregulation of airplane travel and telecommunications. Generally speaking, recent technological developments like cellular telephones, cable television, personal computers and fax machines have all supported dispersal. Indeed, it is difficult to think of a single invention in the past 50 years that has not been inspired by the desire to make modern life more decentralized.

The forces of decentralization account for much of the appeal of the college city. For example, the largest American cities—New York, Philadelphia, Chicago, Boston—have traditionally had the most sophisticated hospitals. The decentralization of medical skills now means that a regional medical center, like the Duke University Medical Center or the Mayo Clinic, can provide world-class health care. Another appeal of a college city is the access to continuing education, not only for people in mid-career, but also for retirees. Mild climates and golf courses used to be the main attractions in retirement communities, but college cities, with their high-quality athletic programs, their university drama and music departments, and their art galleries and museums, offer a variety of diversions not available in most cities of comparable size. Life in a college city, whether it is Raleigh-Durham, Santa Cruz, California, or Charlottesville, Virginia, can be as cosmopolitan as it is in larger cities. The list of such college cities is long and growing longer: Madison, Wisconsin; Ann Arbor, Michigan; San Luis Obispo, California; Eugene, Oregon; Austin, Texas; Bloomington, Indiana; Boulder, Colorado; Iowa City, Iowa; and Lawrence, Kansas, are some examples.

The college city I know best is Burlington, Vermont. This little city is in the foothills of the Green Mountains and on the shore of Lake Champlain. (Burlington itself has a population of about 40,000, while the metropolitan area has about 214,000 people.) The setting is as idyllic as it sounds. Undoubtedly, it was the unspoiled surroundings and the recreational opportunities that drew many newcomers here during the 1960s and 1970s. Burlington became a destination for those who wanted to escape big cities but were not quite ready for a dropout’s life on a farm or in a commune. (The rest of Vermont offered those alternatives.) Burlington also attracted young professionals and entrepreneurs who were looking for a low-key urban life. The city’s most famous success story of that era is Ben & Jerry’s, whose first ice cream parlor was located in an abandoned service station downtown. High-tech corporations also found Burlington congenial, and IBM and Digital Equipment Corporation established plants in the area. While not quite in the same league as booming Raleigh-Durham, Burlington exhibits many of the characteristics of the larger college city: a busy regional airport and university medical center, growing white-collar employment, and a beautiful environment.

I used to live close to Burlington, just over the Canadian border. My wife and I would frequently make the 90-minute drive, sometimes to shop, sometimes to visit the nearby Shelburne Museum—an extraordinary collection of historic buildings and artifacts—and sometimes to go sailing with friends on Lake Champlain. But most often we would go with no particular aim in mind, just to stroll the streets.

We would usually end up on Church Street, where a legacy of that urban design fad of the 1970s still exists: the main street converted into a pedestrian mall. The malls of that period were usually a last-ditch effort to resuscitate declining downtowns; today, with their crumbling planters and unpainted benches, most downtown malls are deserted. Church Street is an exception: it’s a busy and thriving thoroughfare crowded with adults, children and dogs. There are sidewalk vendors, several good bookstores, an art supply store, the inevitable Banana Republic, and a number of restaurants, bistros and cafés—a veritable Green Mountain Saint-Germain-des-Prés.

I exaggerate, but there is at least one real similarity to Paris’s Left Bank: the place is teeming with students. (There are about 12,000 of them in Burlington, enrolled at the University of Vermont and two other colleges.) The presence of so many young people may be one of the secrets to the success of college cities like Burlington. College students are generally bright, healthy, social and usually unencumbered by serious financial worries. They typically don’t have large, comfortable homes to retreat to—or families to take care of—and so they tend to inhabit the public realm. At night, students are out and about; downtown Burlington has two independently owned cinemas as well as a renovated theater. Although some might complain that students, by their nature, can be bothersome, they contribute a vital ingredient to urban life. Unlike their career-focused elders, college students really do have the time to sit in a café or dawdle on the village green, which is why many college cities have retained the vibrant kind of public street life that was once characteristic of larger cities. Who would have thought that the ivory tower would nurture that precious but rapidly disappearing commodity: city life.