By Lynne Huffer - Falguni A. Sheth 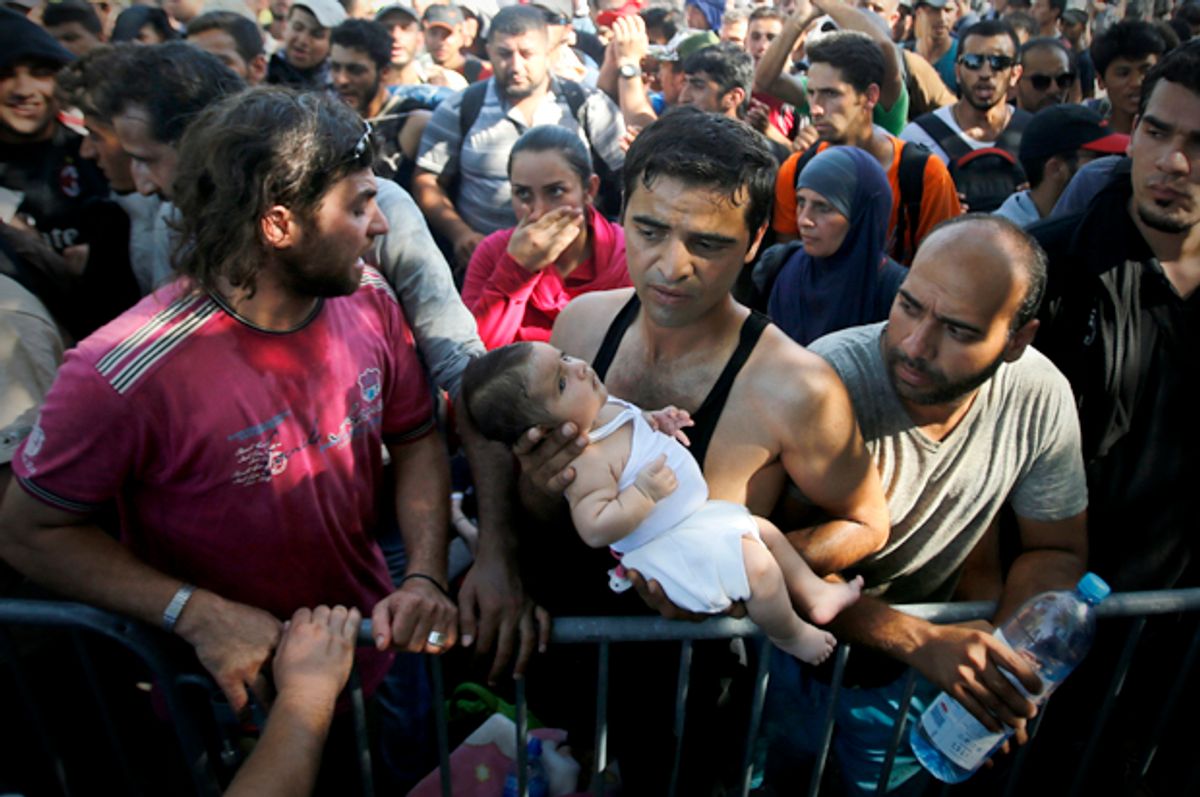 Why must we wait for a wave of empathy in order for European and North American nations to open their borders to stateless migrants?

In recent weeks, we have been inundated with pictures of Aylan Kurdi, the 3-year-old boy who was found washed up on a beach in Turkey. Rightly so, the world has been moved by his plight, and his father’s and aunt’s grief in the face of the tragic deaths of Aylan and his siblings and mother. They drowned in the simple act of trying to escape unrest in their homeland.

Yet, with the image of Aylan’s dead body splashed across news outlets and tweeted around the world, commentators have found hope in the empathy his family’s grief has inspired. Kurdi’s death was showcased as if it were singular, rather than one of thousands, part of an unceasing epidemic of migrant deaths. According to the International Organisation for Migration, in 2015 more than 2,600 migrants have drowned trying to cross the Mediterranean. For example, in April 2015, 400 migrants, including many children, who were trying to reach the southern coast of Italy by boat, were drowned within a day of leaving the coast of Libya. Last month, 200 people from South Asia, sub-Saharan Africa, Syria and Morocco drowned off the coast of Libya, again trying to escape the political unrest and turmoil. Overland routes have also proved to be dangerous. Just a few days prior to the drownings in August, another 71 refugees were found suffocated in the back of a sealed truck trying to cross into Austria. Four children were among them, including a girl under the age of 2.

Aylan’s tragic fate seems to have become newsworthy because it induced shock and compassion among its audience, prompting further media coverage of the horrifying way in which  the little boy met his death. It seems to have been a most effective method of prompting reluctant heads of various states to make provisions for the waves of migrants appearing on European shores. Even the New York Times Editorial Board heaved a sigh of relief that the plight of “the refugees” would finally be recognized. The Times urges that something be done by the European Commission “before the emotions triggered by the photos fade and more people die.”

Must we hide behind empathy in order for European and North American nations to recognize their obligations to take in stateless people? There is something extremely troublesome about this formulation of the crisis. While empathy is an important component of human relationships, it is a poor foundation for international policy.

The plight of the stateless is long-standing, one that will not be solved by a moment of compassion. Empathy will hardly protect stateless migrants who have lost what the philosopher Hannah Arendt called in 1951 “the right to have rights.” In sheer numbers, the refugee situation today parallels the European “shock” Arendt described with the post-WWII displacement of millions of people. Today, more than 4 million people have been displaced from Syria alone, and the total number of migrants coming into Eastern Europe in the first five months of 2015 is estimated at 153,000. Germany anticipates receiving 800,000 refugees by the end of 2015.

The recent call for empathy-based policies toward refugees substitutes a mercurial, apolitical emotion for a substantive analysis and solution to the current crisis. We want to believe in the appeal of human rights: that basic human dignity will win out over the baser emotions that drive sectarian conflicts. But as Arendt points out, such appeals rely on a faith in an abstract capacity to provide protections for the most vulnerable among us regardless of citizenship status. If Europeans believed in the basic Rights of Man prior to the two world wars, “the arrival of the stateless people” in the mid-twentieth century “brought an end to this illusion.” Describing statelessness as “the newest mass phenomenon in contemporary history,” Arendt denounced the “discrepancy between the efforts of well-meaning idealists” invoking “‘inalienable’ human rights” and “the situation of the rightless themselves.”

The parallels between Arendt’s time and our own are telling. Arendt was reflecting on the situation of minorities and refugees, displaced from their lands by catastrophic events that left millions unwanted, unrecognized and unprotected either by the governments of their homelands or by the nations who had signed treaties promising to welcome them into their own borders.

Rather than being welcomed, these populations had become, effectively, what Arendt called the “scum of the earth.” This, despite the 1948 Universal Declaration of Human Rights for all the world’s peoples. Arendt noted then what we see today with alarming clarity: Without the protections of the nation-state and a political belonging to a society that the nation provides, those human rights are an elusive chimera. To be stateless--to be deprived of a place in the world--is, in fact, to be shorn of human rights. It is to confront what, as Arendt reminds us, Edmund Burke called “the abstract nakedness of being nothing but human.” No amount of humanitarian idealism will mitigate the dangers of that stark human reality.

It is insufficient to insist that refugees and migrants, whether of Arendt’s time or our own, have inviolable human rights guaranteed by an appeal to the noble sentiments that bind us all into a human community. The current refugee crisis shows us that even in today’s hyper-globalized world, that old-fashioned entity called the nation-state still matters. “We have really started to live in One World,” Arendt wrote. And “only with [the] completely organized humanity” of a globalized world “could the loss of home and political status become identical with expulsion from humanity altogether.” If state borders mean little for the circulation of capital, elites, and cyber-data, for migrants like Aylan those borders mean everything: shelter, protection from violence, life itself.

Arendt’s extremely prescient argument, one still relevant today, is that the glaring humanitarian crisis cannot be resolved until we understand its political nature: namely that as long as people are stateless, their humanitarian violations will never be adequately addressed. As Arendt showed after WWII, one’s “loss of a polity” meant expulsion from humanity. Misery, starvation, drowning, suffocation, teargas, being crowded into trains that lead only to internment camps--isn’t this similar, if not identical, to what expulsions look like today. Those violations of basic human rights can only be redressed when nations step up and claim the stateless as their own, not as abstract humans, but as members of a polity.

To be sure, we don’t believe that all problems can or should be solved through the nation-state; nor do we think that the state is uncritically the solution to all that is wrong in the world; certainly, it is the nation-state, in its visage as empire, that has been one of the major forces behind the instability in many parts of the world where migrants are now fleeing. But for that reason as well, because we are convinced by Arendt’s argument that human rights violations can’t be redressed or pre-empted unless there is a credible commitment to protection that can only be expressed through sovereign claims, at least in this case, the nations of Europe and North America could go a long way toward helping to mitigate the humanitarian crisis that is occurring in our midst.

Those of us who belong to nations do bear a responsibility to those who do not. Precisely because our human rights are secured through our belonging to a nation-state, our responsibility to the stateless stems from that fact. It is up to us as peoples who belong to nations to push our governments to step up and fulfill their obligations to the stateless not through an abstract humanitarian appeal but through the legal and political apparatus of our nations. There is no time to wait for the perfect wave of emotion to spring us to action.

Lynne Huffer, a Public Voices Fellow at the OpEd Project, writes about sexuality, feminism, and politics. She is the Samuel Candler Dobbs Professor of Women’s, Gender, and Sexuality Studies at Emory University