Glenn Beck vs. Donald Trump: Why the wing-nut icon's new war on the billionaire really matters

When one iconic conservative provocateur calls out another, it isn't just a feud — it's a civil war 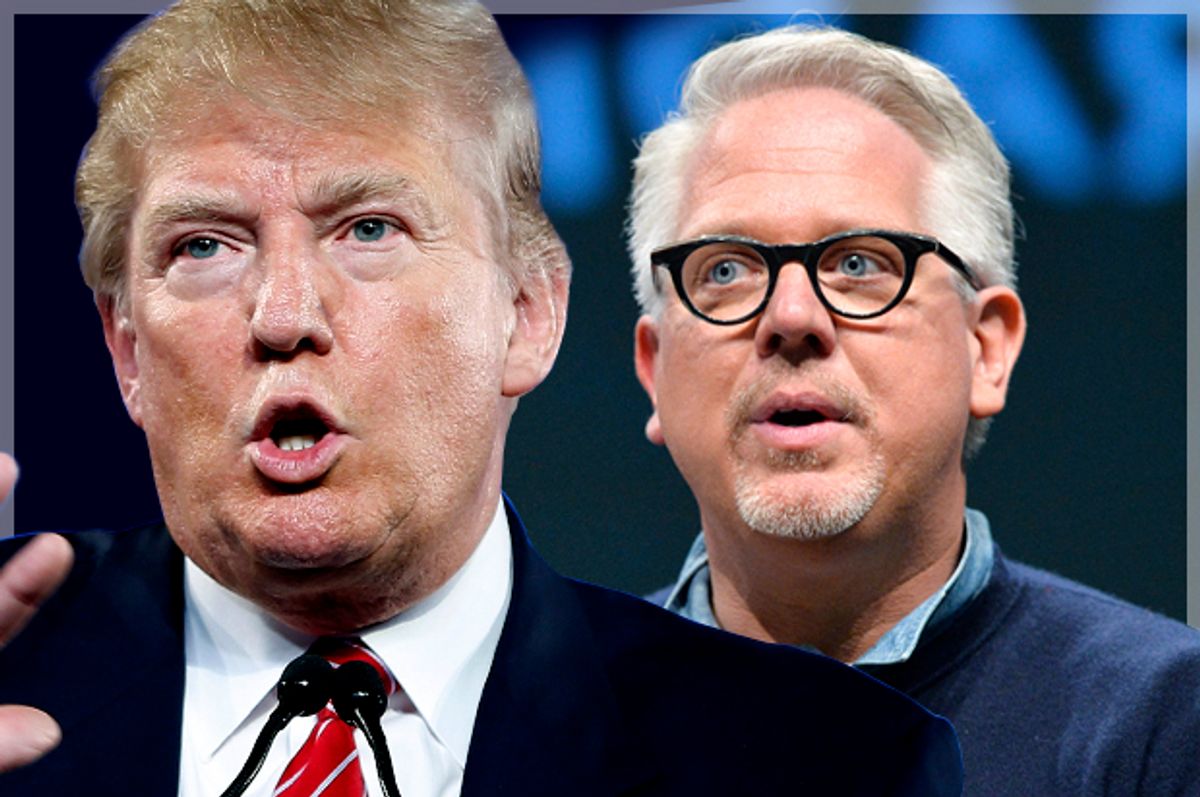 Donald Trump finally came under some real fire at both Wednesday debates, with Gov. Bobby Jindal throwing hard, if distant, punches Trump’s way in the minor league debate earlier in the evening and several candidates pouncing on the leader in the prime-time event. But Trump’s bad week started with a potentially much more damaging attack from Glenn Beck, who went third-rail on Monday to accuse many of Trump’s supporters of being racist. (This accusation would actually be corroborated later in the week.) The shots from fellow candidates on the debate stage still stayed within the parameters of primary propriety, sharp at times but ultimately safe, in accord with the rules of engagement. Only electoral flesh wounds were delivered. Glenn Beck’s attack went to the heart of the Trump phenomenon, with the conservative talker naming the elephant in the room: Trump’s Tea Party supporters are racist.

You're not supposed to even entertain that notion in conservative circles. It's a pure fabrication of Democrats and their liberal media machine, goes the conservative line. In fact, conservatives constructed a defense against charges of racism modeled on the "he who smelt it, dealt it" logic of third grade: To name racism is to perpetuate it. Sure, millions of us have watched seven years of unprecedented GOP obstructionism vis-à-vis Obama and identified the motor of that extraordinary belligerence to be a reactionary white response to the first black president. But it’s been the factor that shall not be named on the right--until now. “If you were a Tea Party person, then you were lying,” said Beck about Tea Party supporters of Trump. “You were lying. It was about Barack Obama being black.”

Just so we’re clear: You’re a racist liar if you consider yourself a Tea Partyer and you support Trump, says Beck. That should go ever well.

Beck was speaking about the collective casualness with which Trump supporters blithely overlook vast swaths of Trump’s ideological history after obsessing over every detail of candidate Obama’s past. Every meeting, association and handshake of Obama’s was probed to find the “real Obama.” Everything that Obama had ever written was gone through with a fine-tooth comb to find secret allegiances. Plumbing Obama’s past not only included his adult and political life but considered his college years, his childhood in Indonesia, all the way back to his birth, which Donald Trump famously doubted to have occurred in the United States.

Meanwhile, anything Trump said before June of this year is considered irrelevant. His support for a range of liberal positions don’t matter anymore. His years as a Democratic voter, his donations to Democratic candidates, his friendship with Hillary Clinton: all forgiven. Jeb Bush released a campaign video composed of Trump’s most New-York-liberal moments a few weeks ago. Hitherto it would have been enough to sink virtually any candidate in the GOP primary contest, but Trump is, as Beck notes, seemingly impervious to such attacks. Since the video’s release, Trump’s poll numbers have continued to climb while Bush’s follow their downward trajectory.

“I cannot understand the Trump thing, and it scares the hell out of me,” admitted Beck. The Trump phenomenon has confounded pundits, commentators and liberals, but we’re beginning to see how the candidate’s seemingly bulletproof campaign is concerning those politically closest to Trump’s supporters. Beck’s fear and frustration even led him to enter into verboten territory and effectively confirm the racial basis of anti-Obama sentiment of the last eight years. The charge quickly spread on conservative media, and Beck was under fire within hours.

Beck wasn’t content with calling a great many of Trump’s supporters racists, though. Beck reached into his quiver to pull out an old favorite, comparing the real-estate-mogul-cum-demagogue to Stalin and Lenin. The conversation turned to Trump’s megalomania and his desire to have his proposed border wall emblazoned with his name after his death. “That’s scary. That’s what a dictator says,” Beck charged. “I mean, remember, it was Leningrad, and then it was Stalingrad. That’s what dictators do. That’s what dictators do.”

Conventional wisdom still has Trump (somehow) falling away to allow for a proper candidate to rise to the nomination. But even in that eventuality, how does the Republican ship weather the storm? What was a simmering crisis for the GOP with the emergence of the Tea Party rebellion is now a circular firing squad. The rifts caused by Trump’s venomous insurgency have dramatically widened the preexisting fault lines between the party establishment and a bulk of the conservative base, but new battle lines reveal themselves among the base itself. Where you expect alliances to develop, like between Beck and Trump, we find revelations of even more latent fissures in the Republican coalition. The divisions might be mended in a less combative environment, but Trump has also infected the infighting with rhetoric not easily forgotten or forgiven. It's a sort of rhetorical arms race, and the only way to fight trump is to ratchet up your attacks to his caliber. This is turning into a melee. The party is falling apart. The center cannot hold. What rough beast slouches toward Washington to be born?