Stop calling Pope Francis progressive: You might love his pastoral style, but don't fool yourself on Vatican substance 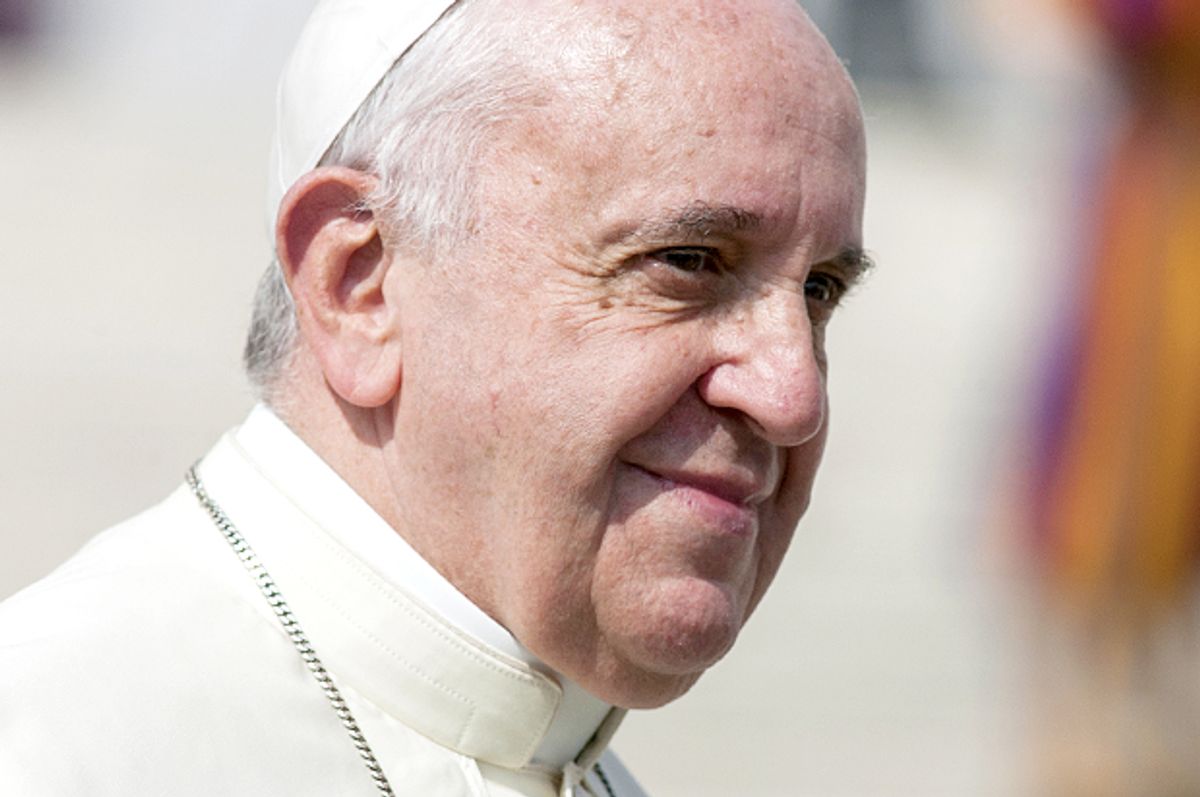 Consider the following hypothetical: I am at a party. My friends approach me and speak in glowing terms about their new friend, Jim —specifically how progressive he is, despite the conservative nature of the organization he leads. When Jim arrives, my friends steer the conversation toward politics and policy. Jim joins in the conversation by explaining how men and women are not, in fact, equal and that it is only right that there are positions and opportunities available in his company to men that are forbidden to women. While on the subject of equality, he also explains that homosexuality is an abomination and to afford LGBTQQI individuals the same rights as heterosexuals is a threat to civilization. Among the things he also counts as threats to civilization are a woman’s right to use birth control or have an abortion.

I tell Jim I  disagree vehemently with him on these points and excuse myself. My friends hurry after me and urge me to wait — listen to Jim’s calls for action on climate change, his advocacy for Syrian refugees, his rhetoric in support of economic justice, the nights he’s spent feeding those living in poverty.

While those are all noble endeavors, Jim remains a sexist, and bigoted toward LGBT folks, too. I cringe and wonder, since when is Jim what they consider progressive? Absurd.

While I don’t believe anyone would actually tout the fictional Jim as a progressive, Pope Francis is routinely considered to be one, and it is no less absurd. Pope Francis is praised by progressives despite his sexist statements about women and hypocritical and discriminatory treatment of them, his extremist remarks about gays and comparison of transgender individuals to nuclear weapons and the Church’s discriminatory, exclusionary policies toward women and LGBTQQI people. He is lauded for his advocacy for climate change while numerous sources have criticized his hypocrisy on the subject, since the U.N. has called for family planning initiatives the church adamantly opposes as an important tool to combat climate change.

Sexist bigots should not be congratulated for their good points, nor called progressives, nor radicals, nor a breath of fresh air, nor reformers. Progressive should not be saying, as they do when they support Pope Francis, that sexism and homophobia – at least when dressed in religious garb – is OK. (Or at least some religious garb: I haven’t noticed progressives touting the good works of otherwise homophobic and sexist Evangelical Christians or ultra-Orthodox Jews or Fundamentalist Muslims.)

Progressives must do better, must not tacitly condone sexism or homophobia. Progressives must insist that women, LGBTQQI folks, low-income people, the disabled, immigrants and refugees and people of all ages and races from all faiths are included by anyone they hold up as a good progressive, not to mention hold up as a good person. Progressives must insist on inclusion of both domestic and global communities. As the nuns taught me, what is right does not end at the water’s edge. Progressives need to hold the line: to leave out one is to leave out all. If it’s not intersectional, it’s not progressive – and it’s not right -- even when it’s wearing the pope’s mitre.

Pope Francis has made many savvy comments about love and service and acceptance that may appeal to our deepest sense of what is right, but in reality, Pope Francis is no more progressive than his predecessors.  As Pope Benedict’s own secretary, Archbishop Georg Ganswein, has pointed out, the differences between the two are stylistic, not substantive. "I know of no doctrinal statements from Pope Francis which are contrary to the statements of his predecessor. That would be absurd, too. It is one thing to emphasize the pastoral efforts more clearly because the situation requires it. It is something else entirely to make a change in teaching.” In what appears to be a well-orchestrated P.R. effort Pope Francis simply chooses to focus on issues that better resonate with the American public and use softer language to describe unchanged positions.

To date, American progressives have bought this new tone and offer praise and even adulation.  Why are they willing to grade Pope Francis on a curve?  Doing so is not just wrong, but dangerous.  Promoting Pope Francis as a reformer only increases the Catholic Church's ability to raise money and exert influence, usually in ways antithetical to progressive ideals. Perhaps the most dangerous byproduct of the left’s love of Pope Francis is more effective fundraising by the Church in the United States from Catholics who feel more positively toward the Pope as they see him heralded by the left and believe he is more in step with their positions.  As I previously pointed out, about a third of the Catholic Church’s charitable contributions come from U.S. Catholics. The more popular the pope, the easier it is for the Church to raise money and promote anti-progressive policies and lobby against progressive reforms and initiatives around the world.

While I take significant issue with the positions of the Catholic Church, I take no issue with the pope’s advocacy of these issues. It is his job to do what he see fits to advance the Church.  He believes that means denying full rights to those with “homosexual tendencies,” placing limits on positions available to women and protecting pedophiles. It is his right to rally the Church to oppose women's reproductive rights and equality for gays and lesbians. Furthermore, it is sound strategy on his part (albeit for a bad cause) to obfuscate these positions in the United States where they are unpopular and instead focus on issues like climate change, poverty and refugee crises that sync to the values of the majority of American Catholics.

The problem I have is not with Pope Francis, per se, but with progressives and members of the media who have embraced him. Three-quarters of self-identified liberals view this pope favorably. They credit him with bringing about great change despite the fact that it just hasn’t happened. They believe he is something that he is not. For instance, among Catholics that support same-sex marriage, only 36 percent thought Francis was opposed to it, while 49 percent said he supports it. For the record, Pope Francis and the Catholic Church are against same-sex marriage. Progressive defenders of Pope Francis are also wrong when they argue that even the pope cannot change the Catholic Church overnight. In reference to making a change about ordination of women, Robert McClory points out in the National Catholic Reporter that “[a]nyone can open the door with the right key. And in the tradition of Catholicism, who holds the keys?”

American Catholics have the luxury to often simply ignore Catholic doctrine with which they disagree. Despite the church’s prohibition, 98 percent of sexually experienced Catholic women of childbearing years have used birth control. Ignoring Catholic doctrine is not an option around the world where the Catholic Church has enormous influence on restricting access to birth control and preventing abortion access and is the largest non-governmental healthcare provider. American progressives are helping the Catholic Church, which runs more than one-quarter of the world’s healthcare facilities, to implement global policies they would find unacceptable if implemented here. Rallying for reproductive rights in the United States while funding healthcare providers that deny those rights overseas is an abomination.

According to the Pew Research Center “[a]bout one-in-five religious advocacy organizations in Washington have a Roman Catholic perspective.” The same report explains that in 2009 the U.S. Conference of Catholic Bishops alone spent about $27 million on “policy activity expenses,” placing that just behind AIPAC and ahead of the Family Research Council in spending by religion-related advocacy organizations. While the Church refuses to disclose the exact amount it spends on anti-choice lobbying efforts at the state and federal level in the U.S., the Church wields tremendous influence over abortion legislation.

These are the efforts the liberal Catholics and progressives of any faith are tacitly supporting when they support Pope Francis. What other world leader is hailed as a reformer while pushing such an agenda?

To be progressive means something. According to the American Values Project, progressive political values can be summarized as a belief in “freedom with opportunity for all, responsibility from all, and cooperation among all.” When we salute Pope Francis, we fail as progressives. This pope does not include all.

While I wish he were more honest, rather than try to hide the church’s less-popular positions behind softer language, Pope Francis isn’t wrong to advocate for the positions in which he and the Catholic Church believe. Pope Francis described himself as both “a little naïve” and “a little furbo”—shrewd, clever, even tricky. It is certainly furbo to convince one’s opponents that you share their beliefs. Progressives – and savvy media -- should know better than to fall for his act.

Progressives should require that Pope Francis, or any leader, meet a minimum standard — to support equal opportunity regardless of race, gender, sexuality, class, disability and migrant/refugee status. To fail in any of these categories is, quite simply, to fail. And Pope Francis certainly fails. Progressives can do better than to laud this man. Progressives can be intersectional in our approach. One of the tenets of social justice I was taught in Catholic school was that we are all in chains until we are all free, as any social justice-conscious Jesuit like Pope Francis must realize. It’s up to us. Let us go forth to love and serve one another.