Taylor Swift and Ryan Adams, marriage of convenience: He regains relevance, she collects alt-cred with his covers of "1989" 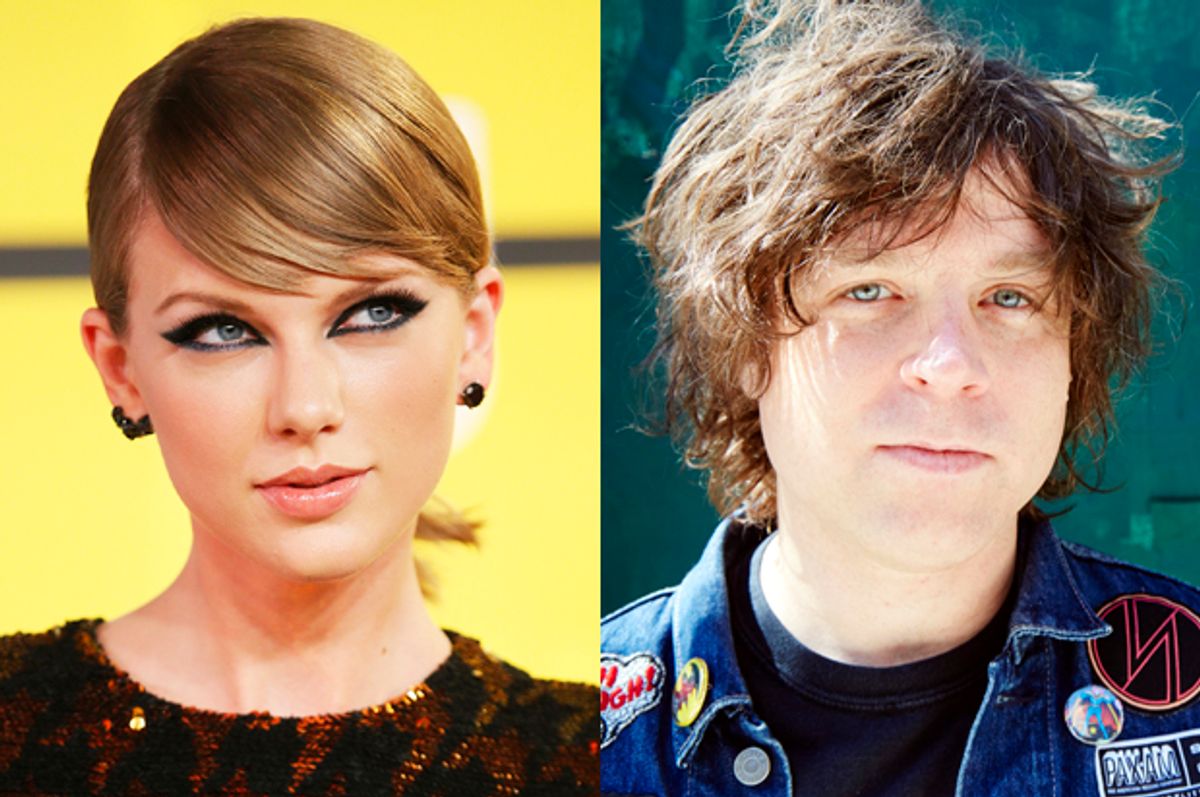 For music fans on several points on the pop-rock spectrum – alt country fans, suburban teenagers, irony-mongers – this week is important because it marks the release of an album that’s both awaited and feared: Ryan Adams’ song-by-song cover of Taylor Swift’s “1989.” It’s a baffling hybrid; Stereogum calls it “the unlikely musical event of the century.”

Whatever its musical quality – more on that in a second – it’s certainly the most successful marriage of convenience in a long time. How can this union be both musically unlikely and perfectly logical from a marketing standpoint?

Despite a stage-managed image as a sincere underdog who stands up for her girlfriends, Swift is an enormously rich and powerful figure. In a period in which musicians struggle to sell more than a few thousand copies of their recordings, Swift has moved more than five million copies of “1989.” She gets generally good reviews, with exceptions. Some have argued that she’s a real musician who grownups should pay attention to, some see her as a likable lightweight. In short, she’s got more money than many small nations – and five houses -- but there are kinds of credibility that elude her.

On the other side sits Ryan Adams, who has managed to be consistently inconsistent (or vice versa) for a long time now. For a decade or more he has seemed to be on the verge of either breaking out bigtime or completely self-destructing. He can be an arresting live performer, his records are often good (sometimes great), and he has maintained a following since his days with alt-country band Whiskeytown. But across his busy solo career – four discs of music in one year, for instance - which began with “Heartbreaker,” from 2000, he has sold fewer albums than Swift has already sold with “1989.” As brilliant as he can be, it’s been a long time since he was at the center of things.

So by reworking one of the bestselling records of the century, Ryan gets pop currency, and Taylor gets outlaw credibility. It’s a wonder a corporate branding firm didn’t think of it first.

Is the album a purely opportunistic ploy by Adams? Probably not. The music writer who has followed Adams most closely, since the beginning, is probably David Menconi of the Raleigh News & Observer. Menconi, author of a book on the musician,   wrote on his blog:

My take on this whole thing is it’s just Ryan getting excited about a weird idea and running with it, because he can. But really, any of Ryan’s fans who think [“1989”] is somehow out of character just haven’t been paying attention because it perfectly fits his career. He’s always played covers of pop songs you’d think would be beneath him, and this also isn’t the first time he’s recorded someone else’s album that he admired (see: his version of The Strokes' "Is This It?").

So how does this odd experiment work musically? It’s certainly listenable, at times better than that, and if Adams approached the whole thing cynically or ironically, it’s hard to hear that in the songs. He means it. In fact, his brings the usual Ryan Adams virtues – melancholy and yearning in the vocals, somehow both vulnerable and traditionally masculine.

The Adams “1989” will give Swift apologists ammunition to champion her as a Serious Artist. See how great these songs already were?

But it’s not clear how much of the songwriting Swift actually contributed: Most of the songs were co-written with Max Martin and Shellback, part of the pop factory that’s churned out hits for Maroon 5, Britney Spears, and N Sync.

Swift herself has said, in an Apple Music interview with Adams and Zane Lowe, that Adams' album is “not cover songs. They’re reimaginings of my songs, and you can tell that he was in a different place emotionally than I was. There’s this beautiful aching sadness and longing in this album that doesn’t exist in the original.”

That is for sure. Most of the songs are completely transformed, slowed down, and only “Bad Blood” can’t quite escape its original. Though the lyrics are the same, the emotions are more complex, the musical textures less machine-made. Compare, especially, his “Welcome to New York” to her automated version. “Out of the Woods” and “All You Had to Do Was Stay” really sound like Ryan Adams songs now.

Besides his singing, which is vastly more expressive than Swift’s, Adams has found a completely different take on the ‘80s than she did. Instead of the faceless, corporate dance-pop she’s channeling, Adams is pulling from the jangly alt-rock – the arpeggiated guitars of the Smiths, the introverted chime of R.E.M. and other Southern-pop bands – that defined itself against the drum-machine crowd.

Call if what you like, then. But though the lyrics and chords are mostly unchanged, a lot of it sounds nothing like Swift’s “1989.” A handful of us, at least, are grateful for that.