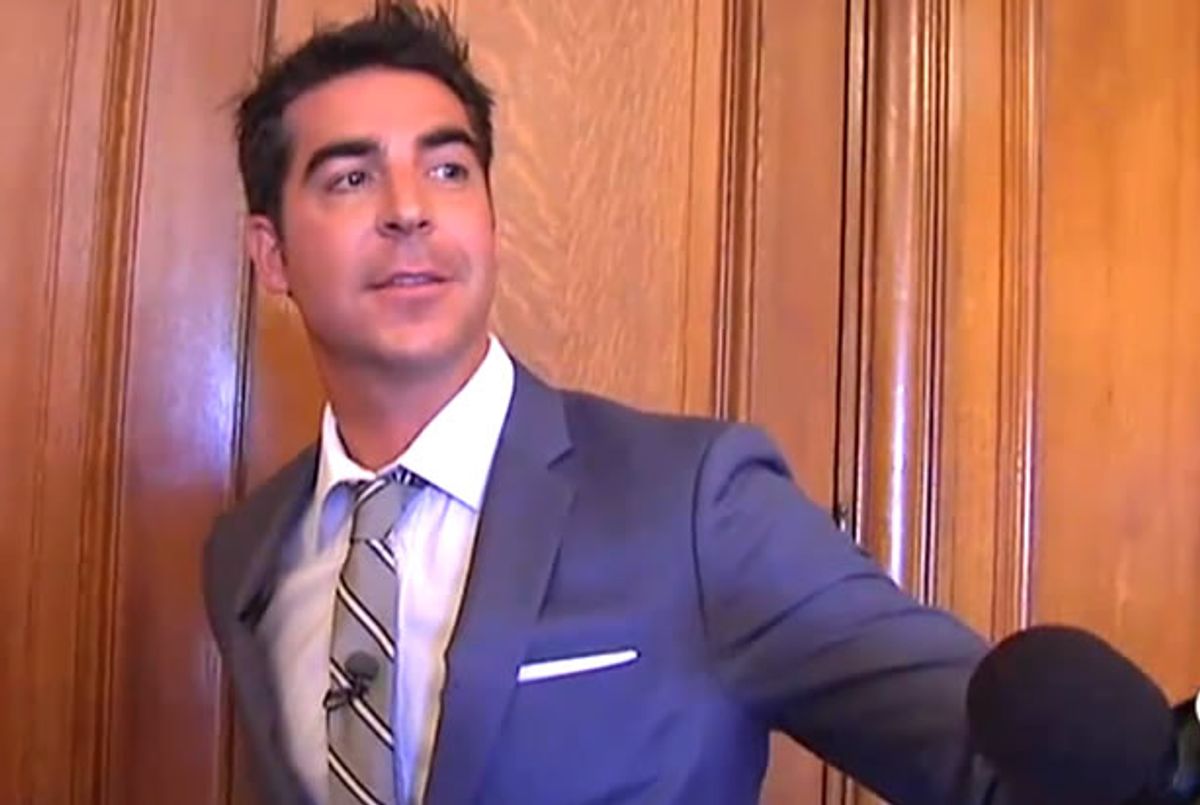 You may not know the name Jesse Watters, but you probably know his smug face. He has been a producer of Fox News’ "O’Reilly Factor" and the host of his own segment, “Watters World,” for over 10 years. His shtick is effectively that of O’Reilly’s henchman. O’Reilly is too lazy, old, or well-known to carry out his own tabloid shenanigans, so he has a sycophantic frat boy sidekick, Jesse Watters, carry his putrid water on a weekly basis. Watters' “journalistic” traits consist of ambush interviews, airing white man grievances, baiting vagrants, and laughing at Bill O’Reilly’s half-assed jokes. Of all the terrible personalities at Fox News, Jesse Watters may be the worst.

In 2009, Bill Moyers temporarily retired from weekly television, telling his audience that at 75 years old, he felt his "time was up." Now, Moyers would shortly return to PBS, but at the time Bill O’Reilly was convinced it was Jesse Watters' 2007 ambush interview that did him in. Moyers' alleged transgression was calling for George W.  Bush to be impeached; a position O’Reilly and his other lackey, Bernie Goldberg, thought wasn’t “journalistic."

In her first-person account of her own experience with Dirty Watters, Amanda Terkel, then the managing editor of Think Progress, detailed actions that would be borderline illegal in most states. Her piece describes a series of episodes of stalking and harassment. Watters and his cameraman staked out her D.C. apartment for a few hours and then followed her to rural Virgina for two hours when she went on vacation. Watters and his flunkie proceeded to ask her a series of hostile questions. When she attempted to answer, he followed her down the street while accusing her of "causing pain and suffering" to rape victims. Classy stuff.

As part of the Murdoch empire's entirely made-up "homeless epidemic" caused by "de Blasio's New York," Watters bravely went to Grand Central station to find a handful of homeless people and cherry-picked their quotes to make it seem like Manhattan was being overrun by "synthetic-drug"-fueled vagrants. Peppered with some vox pop from the bridge-and-tunnel crowd, Watters' piece gave the viewer the impression that since Mayor Bill de Blasio took over, homelessness had skyrocketed and was covering the city in the foul stench of hopeless despair. Watch the clip below:

4. Trolling Muslims to get them to say dumb things about terrorism, 2013.

Sometimes Watters' addled brain can't quite come up with a coherent troll so he just shows up at a place with a vulnerable population and wings it. In this case, it's an American-Muslim conference where he asked some vague questions about terrorism. Here's poor Cenk Uygur trying to make sense of it a couple years ago:

One of Bill O'Reilly's favorite fictional themes (and he has several) is the "war on Christmas." Back in 2009, Jayne Gilmore, a Massachusetts elementary school principal, banned signs of Christmas (and Hanukkah) at her school causing (an entirely manufactured) uproar. O'Reilly's ambushing thug Jesse Watters got in his trademark black SUV and headed up the 1-95 to accost this otherwise obscure educator for committing the crime of tolerance. "Why are you trying to ruin Christmas for the children?" Watters asked, as he approached Gilmore in a parking lot. "We're just trying to help the kids."

Liberal columnist Hendrick Hertzberg once criticized Bill O'Reilly for having Newt Gingrich on his show and allowing him to claim, without question, that gays were engaging in violence against Christians over the vote to ban gay marriage in California. It was a rather benign critique, but it didn't stop Watters from stalking Hertzberg outside his Upper Westside apartment and confronting him on the street. Recalling the incident, Hertzberg describes the same thing as virtually all of Watters' subjects: the ambush interview crew never identified themselves, they simply approached and began shouting a series of loaded questions.

Watch the clip below starting around 0:35:

Much like Nancy Grace, "O'Reilly Factor "doesn't see brutal deaths and rapes to be a tragedy, but a tabloid opportunity to demagogue and mug for the camera about how tough on crime they are. In 2008, the Factor was pushing hard for Jessica's Law, a series of state laws that would create a mandatory minimum of 25 years for first-time child sex offenders. O'Reilly had some moral posturing to do so he sent Jesse Watters to the governors' conference in Philadephia to ambush-interview four governors who had yet to meet O'Reillly's boutique legislative priorities. Here are some of the choice questions he asked the governors:

"About how many dead girls are we going to tolerate here? I mean, over and over again, it's another story after another story out of Vermont?"

"Do you realize how much damage this is causing the state of Vermont?

"[About abortion doctor George Tiller who was murdered a year later] You know, there was a lot of evidence there that he was performing illegal late-term abortions and covering up instances of child rape."

Typical of Watters, his goal wasn't actually to get answers, but to morally browbeat his subjects. Dr. George Tiller, who was the victim of a concerted smear campaign by O'Reilly and others on Fox News, wasassassinated by Scott Roeder in May 2009.