My abortion made me happy: The story that started the #shoutyourabortion movement

We've been brainwashed to think we must regret our abortions. I have a good heart, and feel only gratitude for mine 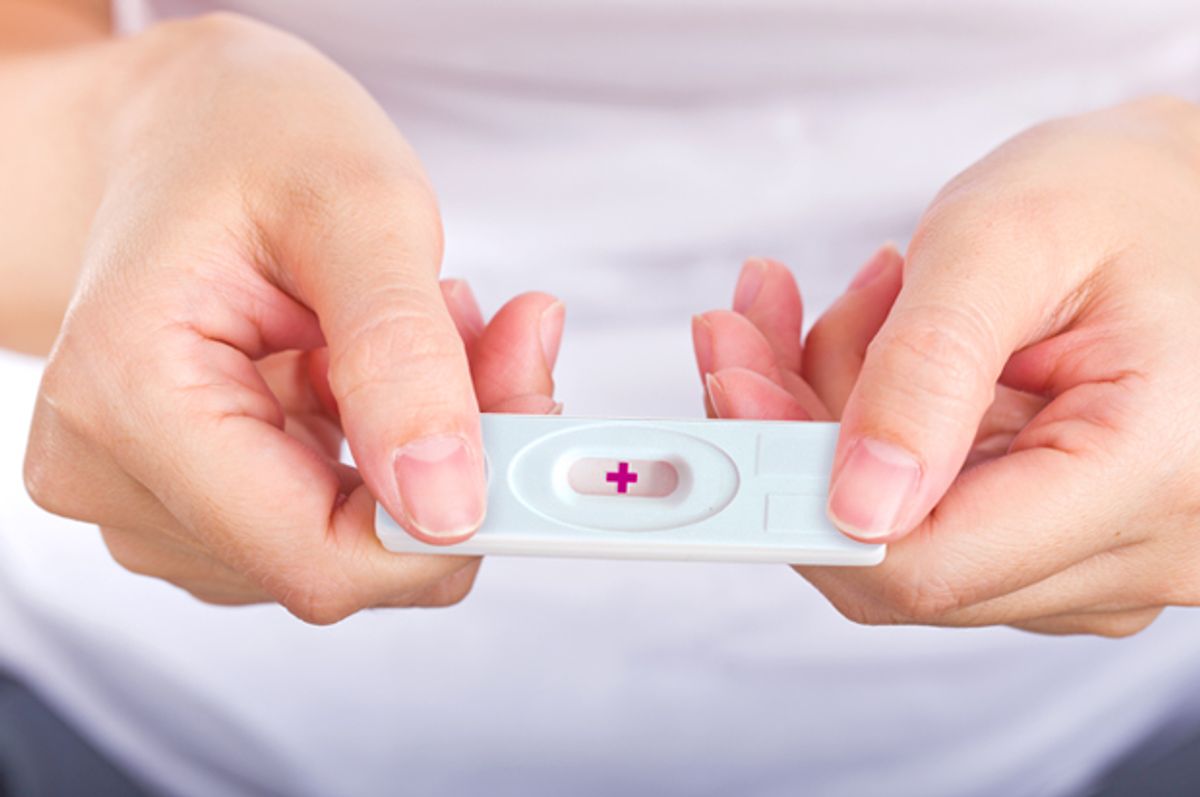 I am not going to explain the circumstances surrounding how and why I got pregnant, although the situation was strange. Often, women buffer the disclosure of their abortion with details that are meant to act as a justification for the procedure. Sometimes, when a woman gives you the back story, she is saying: “please continue to respect me even though I had the abortion I am about to tell you about, because it was not the bad kind of abortion and I am not the bad kind of woman.”

Were you being careful or not? Did you let him cum in you? Did you know he was going to? Why didn’t you take the morning after pill? Were you fucking more than one person? Do you know whose it was? Were you wasted? Is this your first abortion or your third? It does not matter. Pregnancy is what happens sometimes when people have sex, and an abortion is what happens when a woman becomes pregnant and does not wish to procreate--if she is lucky. If she, and whoever knocked her up, and her non-baby, and society at large are fucking lucky. There are zero abortion clinics in the entire state of Mississippi, and I had an abortion five blocks away from my apartment, because I am so lucky. I remember this experience with nothing but gratitude.

I took a pregnancy test in my friend Shannon's bathroom one morning after we had breakfast. It was an offhand choice to do it there; I certainly did not think I was pregnant. I just did it there because I remembered the test was in my purse and I had to pee. I peed on it while Shannon did her morning routine on the other side of the door, stream of consciousness-style emptying her brain into the room and changing shoes five times and I sort of lost myself in her blather and forgot what I was doing and then I glanced down and saw the plus sign. I wandered out of the bathroom and pointed the stick at her. She looked at me hard, the way that people do when they are collecting data from another person’s face in order to determine exactly what that person needs as quickly as possible. I set the test down on the coffee table and lit a cigarette. My phone lit up with a text from Michael, our other best friend who lives upstairs, and I told him to come down. He walked in, buoyant as always, and the two of us silently motioned to the test, which was lying on the coffee table and pointing at the empty space between me and Shannon like a do-over in a game of spin the bottle. He choked on some words and lurched his body toward both of us, his wide eyes darting between our two faces, and then we realized he didn’t know whose test it was and we laughed and I raised my hand like a teenager in detention and we all laughed.

I didn’t feel bad, or even necessarily that alarmed. The only thing I really felt was surprise. Then I felt a familiar wave of calm, which I have felt in every difficult moment of my life. This wave is the promise of my own future resilience. It's sort of a mantra, although I have never invoked it deliberately; it's just where my mind goes when things are very bad. The wave says: you can do this, and after you do, you will take it with you, and it will be power. I'm incredibly faithless at times, so this reaction is pleasantly incongruous with much of my nature.

Earlier that day, I told my boyfriend that I was going to steal a pregnancy test from Walgreens because my tits seemed to be getting huge at the wrong time. I told him not to worry because pregnancy seemed wildly unlikely; he made an excellent joke about how he was positive that he did not "shoot up the club," and asked me to text him after I took the test. I didn’t want to tell him I was pregnant via text, so I texted him asking when he would be home from his errands and said I wanted to come over. He didn’t ask if I had taken the test; he knew that I had.

I walked into his bedroom, which was dark except for some afternoon sun creeping through the blinds, and I remember the dust lazily dancing in the beams of light. He was in his bed, hiding most of his face. He watched me take off my shoes, and we each willed time to move slowly because we knew that once the silence ended nothing would ever be the same. He is not old, but in that moment he looked old, and he looked sad, and I felt sort of sad for the first time. I slid into bed, which is the best place for this sort of moment to unfold between two people, and I kissed him. I told him that I was pregnant even though I didn’t need to. He sighed, and a few tears came out of his eyes. I had never seen that happen before. He held me really tight. Then he squeaked, “Are you mad at me?” which made me laugh because of course I was not mad at him, but how sweet and reasonable to ask; after all, he had knocked me up. Then he kissed me, and he looked at me, and he put his hands on my wrists and held me down and fucked me hard until I came, which was just what I needed to feel healthy and alive.

I went home and started to rearrange things. I wrote an email to my inner circle of friends and family telling them that I got knocked up and was fine but didn’t want to talk about it. I had a research paper due the following day, so I called my male professor on his cellphone and told him that my paper would be late because I accidentally got pregnant. That phone call could have quite easily been an email and I definitely could have left out the part about being pregnant, but I chose to go hard because making male authority figures squirm in this particular way makes me gleeful even though I am 30. He was cool about it, meaning that he offered me an indefinite extension and got off the phone as soon as possible.

I had already been planning to go to Palm Springs that weekend with two of my best friends, a couple of gay men who are as capable of flippant darkness as they are capable of providing deep, intuitive, complex emotional support. We spent four days speeding down stretches of dystopian desert highway in a gaudy Mustang convertible, eating pills, crying, laughing manically, and being held by each other. My tits were museum quality; the whole thing was perfect.

Here is the part where I tell you about the actual procedure: I am not kidding when I say that I have had visits to the bank that were much more unpleasant than that particular morning at Planned Parenthood. The only thing that happens at the Madison Avenue Planned Parenthood on Saturdays is abortion. Every person you see in the clinic is having an abortion, or helping someone have an abortion. The moment I entered the clinic that morning, I felt myself lift and become stronger because of the women around me. I felt connected to every woman I saw, and I tried to make them know this with my eyes. I used my eyes to thank every nurse, and to tell every woman in the waiting room that I felt strong and I wanted her to feel strong too. As I sat in the waiting room, I felt clear and calm. The nurse called my name and smiled at me; I kissed my boyfriend, rose to my feet, and walked toward the end of a mistake.

Before I entered the exam room, I sat down with a counselor. She was there to make sure that I was making the choice to end my pregnancy on my own volition, and that I felt informed and supported going into the procedure. She asked if I had questions. She held my eyes with hers, and asked me how I was feeling. I exploded into tears, because my gratitude felt inexpressible. I wanted to thank her and everyone in the clinic for believing in the importance of their work. For being proud of their work. Every woman in that clinic operated with a level of presence and care and intentionality that made me feel completely held. I didn’t even need to be held by them, because I have never been indoctrinated to believe that abortion is anything other than a woman choosing not to default into a life that she doesn’t want. Motherhood was not an option for me, so there was no choice to be made, and I felt certain that I would not feel guilt or sadness about the procedure after the fact. My conviction felt righteous in the most positive sense of the word. I tried to explain all of this. I tried to thank her enough. I told her I felt blessed. Exercising the right to control my own fertility, surrounded by strangers who felt like people I knew, made me feel like one of the luckiest women in the world. I am.

I don’t remember the faces of the two women who were in the room when I had an abortion. This might be because I was high on pills. I got high because I like getting high, not because I was scared. If I was scared, that feeling was so incongruous with the actual experience itself that it has been subsequently erased.

The procedure I had is commonly referred to as a Vacuum Aspiration, which tickles me because vacuuming is a thing you do in order to remove unwanted detritus from your life, and aspirations are hopes for your future, which can be destroyed by having children you don’t want. It did not hurt. It felt strange, in the same way that it feels strange when you are having your blood drawn and as the suction kicks in, you feel a quiet internal "pop" as something leaves that used to be inside of you. The whole thing was over in three minutes. I have had more painful experiences flossing my teeth when it’s been awhile.

I do not want to invalidate the feelings of fear, or ambivalence, or sadness, or regret, or deep psychological pain that many women have surrounding their own abortions. Those reactions belong to the women who feel them, as much as my gratitude belongs to me. However, I ache for women who feel shame after having an abortion, because I think shame is a dangerous and counterproductive emotion, and I believe that shame is almost always a product of social conditioning. I’m telling you my story plainly, proudly, flippantly even, because we have all been brainwashed to believe that the absence of negative emotions around having an abortion is the mark of an emotionally bankrupt person. It’s not. I have a good heart and my abortion made me happy. It’s perfectly reasonable to feel happy that you were not forced to become a mother.

Your life belongs to nobody but you; don’t ever let someone make you feel any other way.

Amelia Bonow is a writer and activist living in Seattle. She is a founder of #ShoutYourAbortion. Follow her on Twitter at @ameliabonow.