Sinister visions of America in crisis: Hollywood finally gets foreclosures right in "99 Homes"

The new film, starring Andrew Garfield and Michael Shannon, goes where too few movies have been willing 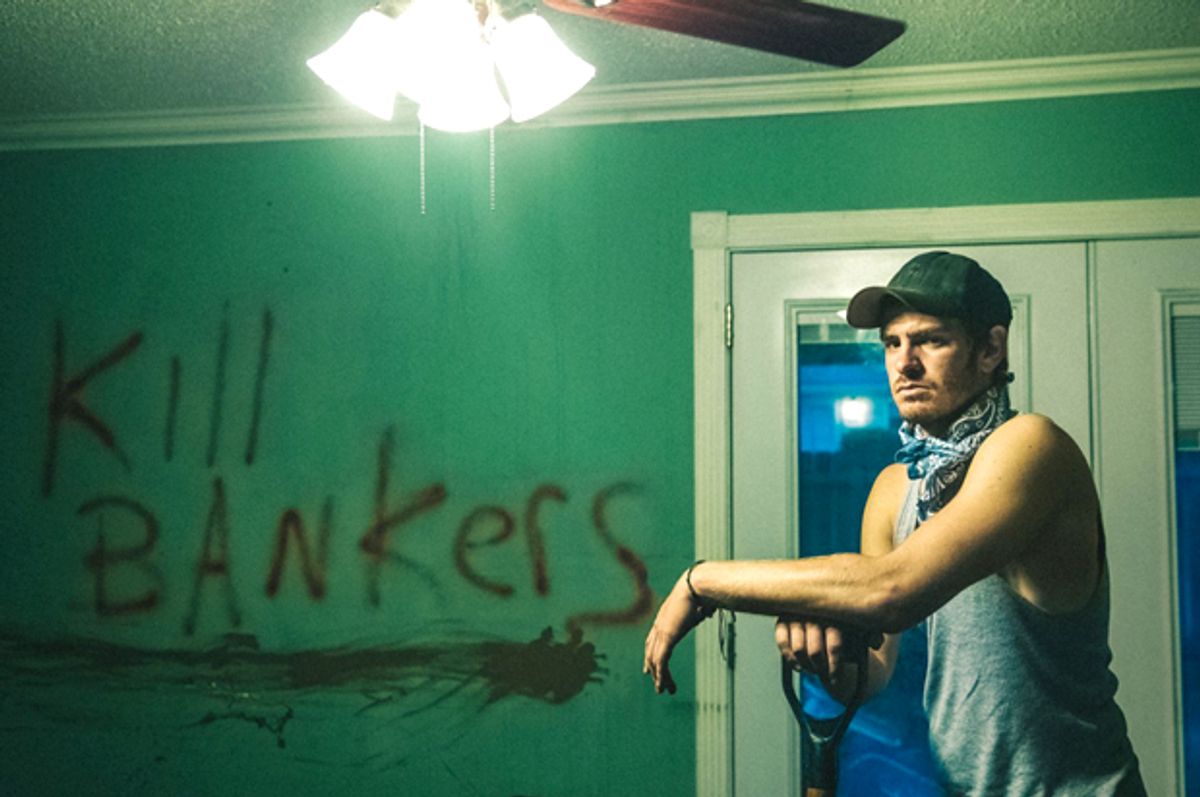 For all the impact of the financial crisis, we’ve seen only rare glimpses into its effect on popular culture. Hollywood has largely shrunk from depicting anxiety in the age of inequality, the pain of the recession on ordinary Americans caught in its wake.

But in "99 Homes" -- which begins showing Friday in Los Angeles and New York, and opens nationwide on October 9 -- director Ramin Bahrani offers the most authentic portrait of the foreclosure crisis ever committed to film. Bahrani spent weeks in Florida researching the subject, immersing himself in every facet of the sprawling foreclosure industry. And he found people at the mercy of an economy beyond their control, from homeowner victims living in transient motels along Highway 142 to real estate brokers forced to become agents of misery to survive.

The movie, which premiered at the Venice and Telluride film festivals last year, stars Andrew Garfield as Dennis Nash, an Orlando construction worker struggling to find work after the housing bubble collapses. One day, real estate broker Rick Carver (Michael Shannon), oozing sinister charm (having him vape throughout the film is a genius touch), appears at his door with a local sheriff, a clean-out crew and an order: You have two minutes to gather your belongings and leave the property. Nash leaves and finds a hotel to stay in; he says it’ll only be a couple days, and one of the residents replies, “That’s what I said two years ago.”

Before long, Nash begins working for Carver, learning how to become the enforcer of evictions on the other side. As he begins to profit from suffering, Nash must figure out how much he will sacrifice his ideals to keep his family (Laura Dern as his mother, and newcomer Noah Lomax as his son) free from desperation.

Incredibly, in talking to homeowners in Florida, Garfield met a day laborer who was evicted and then started performing evictions, the exact plot of the already-written movie. The man stopped after having to evict one of his best friends, but six months later the friend came to him and said he was forced into doing the same thing.

Bahrani heightened the emotional tumult of foreclosures by using a real sheriff who conducts evictions, a real clean-out crew who empties foreclosed homes, and in many cases, real homeowners having trouble paying their bills. “We had to make these headlines into real people, not a statistic,” Bahrani told Salon. “Every other victim was not an actor and I never told Andrew who was real.” The scenes pull no punches: real estate agents carry a gun into evictions, and the film opens on the bloodied bathroom of a man who would rather kill himself than leave his home.

Foreclosure suicides are distressingly commonplace. In fact, many of the film’s core scenes come out of Bahrani’s experiences in Florida. The director connected with activists like Lynn Szymoniak, the foreclosure victim, anti-fraud specialist and whistleblower who helped the government win $95 million from banks in 2012.

Szymoniak showed Bahrani Florida’s “rocket docket” foreclosure courts, where defendants get 60 seconds to save their homes, and toured abandoned properties full of mold and buckling roofs. (Full disclosure: Lynn has taken me on this tour, which I wrote about for Salon, and she is a main character in my non-fiction book about the foreclosure crisis, "Chain of Title," coming out next spring.) When actors would ask how their characters got into trouble, Bahrani had Szymoniak write them detailed backstories, loosely based on the experiences of other homeowners.

“The court scenes mirror what he saw,” Szymoniak said. “It’s very gratifying that we saw the rocket docket and dual tracking (when mortgage servicers simultaneously negotiate modifications with homeowners and pursue foreclosure) in the first three minutes of the film. A lot more people are going to understand that you did get 60 seconds of justice.”

Bahrani chose to make a real estate broker the villain of the film rather than a bank executive, arguing that it was the only way to get homeowners and their tormentors into the same room. Michael Shannon’s character Rick Carver snaps up homes and manages them for financial firms like Bank of America or government mortgage giants Fannie Mae and Freddie Mac. And he commits small-time scams to stay ahead, from manipulating the “cash for keys” program to acquire homes or unbolting air conditioners and charging the bank to re-install them. He teaches Dennis Nash his unseemly methods, which can be lucrative but emotionally searing.

But Shannon also gives this corrupt profiteer a soul, muddying the good-versus-evil dynamic. In a memorable speech, Carver says that he got into his business to put people into homes, not take them out. When greedy banks and an inattentive government created the bubble and the crash, he had to adapt. “I have two daughters, I wasn’t going to let them live in some hotel,” Carver thunders. “America doesn’t bail out losers, America was built by bailing out winners.” By the end you may not agree with Carver’s methods, but you understand his worldview, the same one that Nash must grapple with.

“As Michael Shannon says, the real devil is the system that created him,” Ramin Bahrani said. “When the Libor scandal hit and banks were fined billions, they still made ten-fold more and nobody went to jail. When figures run the biggest for-profit banks involved in this corruption, then go into public office, then back into the banks? You don’t need an MBA to know this system is rigged.”

Hints of the larger corruption dance around the fringes of the movie. One character is modeled after David J. Stern, Florida’s impossibly wealthy “foreclosure mill” law firm magnate whose firm handled 70,000 cases at the height of the crisis. The Stern-based character fabricates a critical mortgage document to execute a foreclosure, leading to the film’s climax. “They got an amazing amount of stuff into a non-documentary film,” said Lynn Szymoniak.

"99 Homes," whose name comes in part from the 1 percent-versus-99 percent slogan popularized by Occupy Wall Street, intends to elevate as well as inform. Through a social campaign called 99 Good Deeds, screenings of the film will coincide with efforts to raise money for services for the homeless. Bahrani mentioned that an anonymous donor gave $20,000 to Lynn Szymoniak’s anti-foreclosure non-profit, the Housing Justice Foundation, after seeing the film’s trailer. “I already feel like the movie’s done something to raise money for people who need it,” Bahrani said.

More than that, Bahrani wants the film to raise awareness of how most Americans uncomfortably sit within an unpalatable economic plight. While the tug of war between Dennis Nash and Rick Carver dominates the film, underneath it all it a sense of how unseen forces push people into impossible choices, years after the foreclosure crisis began.

Bahrani related it to the famous Elia Kazan Oscar-winner "On the Waterfront."

“That film was based on serious journalism about the corruption of longshoremen,” he said. “They drew people in with great characters and great scenes so you can say, this is an exciting film and here’s what’s behind it.” He rattled off the statistics: homeownership at nearly a 50-year low, bulk buying giving many renters a Wall Street landlord, people dropping out of the middle class and into despair every day. Finally, that unflinching reality has been preserved in celluloid.