"Stonewall" goes to Sesame Street: This ludicrous white-savior narrative fails the historic uprising on many fronts 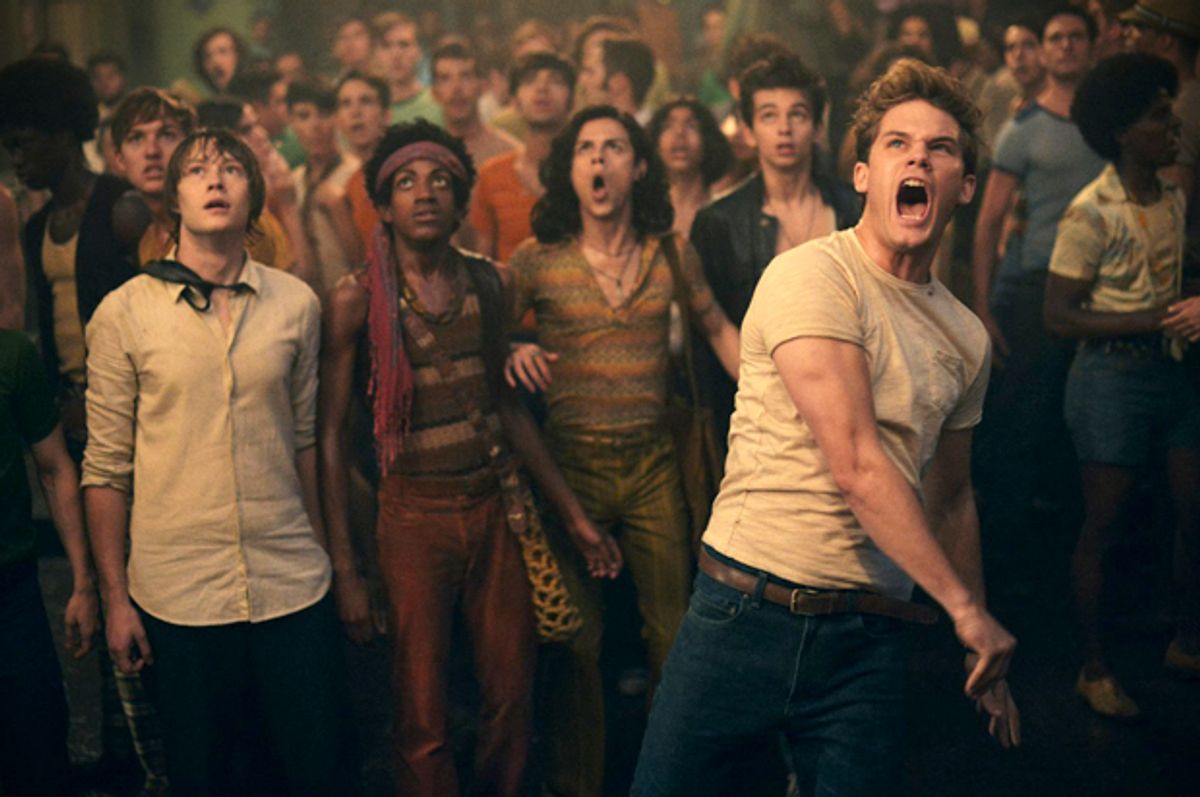 How in the name of Harvey Milk did Roland Emmerich, the German-born director of a series of diminishing-returns disaster movies from “Independence Day” to “The Day After Tomorrow” to “White House Down,” end up in charge of a semi-major historical drama about the Stonewall riots of June 1969, founding event of the contemporary LGBT movement? I think we need to file Emmerich’s “Stonewall” – a well-intentioned, profoundly silly and borderline insulting movie – under the category of Yeah That Happened or perhaps God Reminding Us We Are Idiots, and then forget it as soon as possible. Remember the Steve Jobs biopic starring Ashton Kutcher? Remember the Jimi Hendrix biopic with no actual Jimi Hendrix songs? No, you don’t, not really – and “Stonewall” will soon be consigned to that same oblivion.

First of all, Emmerich paid for much of this production out of his own pocket and he’s got plenty of dough in there. So, fine – you and I didn’t get a vote. Beyond that the only justification I can come up with is Emmerich’s oft-repeated claim that he makes “movies for the masses,” who presumably don’t know much about Stonewall or the birth of the Gay Liberation/Gay Pride movements. I’m not sure how much more they’re likely to learn from “Stonewall,” which offers a thoroughly hackneyed tale about a wounded small-town boy making his way in the big city, wrapped around a dim and abbreviated historical summary and delivered against digitally enhanced Montreal locations that vaguely resemble Greenwich Village but look more like “Sesame Street” or the credit sequence to “Welcome Back Kotter.”

As soon as Danny (Jeremy Irvine), a football coach’s son from Indiana who got caught blowing the quarterback, turns up in Manhattan in the spring of ’69, he befriends Ray and/or Ramona (Jonny Beauchamp), a transgender-ish Latino street hustler who immediately starts talking about how much s/he loves Judy Garland. (I’m not trying to be glib. The terminology we use for trans people today was not available in the late ‘60s, and Ray and his friends refer to themselves in different ways at different times, which strikes me as contextually accurate.) Anyway, at that point I wanted to throw up my hands, turn off the TV and go read the third “Game of Thrones” book again instead. But I wasn’t watching TV, despite the striking resemblance between “Stonewall” and a network movie of the week, circa 1989. I was sitting in a theater with a bunch of people who watch movies during the workday, and I had a certain obligation to stick it out.

It seems entirely likely that Emmerich just isn’t bright enough to see why thrusting a Judy-loving, effeminate and downright “queeny” gay man like Ray front and center so rapidly presents any sort of problem. But screenwriter Jon Robin Baitz, author of several well-regarded plays, really ought to know better. On one hand, it is inarguably true that the drag queens and transgender street sex workers of the West Village played a central role in the Stonewall uprising. They were constantly persecuted and victimized by the police, subjected to beatings or rapes by their clients with no consequences, and largely shunned by mainstream gay activists who sought “normalcy” and assimilation. As one character observes (in helpful expository mode), they literally had nothing to lose by trashing the Stonewall Inn, an infamous Mob-owned bar, or staging street battles with the corrupt local cops. It was “Gay Power” in action, angrily and forcefully demonstrated by people who seemed to have less power than virtually anyone else in American society.

But that’s no excuse for making Ray and the other casting-call characters Danny encounters on Christopher Street such a collection of dismal clichés. There is the aging queen (presented as more than slightly repulsive), the doomed junkie, the James Dean lookalike and the beatnik waif. There’s the hulking African-American trans woman, complete with outrageous slang vocabulary and two-snaps-up mannerisms that feel almost 20 years early, and the younger, gender-queer black radical (played by the charismatic Vladimir Alexis) who believes in taking what he wants. Baitz labors to give each of these characters a distinctive moment, but it feels way too much like a theatrical exercise, meant to convey such radical notions as “Homosexuals aren’t all the same” or “Beneath it all, we’re always looking for love.”

There’s also more than a little of the “Mississippi Burning” white-savior problem in “Stonewall,” which feels both excessively calculated and way too dumb to be effective. Danny isn’t a straight white man, obviously, although we see almost no evidence of him having sex with other guys and enjoying it. But as everyone on Christopher Street reminds him in virtually every scene, he is “straight-looking” and “straight-acting” and “wholesome,” and those are rare and valuable commodities in the street trade. Danny is unquestionably meant as our “normal” guide to this freaky world; based on the handful of occasions we see him turn tricks, it would seem that receiving a blow job from an obese businessman wearing a 1920s sheath dress is the most traumatic fate that could possibly befall a Hoosier farm boy.

But I’m not arguing that the fundamental problems of “Stonewall” are about representation, although there will be no shortage of complaints on that score. Those issues are the byproducts of the film’s essential stupidity and dramatic incompetence, rather than their cause. Emmerich and Baitz focus on some of the immediate issues surrounding the Stonewall uprising, including the homophobic brutality of the NYPD, the Mafia’s control of the entire gay bar scene and the political divisions within the gay community. (The Mattachine Society, the biggest gay-rights group of that era, insisted its activists wear suits and ties while passing out leaflets.)

But Stonewall did not happen inside some gay Manhattan vacuum, and “Stonewall” offers almost no sense of any larger social or political context. It was a year after the assassinations of Martin Luther King Jr. and Robert F. Kennedy, and the “police riot” outside the Democratic convention in Chicago. Second-wave feminism was emerging as a potent, consciousness-shifting force. The unifying idealism of the civil rights movement had given way to the charismatic radicalism of the Black Panther Party. The Vietnam War was at its height, and the American public had grown bitterly divided over that conflict and everything it represented. Danny remarks at one point that if he hadn’t come to the Village to be gay he might have enlisted and shipped out to Vietnam, but beyond that none of those issues is ever mentioned.

OK, you can start to construct a tissue-paper argument that Baitz and Emmerich are not obliged to deliver some grandiose history lesson about 1969, and that they’re paying tribute to a small group of marginalized and reviled gay men, lesbians and trans people who stood up for themselves in the face of intolerable oppression and started a revolution. Which is awesome, or would be if they had made a better damn movie. To pretend that the Stonewall uprising reflected no political consciousness, and no sense of the historical moment, does that fearless, reckless resistance movement no favors. It’s like saying that Rosa Parks was a tired lady who decided she’d rather rest her feet. But seriously, the process of forgetting “Stonewall” begins now, and the erasure will be total. Stonewall itself will be remembered for centuries.