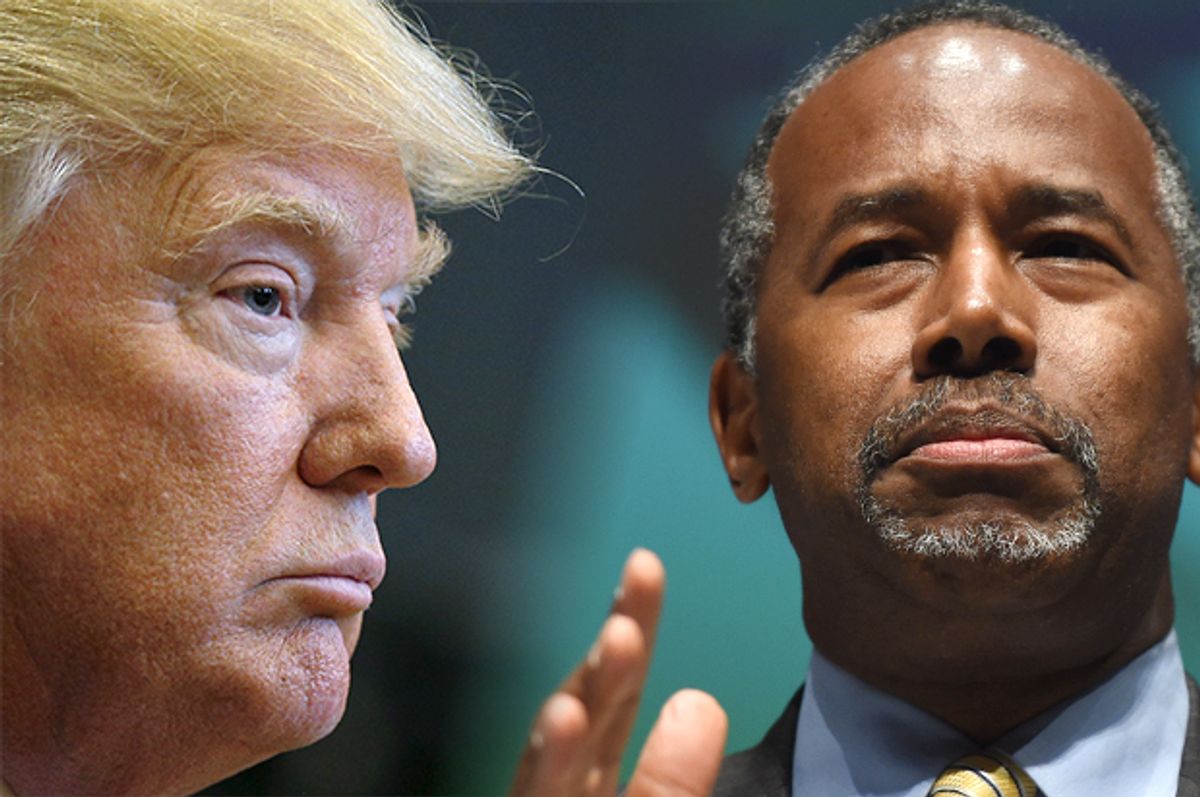 Donald Trump has made it a habit to never apologize for any of his bluster and offensive rhetoric on the campaign trail (most recently, refusing to be held responsible for not correcting a supporter who incorrectly presumed President Obama is a Muslim), while runner-up Republican favorite Ben Carson has inartfully defended his admission that he'd never support a Muslim for president, despite criticism from other Republican candidates.

But it appears as though both conservative newbies are basing their resistance against widespread backlash on a targeted understanding of the extreme right-wing Iowa electorate they are catering to, according to a new poll that shows that 30 percent of Republican voters in the Hawkeye State think Islam should be outlawed altogether.

“I would not advocate that we put a Muslim in charge of this nation,” Carson admitted recently on NBC’s “Meet the Press,” setting off a firestorm over the suggestion of an unconstitutional religious test for office.

"We don't put people at the head of our country whose faith might interfere with them carrying out the duties of the Constitution," the retired neurosurgeon explained to Fox News' Sean Hannity as he defended his comments while simultaneously recalibrating his language -- to suggest that he'd be OK with a Muslim, as long as he or she ... rejected Islam: "If someone has a Muslim background and they're willing to reject those tenets and to accept the way of life that we have and clearly will swear to place our Constitution above their religion ... I would then be quite willing to support them."

Carson campaign manager Barry Bennett told The Associated Press on Monday that his campaign was not concerned with growing backlash on his comments, citing conservative opinions on Muslims in America. "While the left wing is huffing and puffing over it, Republican primary voters are with us at least 80-20," Bennett noted.

"People in Iowa particularly, are like, 'Yeah! We're not going to vote for a Muslim either," Bennett said. "I don't mind the hubbub. It's not hurting us, that's for sure."

The Public Policy Polling survey of Iowans -- taken over the weekend -- found that only 49 percent of GOPers in the state think the religion itself should be legal,  while 30 percent of Republican caucusgoers said Islam should be illegal and another 21 percent were unsure.

In the poll, nearly 70 percent of Iowa Republicans agreed with Trump's assessment that "President Obama is waging a war on Christianity."