The GOP's absurd anti-Pope crusade: The bizarre spectacle of Republicans turning on a religious leader 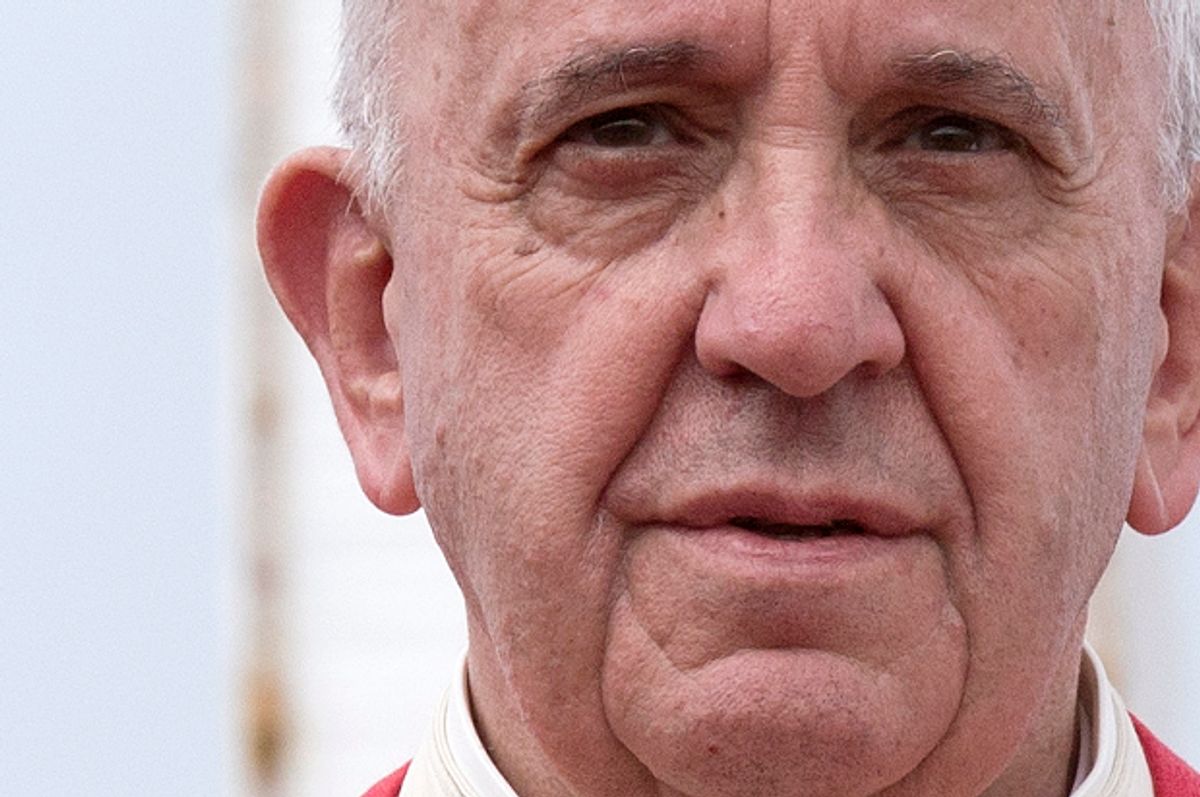 Faced with the distinct possibility that the man who is currently the world’s most beloved and respected moral authority will publicly shred their governing ideology and rebuke their position on issues from immigration to climate change, conservatives are responding by having a complete meltdown over Pope Francis’ impending visit.

In the equivalent of putting your fingers in your ears and singing “La! La! La!”

Republican Catholic Congressman Paul Gosar announced that he will boycott Pope Francis’ Thursday speech to Congress because the pope may talk about climate change. As he writes in Time, he was super psyched to hear Francis talk about the persecution of Christian minorities in the Middle East, the “enslavement, belittlement, rape and desecration of Christian women and children,” and the “condoned, subsidized, intentionally planned genocide of unborn children by Planned Parenthood.”

But, to his eternal disappointment, Francis reportedly “instead intends to focus the brunt of his speech on climate change—a climate that has been changing since first created in Genesis.” Even worse, according to Gosar, is the fact that “this climate change talk has adopted all of the socialist talking points, wrapped false science and ideology into ‘climate justice’ and is being presented to guilt people into leftist policies.”

What most disappoints Gosar is that Francis isn’t sticking to “standard Christian theology”—you know, that part of the bible where it says “thou shall not fund Planned Parenthood,” not the part that says “for the land is mine; with me you are but aliens and tenants. Throughout the land that you hold, you shall provide for the redemption of the land" (Leviticus 25:23-24). Or the part that says, “For the fate of humans and the fate of animals is the same; as one dies, so dies the other. They all have the same breath, and humans have no advantage over the animals; for all is vanity" (Ecclesiastes 3:18-22).

But Gosar’s objections seem positively statesman-like compared to the stream of anti-Francis vitriol unleashed by Washington Post columnist George Will, who accuses a man beloved for his humbleness and sincerity of “embod[ying] sanctity” but “trail[ing] clouds of sanctimony” and embracing “ideas impeccably fashionable, demonstrably false and deeply reactionary.”

On Francis’ strident warnings in his climate change encyclical Laudato si and elsewhere that we are reaching an environmental tipping point that threatens to turn the earth into “an immense pile of filth,” Wills offers post-Dickens improvements in London’s air quality as an example of human environmental restoration to counter Francis’ “rhetorical exhibitionism” (up next, welfare reform and Oliver Twist).

Like other conservatives climate change deniers, the bone of Wills’ contention is that Francis is attempting to pronounce certainty on scientific issues that are outside of the church’s purview and that his prescriptions threaten to impinge on free-market capitalism, which is the best way to lift the poor out of poverty. But what sets his denouncement apart is its echoing of the caustic tone of fringe Francis critics like Maureen Mullarkey, a commentator for the far-right Catholic journal First Things, who earlier this year called Francis “an ideologue and a meddlesome egoist” (and whom Gosar also quotes favorably).

Will charges that Francis “deplores compulsive consumerism” but “leaves the Vatican to jet around praising subsistence farming, a romance best enjoyed from 30,000 feet above” and accuses the pope of “fact-free flamboyance” and “jauntily” making his religion “congruent with the secular religion of ‘sustainability’.”

What Will and Gosar have in common with other conservative critics of Francis is their assertion that it’s fine for the pope to be politically involved in issues that top their agenda, such as banning abortion or fighting the legalization of same-sex marriage, but not OK for the pope to be involved in progressive political issues, especially those that undermine the fundamentals of libertarian capitalism. Then the church is being “political” and can be ignored; apparently it’s just a matter of whose politics you are promoting. “[W]hen the Pope chooses to act and talk like a leftist politician, then he can expect to be treated like one,” writes Gosar to justify his decision to snub the pope.

At the root of the venom directed against Francis is the fear that he will decouple the carefully cultivated alliance between free-market, anti-government conservatives here in the U.S. and the leadership of the Catholic Church, which for decades has assured Catholics that they could merrily back anti-redistributive, anti-environmental, and anti-labor policies as long as they opposed abortion. The removal of the anti-abortion trump card is an existential threat to the existing political alignment and the free reign of the free market. As Mullarkey warns, the “endgame” of Francis’ view is a “transfer of wealth”—and that’s an endgame that conservatives can’t tolerate, even if a comes from a leader they once considered infallible.

Patricia Miller is the author of “Good Catholics: The Battle Over Abortion in the Catholic Church.” Her work on politics, sex and religion has appeared in the Atlantic, the Nation, Huffington Post, and Ms. Magazine.