Ben Folds reaches for a new classic: "This is how you make something you haven’t heard before" 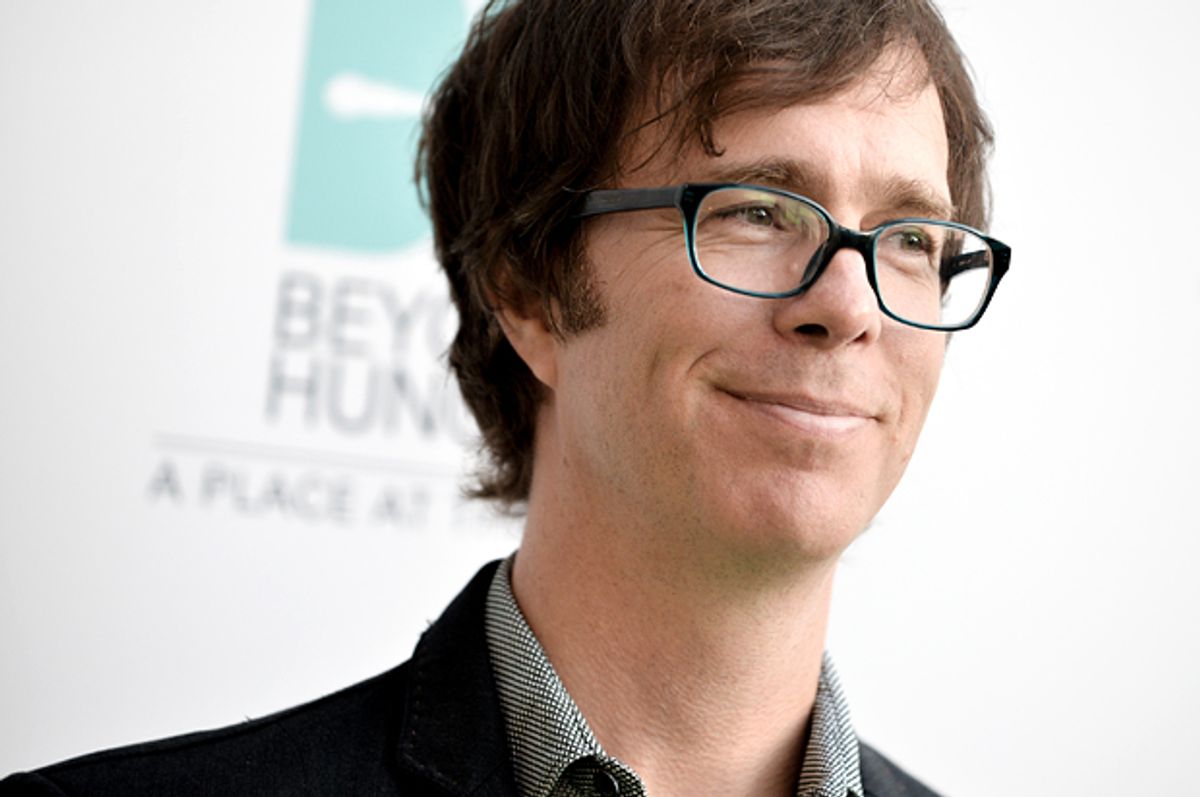 He’s best known for the piano-driven trio songs he turned out with the Ben Folds Five, but Folds has been all over the map. Since releasing his first album 20 years ago, he’s collaborated with William Shatner, written songs with Nick Hornby, produced an Amanda Palmer album, and, for years, helped judge an a cappella contest.

Folds’ latest excursion is a new album, “So There,” made up of eight chamber-rock songs and a three-movement concerto for piano and orchestra. The New York-based sextet yMusic, which has also played with Dirty Projectors and Jose Gonzalez, accompanies Folds on the first batch; the Nashville Symphony Orchestra plays with Folds on the concerto.

We spoke to Folds from his adopted hometown of Nashville. The interview has been lightly edited for clarity.

Let’s start with the chamber pop side: Did this come from your passion for chamber music – Schubert, Ravel, and so on – or for earlier chamber pop, like Love and other ‘60s bands, and successors like Belle & Sebastian? The rock side as opposed to the classical side.

All the music you said is all stuff I think is great.

There’s a major musical limitation – I don’t mean it in a bad way; I think musical limitations are good – in the approach that we took: There’s no bass. That’s something that would be unusual in both the genres you just said. An instrument that gives you a bassline, when you’re learning music theory, that’s essential to how you anchor things.

To me, as a nerd, that separates this from both genres. Basically, I made something with what I had. And what I had was a sextet of three strings and three winds; yMusic is an odd configuration. Every time we added bass, suddenly it sounded like a rock band and strings – we put the “and strings” in quotes. And this wasn’t gonna be an “and strings” record if we could help it. We did add some drums; they’re very minimal. Just a little shot.

This is how you make something you haven’t heard before. With the Ben Folds Five, we just took the guitar out of the equation, so that kind of approach isn’t unusual for me.

Why did you pick yMusic to be part of the chamber pieces?

One is they are amazing – not just sort of amazing, they’re outstanding. Each of them individually would be principals in any great orchestra. They’re just the best.

The other thing is that they’re like-minded. We were best friends immediately, and have been for the last year. It’s easy in the right ways. They’ve pushed me musically and vice versa. But it’s been a no-drama kind of creative [partnership.] We just flew through those arrangements and recordings.

I’d think that even for someone whose been writing and playing music for a long time, a concerto would be daunting.

It is [daunting]. I mean, a massive piece of music where you have to develop something for so long, would be difficult for any era. But for our era of attention spans, it’s hard. You know, I tried to quit a couple times…

But the collective music world never suggested I dumb anything down. What I’m being rewarded for was for following my heart. That’s a very interesting thing for me. Because when you make something like what I’ve made, it’s gonna meet a lot of resistance. When you’re younger, and more aggressive, the resistance is about trying to get you to shut up. No one has made anything unique and hasn’t had a lot of that.

Three, five years ago, I would not have gotten the budget to do this kind of stuff.

I wouldn’t ever have called it a concerto but it was commissioned as such. So I did what musicians have done for thousands of years… Let’s suppose you’re a kappelmeister in Vienna, you’re just conducting the choir and writing some arrangements. Rich dude says, "I need three pieces, string quartets, for my daughter’s wedding – Can you write that shit?”

And you say, Okay, It’s what I’m asked to do, I guess I’ll do it, could be Mozart, could be Handel, you’re listening to this years later, and you imagine he was tugging on his white wig somewhere and going crazy. But that’s not the way it was.

I like that [commission] approach… When I finished the piano concerto, [we wanted to perform it], and it sold out three concerts – that’s 9,000 tickets, just to see a piano concerto.

Are you saying that taste is becoming more eclectic? Or is it because the classical music world is spending money again? What made this hybrid possible?

You’ve hit on two of them. Classical/orchestral music, that part of the fine arts, they’re looking to survive. They’re more likely to reach out to somebody they wouldn’t have touched with a 10-foot-pole 20 years ago.

The cool thing is that while they were handing out commission food stamps, I came up with a lot of melodies. I’ve kind of got a composer’s mind – I’m constantly coming up with melodies and developing melodies in my head. Even though I haven’t done that in this way [until now.]

This doesn’t come from any modern-family classical family tree…. The people who’ve been really effusive about the concerto have been the rock audience. They don’t know that I’m not supposed to do [this.] I’m making music for human beings.

It sold a shit-ton of tickets; that’s not normal… Something cool is going on there.

One way to write this piece of is to say, “Ah, it sounds like a movie soundtrack.” This piece doesn’t sound to me like a score. The reason my songs aren’t in movies very much is they’re too specific – they disturb the plot too much. If you have too much of a melody, you’re kind of out of movie-scoring.

I love Ravel; there’s Ravel all over the thing. There’s Rachmaninoff moments.

How far back does your interest in classical music go? You must’ve studied it growing up. Who were the people who struck you first, and who do you still listen to?

When I was a kid, I liked Chopin, Dvorak, Bartok, Prokofiev. And that’s kinda still it. When it goes too far back, I don’t know… there are exceptions like Beethoven. But early stuff doesn’t make me so happy. I listen to it and I can’t tell the difference between it…. It’s not modern enough for my ear.

[As a kid] I was a percussionist, I liked anything with drums in it. I liked the play the “1812 Overture” because I got to get the bass drums and beat the sh*t out of them like they were cannons.

What are you hearing from rock fans, young people who’ve never liked classical music before, about the concerto?

What I’m hearing from them is that they’re moved, that they listen to it over and over again. That’s really all I can ask for.

I always beg the audiences to try to find the thread between what I’m doing and the great composers and go back – go back and [listen to] Tchaikovsky or Rachmaninoff of Shostakovich or something that you might be able to relate to. Because I do.

That would be a great consolation prize if the [concerto] proves to be just some lightweight shit that happened. You never know. It feels real to me.