Colbert didn't eviscerate Trump — but he didn't have to: The "Late Show" host knows great sketch material when he sees it 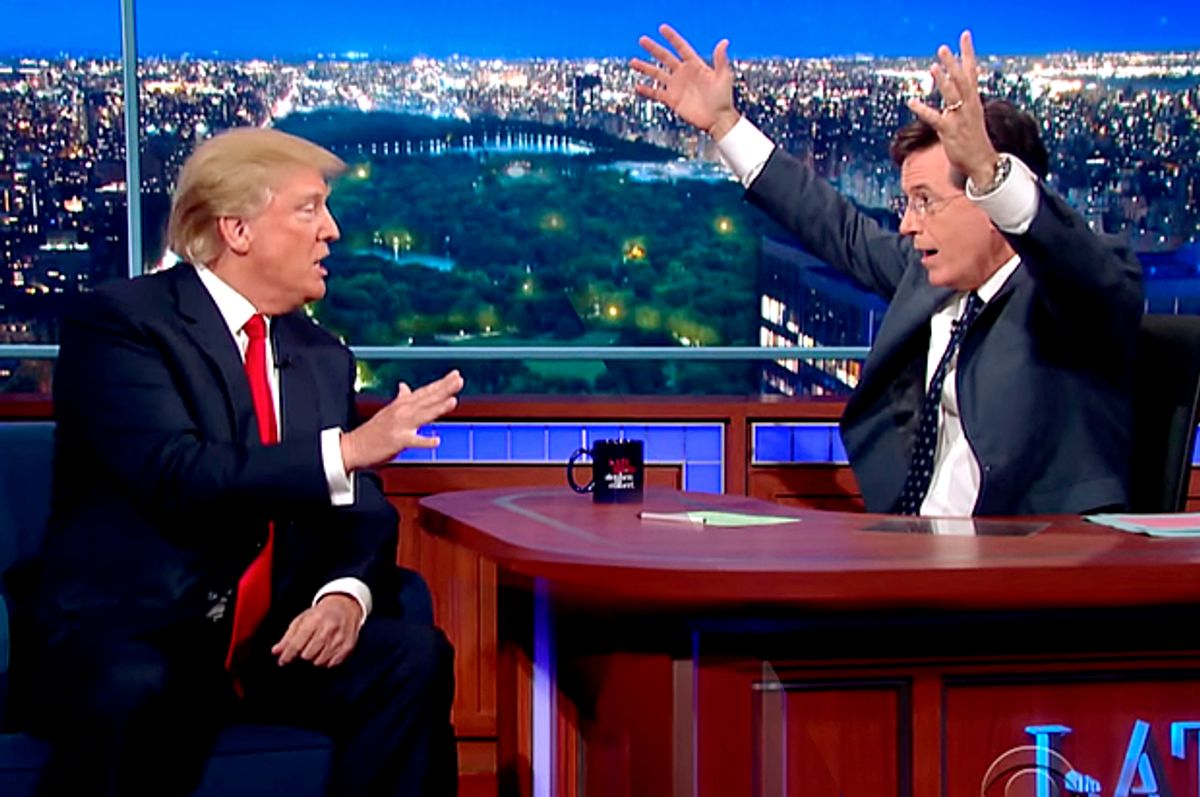 Even Stephen Colbert seemed kind of surprised to have Donald Trump as a guest on “The Late Show.” His tenure in the chair that used to be David Letterman’s had stretched all of 10 episodes before he booked presidential candidate Trump—the theatrical, showy blowhard that is currently the GOP frontrunner, in case you’ve been living under a rock for the last year. It wasn’t quite fair. Colbert’s new to this non-persona life, after the near-decade of “The Colbert Report,” and Donald Trump is the final boss of political interviews. Donald Trump, presidential candidate, only enters spaces he knows he can win; the guest’s seat under bright studio lights and a live audience is one of them.

Indeed, in the first few minutes of Trump’s interview, I found myself realizing why people have become enamored of him, his contradictory and reprehensible views be damned. Trump has a completely different level of confidence and ease in the public eye than any of the other Republican candidates that have wormed their way onto talk shows; he has nothing at all to lose. He is an out-of-touch crank at Thanksgiving dinner who has accidentally alighted onto a few topics that seem to resonate with his listeners, and the validation is intoxicating.

Colbert is a smart man, and a funny one, too. He’s not a journalist. A lot of people were disappointed with his interview of Trump last night, that’s fair: It would be quite the fulfillment of thwarted liberal fantasy if the Stephen Colbert who sang us to sleep every night on Comedy Central, with a bald eagle perched on his shoulder, would eviscerate the man that embodies the most ridiculous and horrible aspects of the Republican party (xenophobia, blind patriotism, and very deep pockets).

But Colbert isn’t a journalist, he’s a sketch comedian, and when Trump was so immovably Trump, Colbert fell into his tried-and-true persona, too. Myself, I happened to really like that persona. Colbert’s weapon isn’t investigation or blunt questioning. It’s letting ridiculous people be as fully ridiculous as possible, and then turning them over to the national audience. His entire professional philosophy hinges on letting the viewers decide for themselves what to think, because he believes in comedy doing the talking for itself. It’s a clear break from David Letterman—witness this tense interview with Trump from January 2015—but it’s the approach that made Colbert both famous and beloved.

It was very funny. Colbert as the president of Mexico made me laugh out loud, which is rare enough for late night. His faux-conservatism was able to goad Trump into saying even more ridiculous things—like a door for that great wall of Mexico, because logistics and infrastructure, those things are important. Trump supporters, who are themselves likely xenophobic and resentful of doublespeak, will undoubtedly love how comfortable Trump was onstage. What they perhaps do not realize is that Colbert would love for Trump to win the GOP nomination, so that he could be annihilated in the general; I mean, say what you will about that scenario, but surely we can all admit that it would be pretty funny.