Ted Cruz's dad is even more frightening than Ted Cruz

The wingnut didn't fall far from the tree. We followed Pastor Rafael Cruz to Iowa and heard some full-on crazy 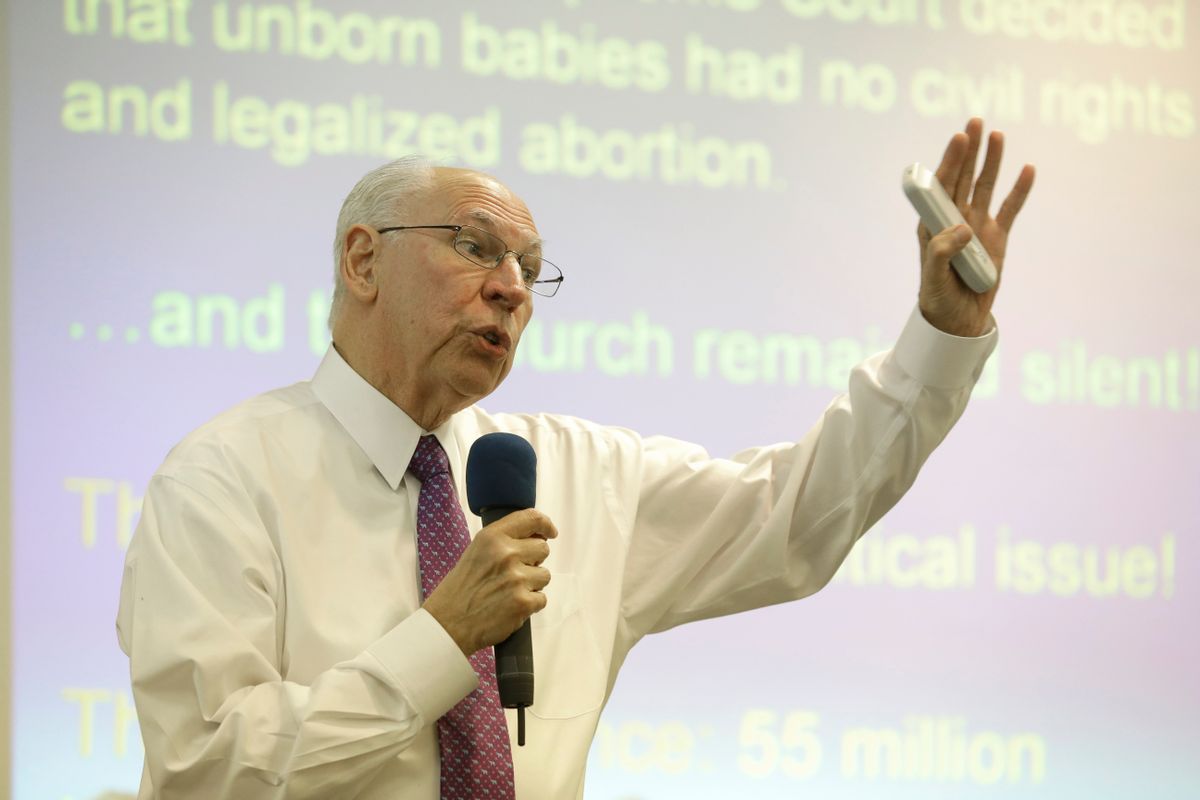 RealClearPolitics.com has Donald Trump still leading in national polling, followed by Dr. Ben Carson in second place, and Carly Florina in third. Ted Cruz is tied for fourth with Marco Rubio. While we will learn more about the strength and weaknesses of these candidates as the campaign progresses, one of them has a formidable asset in conservative circles all others lack.

Pastor Rafael Cruz, father of Ted Cruz, is a conservative, evangelical force to be reckoned with. At least that’s how it looks from my seat in the front row of the first-in-the-nation caucus state of Iowa.

I sat at a corner table when the senior Cruz spoke recently to a standing room only crowd of about 60 people at a coffee shop in Knoxville, Iowa, population 7,200 (more or less). My guess is that all were Republicans, and most, if not all, are Christians in a world where they see Christian influence waning, if not under attack. Historic and current global persecution of Christians is part of their intellectual DNA, and they take this persecution personally, despite the fact that Christians in the United States are arguably the most privileged religious group in the history of the planet.

All were white, and middle- and lower-middle-class economically. Perhaps a quarter of adults in the audience — both men and women — are veterans. Most would tell you they want less government, less meddling in their lives from Washington, D.C., and from the statehouse in Des Moines. They believe Washington has created a dependent class that is taking money from their pockets, and bleeding Americans of the will to work. They see economic reality in stereotypes; e.g., Democrats as spendthrifts and Republicans as fiscally responsible, despite lots of historical evidence to the contrary.

While most will admit privately the presidency of George W. Bush was a failure, the ideology of being conservative is bone deep. Obama is weak on terrorism and defense, Obamacare is socialism, and the world is going to hell because of liberals. Many of the folks in the audience come from humble beginnings, pulled themselves up by their clichéd bootstraps, and see themselves as successes because of the opportunities our country offered for their determination, their hard work, their family, and their faith. Their news filter is Fox News, although they might tune to MSNBC once in a while for laughs.

Cruz has instant credibility in this world, and during his speech he made them part of a compelling story where he, the audience, and his son Ted were partners on a shared journey where together they could save America from the abyss.

Born in Cuba in 1939, the 79-year-old Cruz has a story that reaffirms their own world view. He suffered beatings, torture, and imprisonment for his participation in the revolt against Cuban dictator Fulgencio Batista. He fought for Fidel Castro, and became disillusioned when he learned Castro was a communist. In 1957, at age 18, he fled Cuba with $100 sewed into his underwear to enroll as a student at the University of Texas. He received his degree in math and became a U.S. citizen in 2005.

His origin story and personal epiphany about Castro was the starting point of his speech to the crowd. And what a speech. It began quietly, and slowly raised the audience’s passion until he received a standing ovation at the end. Like some of the more effective church services I have attended, it was punctuated by “amens,” "yeahs,” “that’s right,” and other exultations by the audience. The main themes? There were two. To borrow a phrase from Hunter Thompson — Fear and loathing.

To Cruz, there are many things to fear, and many people to loathe. And he was masterful at getting us to make the connection, and used thoughtful and well-researched historical anecdotes punctuated with Bible verses, hyperbole, and passionate exaggeration sprinkled with the truth to make his points.

He began with a reference to a charismatic leader from his youth, who spoke of hope and change and who appealed to the younger Cuban generation, only to eventually betray them and their country. He repeated the phrase “hope and change” so often I could see the iconic 2008 Obama "Hope" poster transformed in my mind’s eye to an image where Obama’s portrait was replaced with one of a cigar smoking Castro.

Equating Obama and Castro drew applause from the audience—it doesn’t matter that Castro’s actual slogan and motto of the Cuban Revolution was Patria o Muerte (Homeland or Death), as it set the stage for not only fearing Obama but also loathing him as much as one might a communist dictator.

And why not, as Cruz believes that Obama is a communist who wants to turn our nation into a communist one? There is plenty of fear and loathing for Hillary Clinton as well, and here I’m going to quote Cruz directly.

Cruz regularly reminded his audience that he and they are victims. To Cruz, and to many in his audience, Christianity is under attack from a variety of fronts.

Even when Obama talks about his support for the freedom of worship, Cruz sees it as a repudiation of Christianity.

Cruz’s reference to Obama saying this is not a Christian nation probably refers to a 2006 speech Obama gave regarding the plurality of religions in America. Many other Christians have also interpreted Obama’s remarks in a manner similar to Cruz.

The nonpartisan, nonprofit FactCheck.org presents Obama’s prepared remarks, and what was actually said.

Here are his prepared remarks:

Obama, June 28, 2006 (as prepared): Given the increasing diversity of America's population, the dangers of sectarianism have never been greater. Whatever we once were, we are no longer just a Christian nation; we are also a Jewish nation, a Muslim nation, a Buddhist nation, a Hindu nation, and a nation of nonbelievers.

Here is what he actually said, where he stumbles a bit:

Obama, June 28, 2006 (as delivered): Whatever we once were, we are no longer a Christian nation – at least, not just. We are also a Jewish nation, a Muslim nation, a Buddhist nation, and a Hindu nation, and a nation of nonbelievers.

True enough. There are more faiths than Christianity in America.

So what bothers many Christians about this statement? Perhaps because they don’t like the fact that not all Americans are Christians? I doubt this, as most of my most devout Christian friends seem to welcome those of other faiths.

Why the anger? Perhaps it is because to Cruz and other critics the statement seems dismissive of the influence Christianity had in the formation of our nation. Most of the founding fathers were Christian, although many were influenced by the deism popular at the time. So yes, Cruz is correct, this country was founded by Christians, but needs the addendum that not all were Christians. But was the country founded as a Christian nation as he suggests? That too is open to interpretation since it is impossible to get into the heads of the founding fathers, but if one looks to our founding document, the Constitution, there is no mention of Christianity in it, there is no mention of Jesus; indeed, there is no mention of God. The constitution is a secular document.

These facts aside, Cruz painted a moving portrait of our founding fathers as Christians. While we are all accustomed to our religious leaders, lay experts, and even neighbors cherry-picking the Bible to support their positions, Cruz evidently uses skills he acquired in theology class to cherry-pick our history as well. Listening to Cruz, it’s almost as if the deist Thomas Jefferson was an early day Billy Graham or Rick Warren, and nearly every battle was fought in the front yard of Christian Churches only by members of the congregation. Of course, since even a side reference to the considerable literature of the role of Jews in the Revolutionary War would distract from his point, no wonder it was left out.

Bottom line, Cruz’s intent was to illustrate his thesis that “the separation of Church and State is a myth.”

Irrespective of Cruz’s historical revisionism—the crowd loved it. Of course, to give Cruz credit, it was a political speech designed to move the audience the way he wanted it to move, not a classroom history lesson.

The Wall Street Journal and others have expressed the opinion that Pastor Cruz’s Bible-laced speeches could alienate swing voters. I doubt it. Most swing voters that would be alienated by the senior Cruz have already been alienated by his son Ted. I also think that the Cruz campaign could care less about swing voters right now. All they care about is the caucuses and primaries. Ted can always distance himself from his father in 2016—but he needs to rally his base now.

Pastor Cruz was up front that Ted’s campaign could care less about the general election right now. And here he shows considerable loathing for Republicans as well.

Cruz believes that middle-of-the-road candidates discourage the base from coming out, and thereby keeping Republicans from winning. He put it this way:

“In 2012, 12 million evangelicals were not registered…40% of evangelicals and Catholics didn't vote… If we don't vote, we get what we deserve…Don't blame God for putting Obama in power. We were sitting in our pews singing hallelujah while the country was going down the drain, or if we are sitting on our couches watching the idiot box instead of getting involved in the political process it becomes our fault…”

Of course, Pastor Cruz believes his son Ted is the conservative leader who can lead our country to greatness, that all conservatives can rally around. That Ted is on the right side of the political spectrum rather than closer to the center is seen as a positive, not a negative.

“Reagan didn't run being just a little to the right of Carter. He ran as the opposite…Reagan was seen by the establishment as non-electable. He not only won, he won by a landslide twice. The man for principled conservatives to coalesce around now—that man is Ted Cruz. Let us all come together and make America again that shining city on a hill to the glory of God.”

Near the end of the question and answer session, Pastor Cruz walked up to a boy, maybe eight to ten years old, who was seated at a table.

What is your name?” he asked, hands folded, looking down at the boy.

"I'm so glad you are here… Let me tell you Thaddeus, I don't want to shock you, but let me tell you something. We are fighting for your future (amens came from the crowd), and if we lose, you will not have a future. Do you understand what I am saying?”

Thaddeus gulped and nodded. Cruz looked up to the rest of the audience, opening his arms wide.

“We are fighting for the future of our children, and our grandchildren. That is why we cannot lose this fight. It is their future that is at stake, because the way this country is going, if we don't change it, they will not have a future. If things continue the way they have someday we will be sitting and telling our children and grandchildren about back when America was free. I'm not willing to have that conversation.”