"black-ish" tackles the "n-word": Why last night's show shuts down all the "but why can't I say it?" trolls

Compared to its time-slot rival, the political plotline on "Empire" was a total shambles 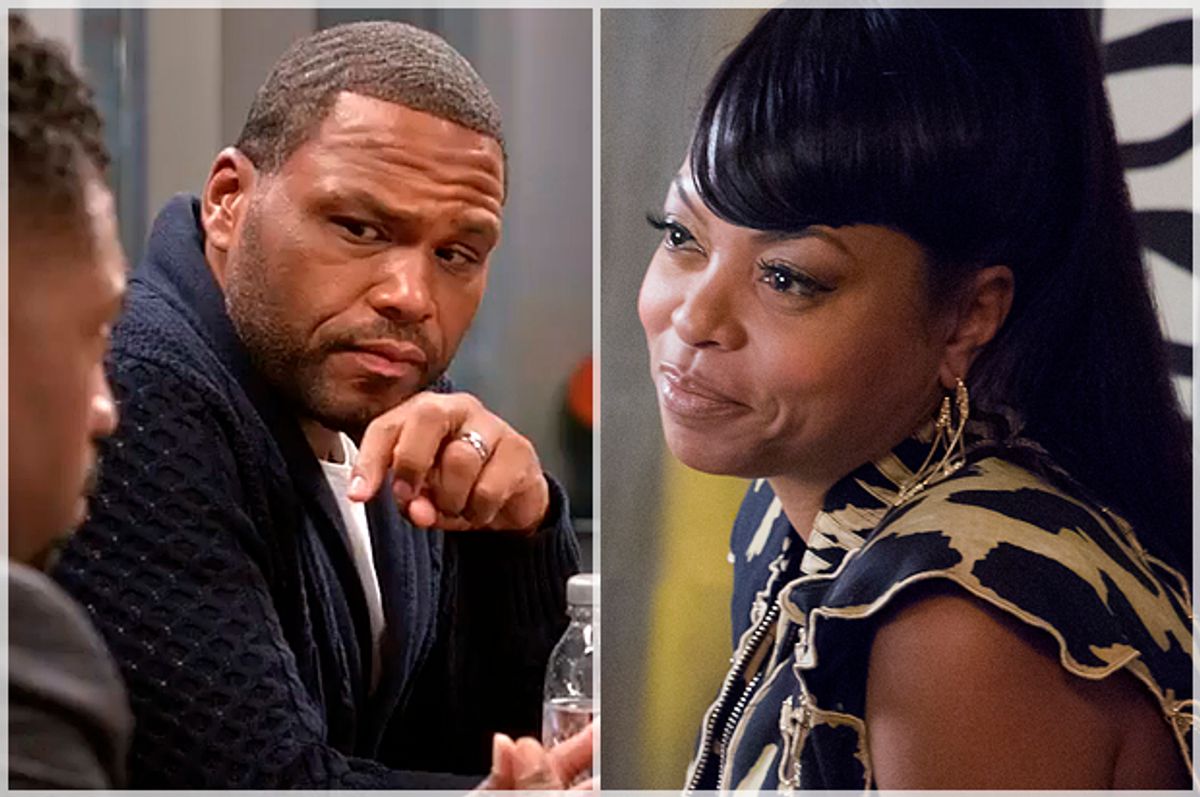 Last night, America had a choice it has not had too often in the last few decades—two shows about two black families, airing directly opposite each other. On Fox, Wednesdays at 9 p.m., is last spring’s smash hit “Empire,” a hip-hop inflected primetime soap opera. On ABC at 9:30 p.m. is “black-ish,” a streamlined, contemporary sitcom about a black family trying to hold onto their identity in an affluent suburb of Los Angeles. They’re very different families, and very different shows. But because both feature black families—and because both were critical hits, nabbing Emmy nominations for performers Taraji P. Henson and Anthony Anderson, respectively— in the eyes of the networks, at least, they’re competing for the same audience in the same hour, forcing the choice of which one you’ll watch live (if either) and which you’ll catch up with on DVR, or on Hulu. On one hand, it’s nice to see networks finally clue into the fact that the “ethnic” audience is one they want; on the other, it’s galling that of the very few black families on television, the two most prominent are forced to compete with each other for attention.

Especially because “Empire” and “black-ish” are such different programs, at the end of the day. Yes, they are both about black people and black culture, and as such, they are both inherently political—last night’s season-two premieres both dealt with the politics of blackness, for example. But they approached and handled their politics in vastly different ways, and perhaps more relevantly to me, both programs pulled off far different degrees of quality. “black-ish” aired what I think is its best episode yet. “Empire” aired what I think might be its worst.

In the “Empire” premiere, we open on record mogul Lucious Lyon (Terrence Howard) in prison for a murder he committed in the premiere of the first season. It’s a prison populated largely by black inmates, including guest star Chris Rock as a vicious (and decapitating!) rival. But it’s also a weirdly plush prison—Lucious has a flat-screen television that he can apparently use to Skype in to board meetings, because naturally the correctional facility has high-quality wifi. Naturally, I do not come to “Empire” for verisimilitude (or even coherence); this is a show built for moment-to-moment glee, not after-the-fact reflection. But it is odd that Cookie (Henson)’s prison from season one looked and felt so grim and horrific, while Lucious’ looks like a day-spa with weird uniforms.

Especially because the opening scene is a concert being put on to protest Lucious’ unjust incarceration—lumping it in with several veiled references to the Black Lives Matter movement. “How much longer?” chants the crowd, as Jamal (Jussie Smollett) and Hakeem (Bryshere Y. Gray) perform a number that makes use of the phrase “no justice, no peace.” Then a gorilla (!) in a cage (!!) drops from high above (!!!), and after beating at the bars of the cage for a bit, the gorilla takes off its mask to reveal Cookie in feathered and fishnetted Gucci, exhorting the crowd to take action against incarceration.

It’s spectacle, absolutely. But denoting what? That the perceived gorilla is really a human being, sure. But also that the event for freeing Lucious has something to do with disproportionate incarceration—even though his family knows he’s guilty. Lucious is not a disenfranchised black man targeted by police violence; he one of the richest men in America, in prison for a crime he really committed. It’s hard to see the connections that “Empire” is trying to draw, and that’s because the show isn’t trying that hard to make them clear. Black Lives Matter is brought in as a prop, poorly used, and then quickly discarded, along with the dozen or so celebrity cameos (Al Sharpton, Andre Leon Talley, Swizz Beatz, and more). My former colleague Joshua Alston said “the entire premise of the scene is profoundly disgusting,” and though I’m not entitled to go that far on the topic, I entirely agree with another point he makes: That “Empire”’s style doesn’t just trump its substance, it actually invalidates it.

Especially when compared to the incredible elegance of “black-ish”’s half-hour premiere, “The Word,” on eight-year-old Jack (Miles Brown)’s decision to perform the explicitly worded Kanye West hit “Golddigger” at his talent show. (If you’re not familiar with what’s so explicit about the song: Well, it rhymes with the title.) The mostly white audience is horrified, and because the school has a “zero-tolerance” policy—one that his mother, Bow (Tracee Ellis Ross) campaigned for and wrote herself—Jack is now facing expulsion. What follows is a rollicking half-hour of people from many walks of life discussing the legacy of all kinds of words, including “negro,” “colored,” and the n-word itself.

Andre (Anthony Anderson) begins by trying to dictate when and how the n-word can be used, but as the episode demonstrates, any kind of rule-making breaks down fast into the murky subjectivities of perceived and performed identities. Jack, the original “offender,” wants to know why he’s not allowed to say it if his father sings along to Kanye West, too, while his twin sister Diane (Marsai Martin) shakes her head and mourns his idiocy for not using the “the radio edit.” Bow tries to convince the parents at her school to rewrite the “zero-tolerance” policy to a “one-tolerance” one. And when Andre discusses the issue with his coworkers, hilarious questions follow: “So, Mexicans can’t say it, but Dominicans can?” “Yes.” Don Lemon, according to the amassed black coworkers, has no right to use the n-word. Though Charles (Deon Cole), in a moment of total sincerity, says: “Bill Clinton: Probably shouldn’t use the word. But I wouldn’t be mad if he did.” Their casually racist (and casually proud of it) boss (Peter Mackenzie) observes that “colored” is in the title of the NAACP, and “negro” for the UNCF. Dre responds caustically: “Mr. Stevens, be honest. You only wrote that check so you can say ‘negro.’” His boss pauses, and then responds, “Well, I definitely don’t do it so I can’t say it.”

Without giving away the conclusion, I’ll just say, it’s basically perfect. “The Word” is a great episode of a great show, and it’s one I want to show to everyone I’ve ever met, as well as maybe put on loop in a video I can send to every “well actually” troll that starts spouting illogic about the “double standard” of language.

It is wonderful that “Empire” and “black-ish” are offering these two distinct approaches of politicizing (or not politicizing) the black family; “Empire” showrunners Lee Daniels and Ilene Chaiken have a very different style from “black-ish”’s Kenya Barris. Both have their charms and their flaws, and the season is just starting. But despite the glitz of “Empire,” I prefer to have something to chew on after the episode is over. From now on, I know which show I’m DVRing on Wednesday nights, and which I’ll be watching live. The noise “Empire” can wait. The substance of “black-ish” really can’t.