The transcendent compassion of Pope Francis: How the pope changed the culture of Washington, for at least two days

Can the loving presence of Pope Francis heal our sick political culture? It feels that way today. Let us pray 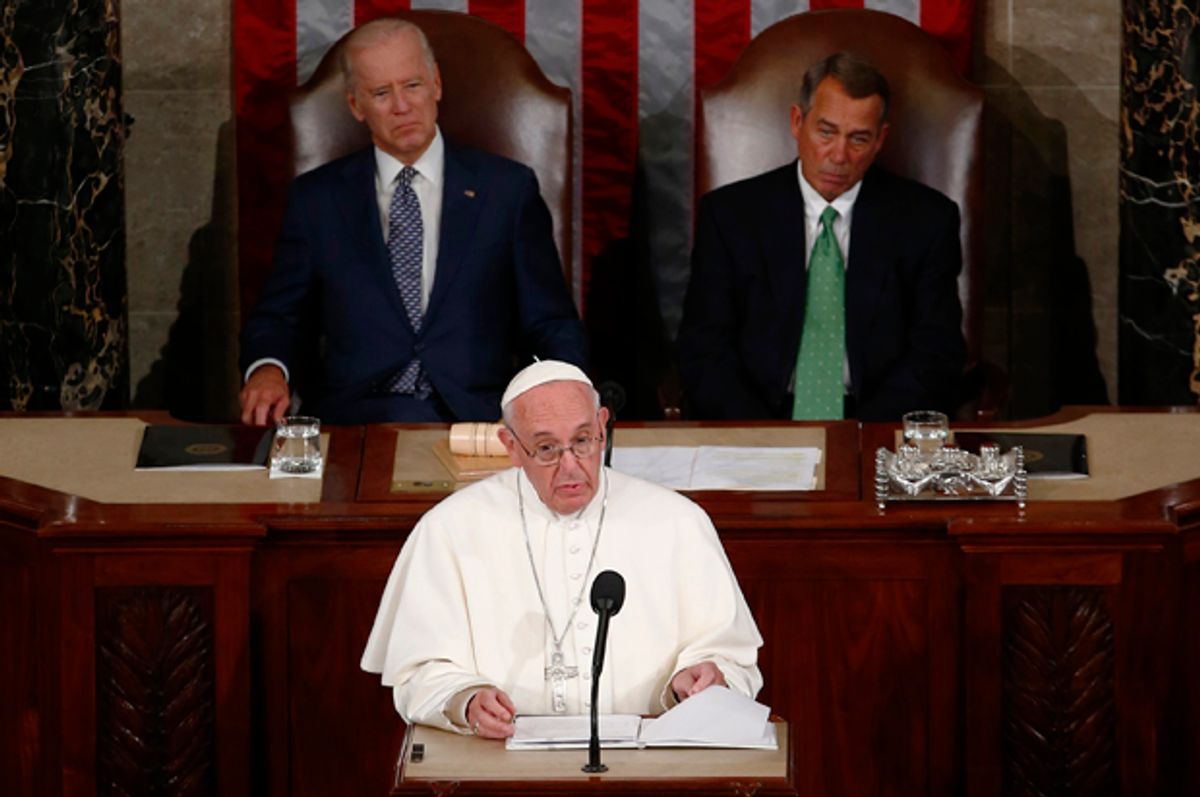 Pope Francis brought his healing ministry Thursday to a place that sorely needs it, the U.S. Congress. Miracles are possible: I have nothing critical to say about the morning. One indelible image for me was House Speaker John Boehner sitting behind the Pope struggling to control his tears, which I found incredibly moving. I wanted Vice President Joe Biden to reach over and give him a hug, and I’m sure Biden wanted to as well.

His entire speech came down to one line, for me, when he talked about immigrants and refugees: "We must view them as persons, seeing their faces and listening to their stories, trying to respond as best we can to their situation.”

It was a call not only for compassion, but for presence, which is the first step. We must see their faces.

Merton was a moving choice, a skeptic who became a devout Catholic, who blended Catholic social teaching with Eastern spirituality and linked the world’s great faiths, and its great secular strivers, in the universal search for meaning. Pope Francis is that figure in this era of Catholicism, and it was thrilling to see how clearly he embraces that role. Besides, any day we’re discussing Thomas Merton and Dorothy Day on MSNBC is a wonderful day.

I was blessed to be among the 10,000 people who greeted the Pope on the South Lawn of the White House, and it touched me beyond all expectation, in a way that had nothing to do with ideology. So in the spirit of Pope Francis I’m not going to keep score today, and tick off what ideological notes he sounded and whether Democrats or Republicans are happy today. His message deserves to be heard on its own terms, and I urge everyone to watch or at least read it in its entirety.

The pope stayed true to what has become his message, making a plea for kindness to immigrants, refugees, the poor; to “people who struggle to bring home the daily bread;” and maybe most important, kindness to what he called in his great climate change encyclical, “our sister, Mother Earth.” He called us to remember that almost all of us are “foreigners,” immigrants or the children of them, here in the Americas. When he talked about the “sanctity of life, at every stage,” he immediately called for the abolition of the death penalty. He made a searing attack on the global arms industry, denouncing its profits as “money drenched in blood.”

Most significant, he called on Congress to live up to its highest purpose. In simple prose that made me feel like he was talking gently to children, he explained their duties:

Your own responsibility as members of Congress is to enable this country, by your legislative activity, to grow as a nation. You are the face of its people, their representatives. You are called to defend and preserve the dignity of your fellow citizens in the tireless and demanding pursuit of the common good, for this is the chief aim of all politics. A political society endures when it seeks, as a vocation, to satisfy common needs by stimulating the growth of all its members, especially those in situations of greater vulnerability or risk. Legislative activity is always based on care for the people. To this you have been invited, called and convened by those who elected you.

They are such plain words, yet profound to me.

As he left the Congress, the Pope spoke not only to non-Catholics, but non-believers. Asking Americans to “pray for me,” he added, “If there are among you any who do not believe, or cannot pray, I ask you to send good wishes my way.” Then he went to lunch not with members of Congress, but homeless people at Catholic Charities. John Boehner dabbed his eyes with a handkerchief as he said goodbye.