This is why they have such hate: Coulter, Trump, Carson and the real history behind right-wing intolerance 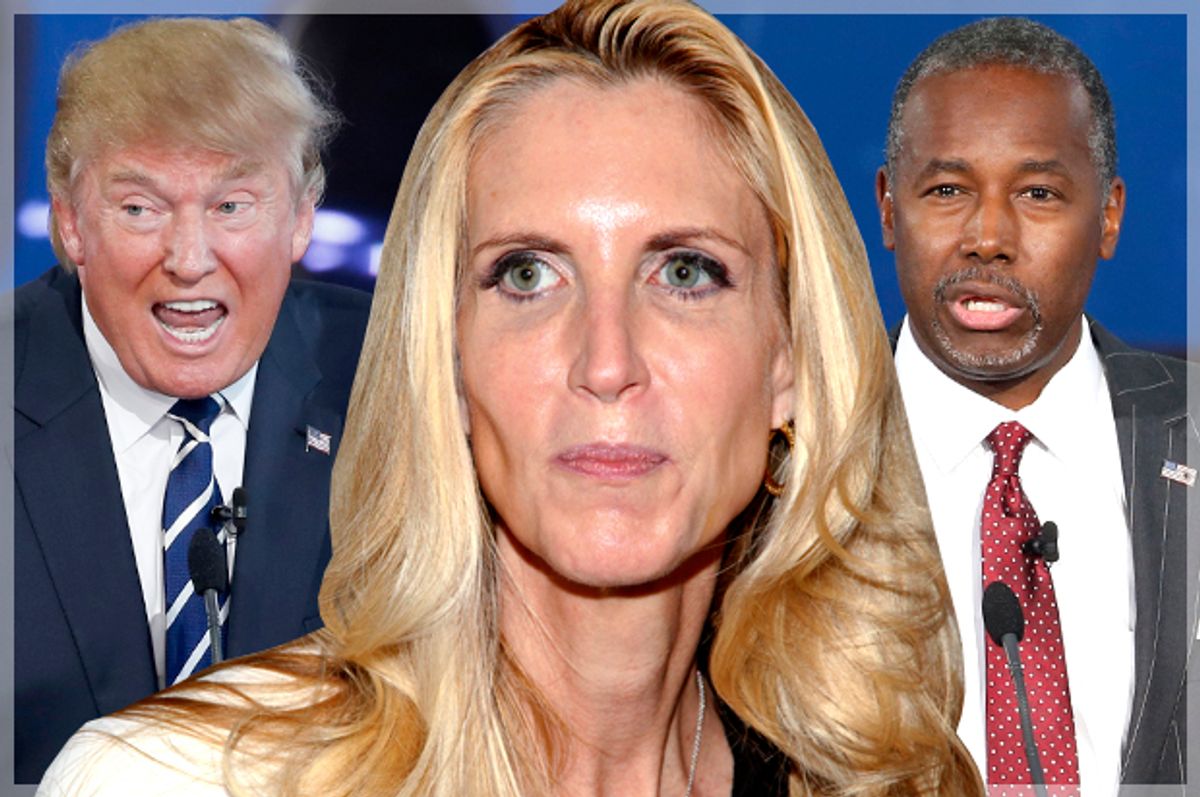 Is Ann Coulter an anti-Semite? What’s interesting to me about Coulter’s notorious tweet (“How many f---ing Jews do these people think there are in the United States?”) isn’t what it does or doesn’t reveal about her, but the light that it sheds on the deep archetypes of American conservatism.

Watching the two Republican debates, I couldn’t shake the feeling that I’d come, in Kurt Vonnegut’s phrase, “unstuck in time.” Ted Cruz looks to me like a silent movie villain from the 1920s, and he talks like a wax cylinder recording of a Texas governor from the 1920s. Jeb Bush is, well, another Bush. Mike Huckabee is a beefier, more homespun Pat Robertson. And for all that he is a product of New York real estate and reality TV, Donald Trump is the living embodiment of the rural Populism that arose in the late 19th century.

The Koch brothers might not understand why the Republican base is so willing to overlook Trump’s heresies on progressive taxation and unions (Scott Walker is even more flummoxed); the media may be scratching its collective head at his appeal to Evangelicals, but Populism wasn’t about protecting the Haves or promoting the Holy. It was driven by the certainty that you were being robbed of your money and your status in the socioeconomic hierarchy, and that your enemies were establishment politicians, the elite money powers, and the swarthy immigrants that they used as their tools. Populism is all about fear and hatred, and starting around the 1890s, when the myth of Jewish money power and the tide of Eastern European Jewish immigration were both at their peak, the fear and hatred of Jews in particular.

The so-called Jewish plot to undermine the economic and moral foundations of Christendom and rule it from Jerusalem was laid out in detail in the infamous "Protocols of the Elders of Zion," a libelous forgery that was first published in Russian in 1903 and widely translated and circulated in the 1920s, when, not coincidentally, the Nativist Ku Klux Klan was enjoying a huge revival in this country and one of America’s richest and most powerful businessmen, Henry Ford, was weighing a run for the presidency. Ford also published a newspaper, the Dearborn Independent, that was almost entirely dedicated to the “Jewish problem.”

I don’t know what’s in Ann Coulter’s heart and I haven’t heard any anti-Jewish dog whistles from Donald Trump himself, just his supporters, but when I picture her live-tweeting the debate, I can see how it might have annoyed her, just as it would have any right-winger in the heyday of Populism, that “Cruz, Huckabee, Rubio all mentioned ISRAEL in their response to: ‘What will AMERICA look like after you are president?’” as she dyspeptically put it, or that so many of the candidates as much as swore their fealty to the king of the Jews, bragging that they wouldn’t make a move in foreign policy without Bibi’s permission.

In Ann Coulter’s parents’ day, the Jews wouldn’t have gotten through the door of the Republican club. Now, as her vintage 1920s avatar might see it, the Jews own a big part of the GOP’s agenda, virtually all of the left’s, and almost everything else in between. No wonder that all that “sucking up to Israel” got her goat. (She says I’m wrong about this by the way—in this video, she insists that it isn’t the Jews she’s mad at, it’s the Republicans.)

Elizabeth Dilling, an anti-Communist crusader of the 1930s whose book "The Roosevelt Red Record and its Background" has often been compared to Ann Coulter’s "Treason," also wrote a book-length indictment of “Talmudism,” "The Plot Against Christianity." If we could bring her back today and ask her to explain how it is that Jews are so prominent on both the left and the right, she would tell us that their leaders were executing a great strategic pincer move, exactly as the Elders of Zion planned it (cf. Protocol IX, #4: “We have in our service persons of all opinions, of all doctrines, restorating monarchists, demagogues, socialists, Communists, and Utopian dreamers of every kind. We have harnessed them all to the task: Each one of them on his own account is boring away at the last remnants of authority, is striving to overthrow all established form of order”). Open your eyes and look, Dilling would say: Even as the left-wing Jewish New York Times piles on against the Republicans, Jewish billionaires like the gambling magnate Sheldon Adelson have their candidates in their pockets. It’s Christendom’s worst nightmare and the Republicans aren’t allowed to say boo about it, or even make jokes. In fact they have to pretend that they like it.

Racism runs deep in the Republican Party, as we have all learned, seven years into the presidency of Barack Obama. But the kinds of hatreds that animated Elizabeth Dilling, if not Ann Coulter, run much deeper than nasty tweets or even racial gerrymandering and voter suppression. Totalizing and metaphysical, they reflect and shape a whole worldview. If traditional racism is deeply rooted in America’s economy, geography and culture, it is more tangible and easier to measure and parse than the fixations that characterize the “Paranoid Style in American Politics,” in Richard Hofstadter’s famous coinage. Like the proverbial iceberg, a lot of those primal, capital ‘h’ Hates are hidden from view; they are buried in the collective id. And Hate has come to a crossroads.

1) Papism. Back in the 1600s, American colonists worried about Jesuit subversion. From the 1830s to the Civil War, the Know Nothing movement attacked Roman Catholic Irish and German immigration. A second great wave of anti-Catholic feeling arose during the Populist era, between the 1890s and into the 1920s (the KKK was as anti-Papist as it was anti-black and anti-Jew). For all the noise that the Catholic League’s Bill Donohue makes today, anti-Papism has virtually disappeared from all but the outermost fringes of the American political landscape since JFK was elected.

2) Atheistic intellectualism. There were McCarthy-esque witch hunts against Masonry and Illuminism in the 1790s and again in the late 1820s and ‘30s. To its historical enemies, Masonry occupied much the same space that secular humanism does today; its chief sin was that it elevated reason and science above revealed religion.

3) Calibanic Demonicism. This is my own coinage; I use it as a shorthand for what our forebears saw as the unbridled sexuality and unregenerate sinfulness of natural man, as embodied in blacks and indigenous Americans—attributes that would also be ascribed to Suffragists and to birth control advocates, both then and now (Google “Sandra Fluke” and “Rush Limbaugh” to see) and to LGBT people today. A simpler shorthand might be “sex.” Racism, of course, is about a lot more than sex, but as I said above, for most of our history it was openly and unapologetically acknowledged.

4) The Anti-Christ. This last includes Jewish bankers, Jewish arms dealers, and Jewish pornographers, which is to say Hollywood producers and popular culture purveyors, as well as the “left wing media.” International Communism falls under this rubric too—not the nation states that were pointing missiles at us during the Cold War, of course, but the specter of domestic subversion that drove the Red Scares of the teens and McCarthyism. In the classic American Paranoid understanding, Communism was fundamentally Anti-Christian and shared the same goals as the Rothschilds and their heirs.

The corporate interests and other deep pockets that have historically exerted the most power in this country, and that are the most deeply invested in the Republican Party today, have never been monolithic in their aims or beliefs; most of them were and are too cosmopolitan to give these hateful hobby horses full credence and too cautious to fully align themselves with the groups that do. But they haven’t necessarily disbelieved them either, and they’ve never stopped using them to manipulate debt-burdened dirt farmers, struggling artisans, and exploited (or nowadays discarded) factory workers to vote against their economic interests. Democrats have used some of them too, though much less so in recent decades than in the past. If Democrats were the architects and chief defenders of the Jim Crow South, that has changed, just as Republicans are no longer the most active supporters of Planned Parenthood.

The deep substructure of Hate remains pretty much as it was, but its superstructure has changed beyond recognition. Hitler made anti-Semitism disreputable, as, after much struggle, the civil rights movement did the most overt forms of racism (structural racism, of course, is a different story). Catholicism is firmly in the mainstream, but Nativism is resurgent, as Donald Trump’s continuing success daily proves. With Catholicism, anti-Semitism, and overt white supremacism off the table, Islam and Sharia have taken their place, alongside sex and anti-scientism (which never went away). Radical Islam also stands in for international Communism.

Of course it wasn’t just Hitler. Starting in the 1960s, a handful of neoconservative Zionist Jews made a tactical decision to throw in their lot with the GOP; later, they forged an even stranger alliance with apocalyptic fundamentalist Christians, whose end time prophecies require the restoration of the Jewish state. In the wake of Roe v. Wade and Stonewall, religious Catholics and Evangelicals formed alliances that would have also been unthinkable a generation before. The party of Lincoln has become the home of many neo-secessionists, who left the Democrats en masse after LBJ’s great betrayal in the 1960s, and to numerous Libertarians, who believe that all government is tyranny.

All of these people–many of whom wouldn’t have 10 words to say to each other if they had to sit next to each other on a long airplane flight–have crowded into the Republican big tent, along with the usual suspects who think that their taxes are too high and their businesses overregulated. It’s no wonder that some of them feel the need to step outside for a breath of fresh air from time to time, or to let off a little steam.

Seen in this light, it makes perfect sense that Carly Fiorina would have singled out Iran and Planned Parenthood as America’s two greatest existential threats, or that the legendary brain surgeon Ben Carson would attest to his disbelief in evolution (and that all of the candidates would dismiss the science behind climate change). It also makes sense that the three leading Republican hopefuls would have never held elective office, or that Scott Walker’s boosters saw his lack of a college degree as an asset.

As for Trump, one thinker who wouldn’t be surprised by his success is the economist F.A. Hayek, one of the GOP’s patron saints. When a minority is looking to hijack a democracy, he wrote in "The Road to Serfdom," it needs to attract a hard core of true believers. They will look to bring in comparatively less-educated people, he wrote, because “the higher the education and intelligence of individuals become, the more their views and tastes are differentiated and the less likely they are to agree on a particular hierarchy of values.” The program they will be offered, he adds, must be negative: “the hatred of an enemy…the envy of those better off….the contrast between the ‘we’ and the ‘they,’ the common fight against those outside the group, seems to be an essential ingredient in any creed which will solidly knit together a group for common action.”

And Ann Coulter? She’s just feeling a little cranky is all. “Republicans all agree 100 percent that we are pro-Israel, pro-Life, pro-gun,” she protested. “So why do we spend so much time on these issues?”