While Kim Davis continues to rave about exercising her faith, people of color are targeted for theirs 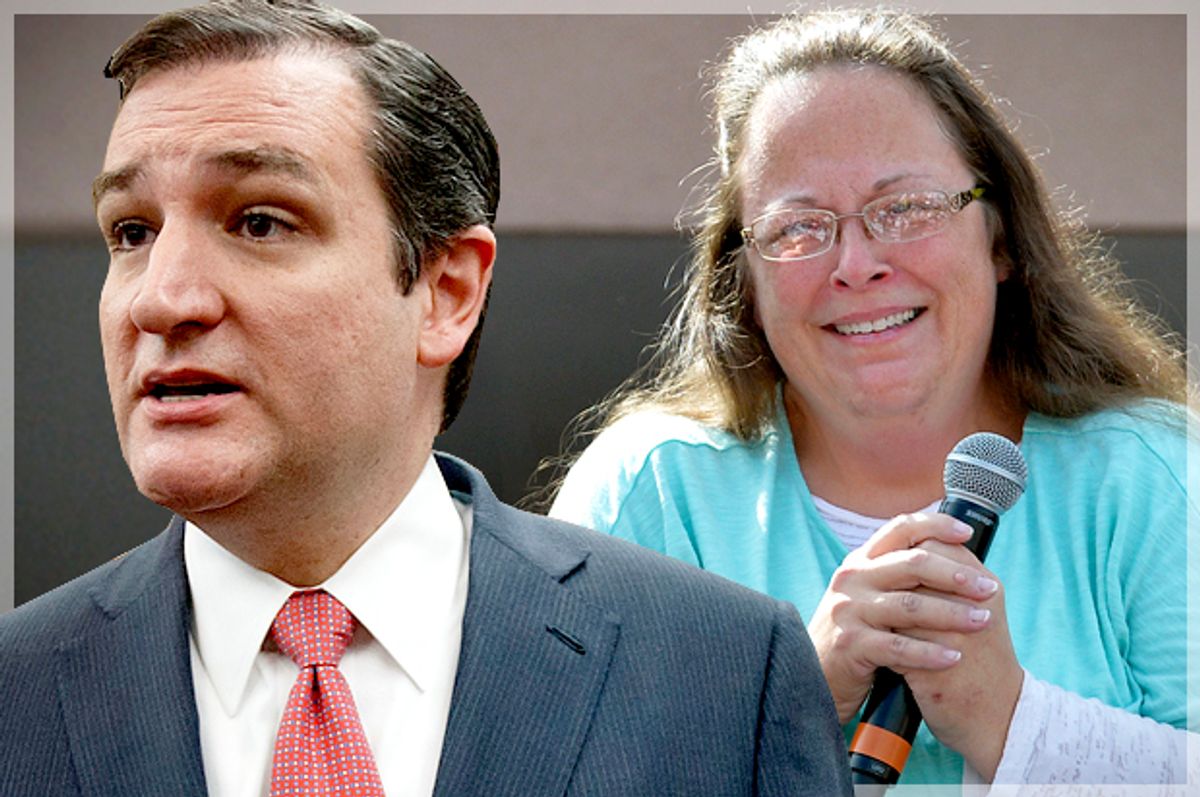 Yesterday, Pope Francis made an historic speech before Congress, the first Pope ever to do so. The themes of his papal visit have been notably social-justice oriented, including a focus on poverty and immigration and the responsibility we all have to work to help the poor and destitute among us. During his remarks, he spoke passionately about just immigration, and of his own family’s history of moving from Italy to Argentina, where he was born.

Pope Francis made further history when he declined to stay and talk with Congress members in favor of spending time at St. Patrick’s Catholic Church. He spoke before roughly 250 staff and volunteers before joining another 300 people for lunch with St. Maria’s Meals, a project of the local branch of Catholic Charities. Many in the audience were homeless.

In his remarks Pope Francis touched briefly on the issue of religious freedom, saying,

“It is important that today, as in the past, the voice of faith continue to be heard, for it is a voice of fraternity and love, which tries to bring out the best in each person and in each society.”

We remain in this country inthe throes of a debate about religious freedom, with Kim Davis, the Kentucky county clerk who defied a federal court order requiring that she issue marriage licenses, asserting her right to discriminate against same-sex couples because of her religious beliefs. We've also seen, more recently, 14-year-old high school student Ahmed Mohammed arrested by his teachers for bringing a homemade clock to school; a Louisville mosque vandalized with hate speech; and the Indian-American president of the University of Southern California student body verbally attacked for her race and religion.

For whom, then, is the American right to religious freedom? For Ahmed, racial and religious profiling resulted in an unjust arrest. Violence and discrimination against Muslims and Sikhs continues, as does the profiling of Arab and South Asian American communities across the country. And, lest we think that this is an issue only faced by non-Christians, let’s remember the horrific and ongoing violence targeting Black churches that has surged in recent months.

In fact, in the wake of the shooting of nine worshippers at Charleston’s historic Emanuel A.M.E. Church, many Christian conservatives spoke at length about religious freedom. Instead of naming the attack as race-based violence, many right-wing commentators spoke of it as evidence that Christians are under attack in the United States. Fox News went so far as to declare it an “attack on faith.” GOP presidential candidate Rick Santorum called the shooting part of a broader assault on “religious liberty” in this country. The recent anniversary of the 1963 bombing of 16th Street Baptist Church in Alabama, which killed four young girls and injured 22 others should remind us of the fact that Black worshippers aren’t attacked for being Christians, they are attacked for being Black. A year after the bombing in 1963, KKK members beat churchgoers leaving the Mount Zion A.M.E. Church in Mississippi. White supremacists have continued targeting black churches and are not motivated by anti-Christian beliefs, instead, they are an age-old response to the deepening political power and civil rights organizing of these churches.

For whom, then, is the American right to religious freedom? If we speak about religious liberty and the freedom to worship without acknowledging the racial biases that permeate this country and result in unspeakable violence against those who are not White Christians, our religious liberty is hollow at best, and false, at worst.

“We know that no religion is immune from forms of individual delusion or ideological extremism. This means that we must be especially attentive to every type of fundamentalism, whether religious or of any other kind. A delicate balance is required to combat violence perpetrated in the name of a religion, an ideology or an economic system, while also safeguarding religious freedom, intellectual freedom and individual freedoms.But there is another temptation which we must especially guard against: the simplistic reductionism which sees only good or evil; or, if you will, the righteous and sinners.”

The violence perpetrated in the name of racism is surely in this category as well.