"Trump is kind of scary. I get the feeling he might actually pull it off": Michael Shannon on "99 Homes," the economic collapse and the eroding American Dream 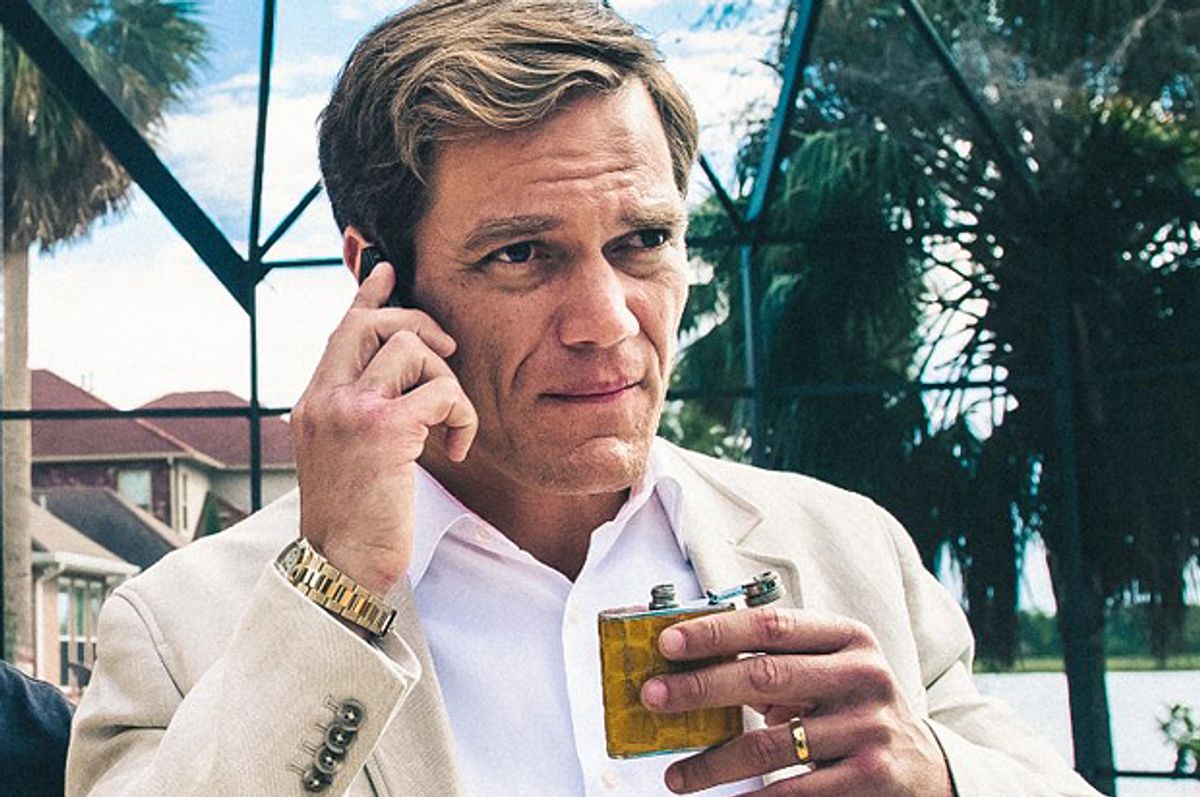 Michael Shannon gives an indelible performance as Rick Carver in Ramin Bahrani’s intense, rewarding drama, “99 Homes.” A shrewd, affectless real estate broker in Orlando, Florida, Rick puffs on e-cigarettes and carries a gun as he goes about his work forcing people out of their foreclosed homes. After he evicts Dennis Nash (Andrew Garfield) and his family, Rick finds an opportunity to hire Dennis as his protégé. The balance of power between these men shifts over the course of this intense, engaging drama.

What makes “99 Homes” electrifying is how Shannon taps into what makes Rick tick; it’s more than just greed and hubris, it’s a mindset that justifies his behavior which escalates to criminal activity. He gets Dennis to do his dirty work with the promise that Dennis can recover his family home.

Shannon has a glint in his eye that makes Rick as seductive as he is slimy. Yet the actor, who is best known for his work in “Taking Shelter,” and his Oscar-nominated turn in “Revolutionary Road,” takes a completely different—and nice guy—role in “Freeheld,” opening October 2. In this issue-driven drama, Shannon is Dane Wells, a New Jersey cop who becomes a straight ally in his lesbian partner Laurel Hester’s (Julianne Moore) battle for pension benefits after she is stricken with cancer.

Shannon spoke with Salon about his characters and his career, as well as his thoughts on realty, the American Dream and the worst jobs he ever had.

Well, I don’t think he’s a piece of human garbage. He’s a person trying to survive like anyone else. He’s a very intelligent person. I admire the fact that he seems to have found a way to take a system that is rotten and corrupt, and turn it to his advantage. Most people don’t do that; they give up, or play the victim. He didn’t. He said I’m going to try and conquer this system and not be bullied by it. I feel like it’s an epidemic in this culture that in order for people to get ahead they have to step on somebody’s head, you know? It’s not the only option, but there are a lot of people who make money by screwing other people over. He’s not the sole shining example of that.

How do you identify with Rick, who is seductive, but not exactly lovable? Do you have sympathy for him?

I don’t know that I have sympathy for him, or that he asks for sympathy. Mostly, I could say I identify with him to the extent that he’s a creative individual. He’s a colorful character and the way he operates and gets by is through his wits. He’s an iconic kind of con-man wheeler-dealer-type person, which is exciting to play. I don’t think he gives a rat’s ass whether you have sympathy for him or not. He’s lonely and unhappy, and something is eating away at him. He thinks Dennis can help him resolve that by passing along the tricks of his trade; maybe he can exonerate himself somehow. If Dennis accepts things, it helps validate his behavior. I think he has a lot of doubts about himself underneath his exterior confidence.

The characters you tend to play are brainy and dangerous. You make viewers root for them even when most folks would run from them in real life. But then you turn around and play a nice guy in “Freeheld.” What are your thoughts about the men you play on screen?

I don’t know that there’s a unifying element with all of the characters I play.

I am always excited by the opportunity to explore how someone else’s mind works. It’s why I started acting in the first place. I like exploring other people’s identities. Every job is different, and comes about for different reasons. With “99 Homes,” I wanted to work with Ramin, because I thought he was a great filmmaker. When I read the script, I saw he took the subject I didn’t know much about and illuminated it in a robust, heartfelt way. I also have a soft side, so something like “Freeheld”—they showed me the doc about Laurel [Hester] and it melted my heart. I met the real Dane Wells and he was a fascinating person. He has a lot of dignity, and the fact that he cared so much about Laurel, I found that very moving. The notion that they had been partners on the force for so long and real close friends, but that Laurel was keeping secrets to keep her job, was a situation I wanted to explore. He had no idea that she was gay.

Rick smokes e-cigarettes and chews on a cigar—the latter being a symbol of power and money. Are you a cigar enthusiast?

No. Ramin gave me the e-cigarette. I got into it while we were shooting, but as soon as we wrapped I turned it back in.

Rick pays Dennis to clean out a house literally full of shit. What is the worst job you ever had?

[Laughs] Telemarketing was pretty bad. So was canvassing door to door for an environmental organization when I was a teenager. I worked at Taco Bell once for a summer. That wasn’t great. I was in the back and made the meat and beans. I was a meat-and-bean man.

Rick has to tell folks they are losing their homes, which is pretty devastating. What’s the worst or most devastating news you received?

Once I was in London and was doing press for “The Iceman,” and while I was there I got a phone call that my daughter Sylvia’s appendix had ruptured and she was going into surgery. So I got on the first plane I could. But while I was on the plane, she was in surgery. I got off the plane and she was out of surgery and OK, but that was the longest flight I’d ever taken.

Rick says “Don’t get emotional over real estate.” What can you say about your experiences buying and selling property? I don’t picture you living in a McMansion, but more monastically?

Our main residence is in Brooklyn, in Red Hook. I rent there. I’m naturally suspicious of banks and mortgages. I always have been. Mortgages seem like a raw deal, but I finally broke my pact to never have a mortgage, so now I have a condo in Chicago. I try not to throw my money around too much, because you never know when you’ll run out. They say Nicolas Cage overextended his finances, and he works constantly because he bought too many houses.

Rick also has a hell of a speech about the American Dream. How do you think that dream is doing these days?

[Sighs] I feel like there’s been a lot of gridlock, and I feel bad for Obama, who didn’t really get to spread his wings and fly. It’s sad to see it all gearing up for the next whoever it might be. Trump is kind of scary. I get the feeling he might actually pull it off. I’m very lucky, I get to work, and it would be hard for me to complain about anything. I have what I need. I know a lot of people are still suffering. This collapse is not a thing of the past for most people. I don’t know how you get ahead. You used to go to college and get a nice job, but nowadays people have a great education and still can’t get a job. It’s scary. And the technology end of it, they seem to be trying to replace people with machines. That’s going to create more unemployment. I try to stay optimistic. I have two kids. I hope the world is still worth a shit when they grow up.