"So, who's going to do party planning for Steve King's nightmare marriage scenarios? I will," Colbert said 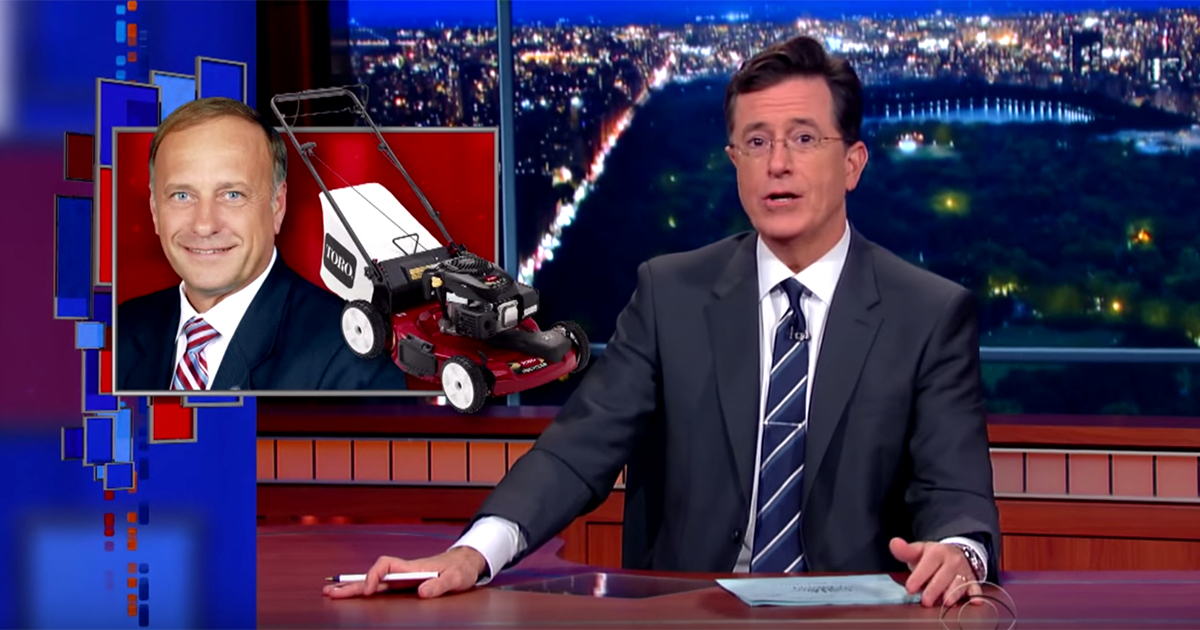 Friday night's Late Show with Stephen Colbert joked that "gay marriage is still a controversy in this country despite the fact that it's not." But so many right wing activists are fighting tooth and nail to maintain some lasting form of homophobia as the Culture War takes its final dying breath.

"I think everyone should love whoever they want," Colbert said. "So, I was miffed when Kentucky County Clerk and forehead magnate Kim Davis refused to issue marriage licenses to same-sex couples. But I also felt bad for her when that judge sent her to jail and even worse when she was sentenced to send an afternoon with Mike Huckabee. It's cruel and unusual," he joked.

Colbert said that Davis isn't alone and brought up Iowa Congressman and cantaloupe calves fan Steve King who recently compared same-sex marriage to marrying a lawn mower. "While introducing Mike Huckabee at a campaign event just this summer, King criticized the Supreme Court's ruling that legalized gay marriage by claiming it means 'You can marry my lawnmower.' It makes sense, I mean, who hasn't looked at a manifold on a two stroke Toro and thought 'damn, I wouldn't mind yankin' that cord!'"

Colbert reminded the audience that King is an actual Congressman, not some crazy old man, though many could see the striking resemblance. "He has sound legal backing for his theories," Colbert said. "It's some guy he met. He says 'I had a ... lawyer tell me... what it brings about is: It only requires one human being in this relationship — that you could marry your lawnmower with this decision. I think he's right.' Yes, the Supreme Court's decision was very clear. Marriage is between one man, and any other noun. I'm not surprised, my college roommate was in a common law marriage with a tube sock."

Colbert went on to eviscerate presidential candidate Ben Carson for saying that other groups will want to marry if same-sex couples have the right to marry. "Not gay groups, some other groups," Colbert joked about the ridiculously vague criticism. "You know, the ones who turn up every year for that crazy Other Groups' Pride parade."

He then hilariously introduced Stephen Colbert's All-Inclusive Wedding Cake Toppers for any marriage imaginable. "You got the classic three women, two men. Where one man is married to two of the women and the other man is married to the other woman but his wife is also married to one of the other two wives... Coming this fall to TLC."

You'll want to see the rest of the clever Colbert Cake Toppers he comes up with in the video below: