"Crazies have taken over the party": Why even Republicans are worried about John Boehner's ouster 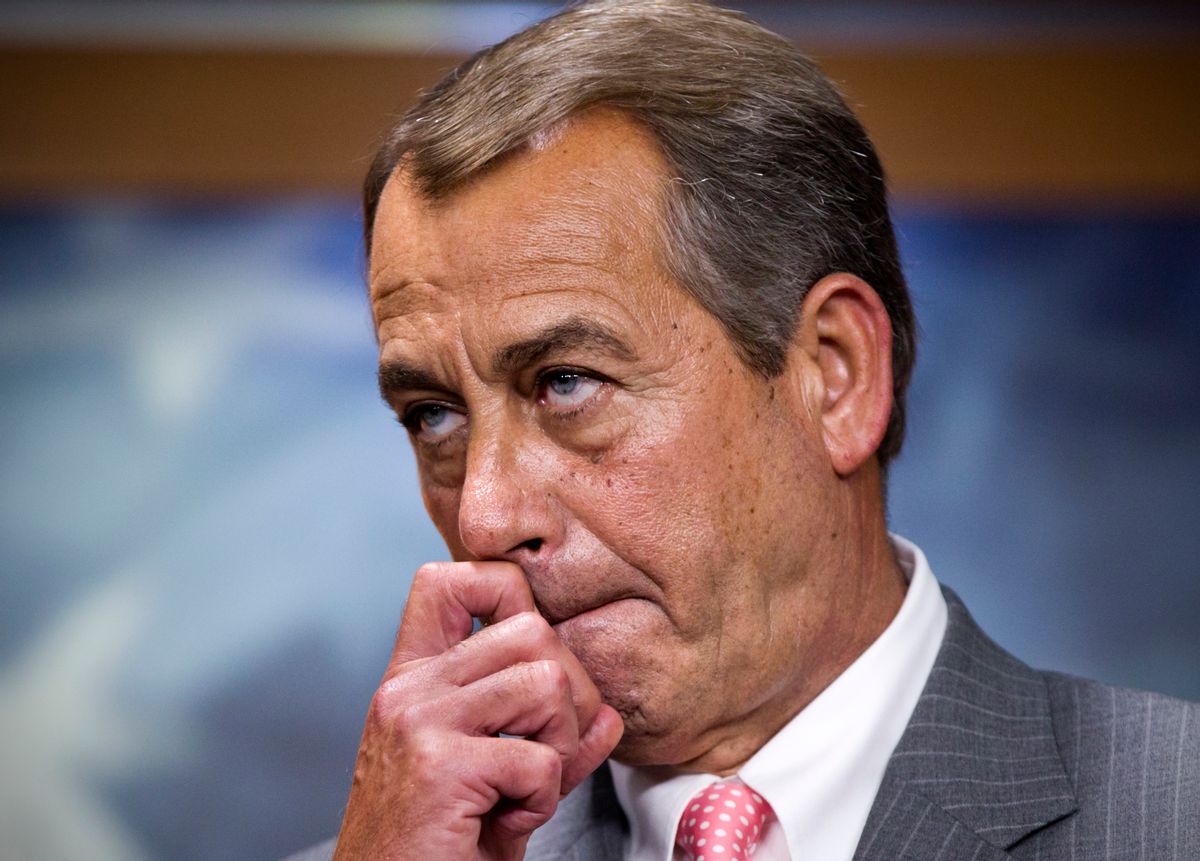 I'd love to hear a good explanation from jubilant liberals about why it's such great news that John Boehner plans to not only step down as speaker of the House, but to entirely resign from Congress. I'll offer one very remote option presently, but on the surface, it seems like horrendously bad news more than anything else. Sure, Boehner's hardly been a ally of the Democratic Party during his tenure. Given who's waiting in the on-deck circle, however, it might be smart to jam the corks back in the champagne bottles and hold off on the onslaught of celebratory Facebook memes.

The irony of Boehner's ouster, following pressure from Tea Party extremists in his caucus, is that he's done their bidding at just about every turn, obstructing the president's agenda while, for example, presiding over 50 successful-yet-pointless votes to repeal Obamacare. He presided over the de-funding of ACORN, based on fraudulent videos, and, most recently, he presided over yet another vote to de-fund Planned Parenthood, coincidentally based on an entire series of provably deceptive videos.

Indeed, the House of Representatives under John Boehner has been one of the most radically obstructionist congresses in generations. There's simply no calculus in any universe to suggest that Boehner hasn't been, at the end of the day, a royal pain in the ass to the Obama administration, going all the way back to the stimulus debate and especially during the crafting of the Affordable Care Act when Boehner famously stood on the floor of the House and declared "Hell no!" to the passage of the law.

To review: Boehner is rabidly anti-choice, ranked with zero percent by NARAL; he's anti-same-sex-marriage, voting "yes" on an anti-LGBT marriage amendment; he's vocally pro-gun, winning an "A" grade by the National Rifle Association; he supports a border fence and he supports English as our official language; he's anti-tax, anti-Iran-deal, anti-science, anti-Obamacare, and he's generally anti-Obama.

The problem, however, is that John Boehner isn't a political zealot, at least in contrast with the new wave of fire-eating Republicans that emerged seven years ago. Ever since the GOP legitimized and absorbed the Tea Party, empowering the buggy-eyed newcomers and dooming itself to the whimsy of political lightweights, Boehner's party has become an incoherent, uncivilized mess -- far worse than it has been at any other time in recent memory. Boehner did his best to pander to the Tea Party, giving its leadership the scalps they demanded and generally allowing them to make the entire caucus look ridiculous. What's clear, though, is that as vigorously anti-choice as Boehner is, he simply refused to go along with the Tea Party on shutting down the government based on deceptively-edited videos (which, by the way, are rapidly being proven as hooey by more than a half-dozen state investigations).

Boehner's behind-the-scenes opposition to a Planned Parenthood-based shutdown evidently makes Boehner a RINO. Or a traitor. Or an Obama loyalist. Worse, Boehner hasn't been loath to meet with Obama at the White House or to knock some golf balls around with the president in the spirit of, at the very least, collegiality, even if legislative cooperation has been consistently sparse. Such cooperative behavior led Ted Cruz to reportedly suggest that Boehner, upon his resignation, will "presumably land in a cushy K Street job after joining with the D's to implement all of President O’s priorities." So, then, even though Boehner has done next-to-nothing to implement any of Obama's priorities, Cruz believes that he's such an Obama loyalist that he'll spend his retirement helping the Obama White House via lobbying activities.

Cruz and the rest of his gaggle of screeching infants have grown like a metastasized tumor within the GOP, choking out politically healthier leaders like Boehner who, in any other time and place, would've been considered paleoconservative. Given how badly the party has skewed into utter incoherence, Boehner suddenly looked too reasonable for the blood-lust of the Tea Party caucus. And that's the only factor that makes him a pariah among the wackaloons who've commandeered his party. He refuses to act like a flailing, self-contradictory mess -- he refuses to behave like Steve King, Louie Gohmert and their Senate counterparts like Cruz.

The most salient quote to come from the aftermath of Boehner's announcement came from Rep Peter King (R-NY) who, like Boehner, would normally be pegged as a GOP extremist but who seems comparatively rational on a spectrum of insanity that now includes Rand Paul and Ron Johnson. King said on Friday:

“I think it signals that crazies have taken over the party,” Mr. King told CNN. “Taken over the party that you can remove a Speaker of the House who’s second in line to be president, a constitutional officer, in the middle of his term with no allegations of impropriety, a person who’s honest and doing his job.

“This has never happened before in our country,” Mr. King said. “He could have stayed on — I would say, a solid three-quarters, 80 percent, 85 percent of the Republican Party supports John Boehner.”

Kevin McCarthy, the man most likely to take over the speakership, isn't the dyed-in-the-wool Tea Partier the far right craves. But its not a stretch to imagine that down-ticket votes to fill out the leadership will provide a new infusion of extremist fervor. (And you can bet McCarthy will be on his best behavior.) This means more government shutdowns, more brinksmanship with the debt ceiling, and, generally speaking, a Republican Congress that's even less tethered to political reality. There's a adult quality to Boehner's politics that's completely absent among the raging fanatics who forced him out. Not to belabor the point, but for all his faults, Boehner was the last thin barrier between the old GOP and the new -- the last bulwark against, as King said, the crazies.

None of this, no matter how much fun it is to tease him about his orange skin or his hair-trigger sobbing, is good news.