Carly Fiorina is more dangerous than Donald Trump: Her brazen demagoguery puts his to shame 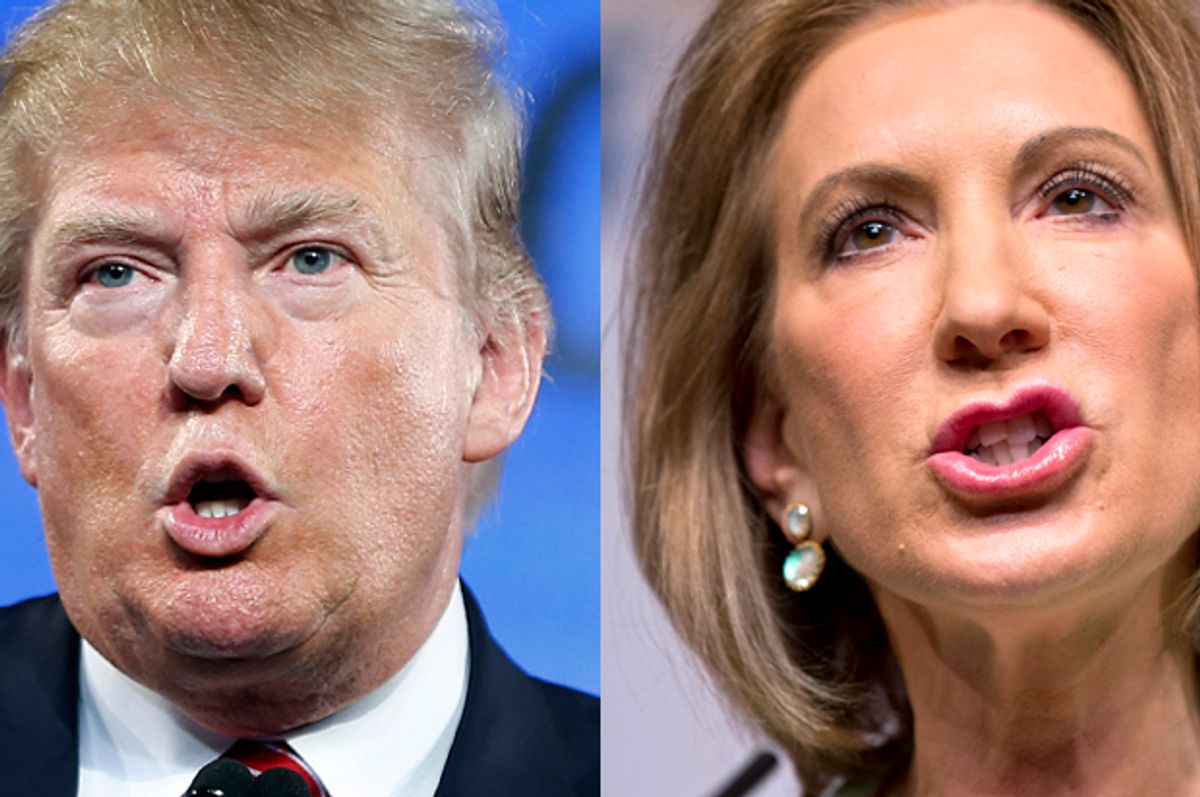 On Sunday, Carly Fiorina went on "Meet the Press" and gave more evidence that she has become the most dangerous demagogue in the Republican primary field.

This is partly a function of her recent climb in the polls, while Donald Trump has begun to slide. It is also partly a function of her strict adherence to right-wing ideology on issues such as abortion and national security, and partly a function of the affect she’s developing on the campaign trail. Of the top three current candidates – Fiorina, Trump and Ben Carson – it is the former HP executive who has emerged with the steely resolve and chest-thumping, unapologetic jingoism so beloved by conservatives. Combine this with specific policy prescriptions and you get a formidable candidate who, unlike someone like Jeb! Bush, seems to grow, not wilt, in the spotlight.

Full disclosure: Two weeks ago, I wrote an entire column arguing the exact opposite of what I’m about to say. But Fiorina’s debate performance and her ongoing defense of her comments on Planned Parenthood, combined with polls indicating the air really has started leaking out of the Trump balloon, have me rethinking my position.

Her MTP interview was a textbook example of Fiorina’s effectiveness in appealing to the right wing, particularly when she’s in the cross hairs of a mainstream media outlet. (That she was questioned by Chuck Todd, an interviewer so hapless he might as well have been my 2-year-old nephew asking “But why?” after every Fiorina answer, certainly helped.) Asked why she’s sticking to the well-documented fictions she keeps telling about the infamous Planned Parenthood videos, Fiorina smiled like a shark, shook her head, condescended to and talked over Todd, and reiterated with all the assurance of a champion bullshit artist that yes, there is no question that “Planned Parenthood is aborting fetuses alive to harvest their brains and other body parts. That is a fact.”

It is useless to point out how many times this garbage has been debunked. Fiorina not only either believes it or can convincingly pretend to, but she also gives the antiabortion movement on the right some additional credibility. While one expects, say, former Baptist minister Mike Huckabee’s strident antiabortion rhetoric, Fiorina does not wear her religion on her sleeve. Nor does she, as nearly every other candidate does, come from a legislative background where she has wrestled with the abortion issue. She can plausibly claim to be a secular true believer, making antiabortion positions not just the province of evangelicals and other religious conservatives.

Fiorina also has an advantage over the openly religious Ben Carson in this area, one created by the latter’s soft-spoken demeanor. The Republican base is in a fighting mood. The more spark she shows, the more she can draw conservatives away from the retired neurosurgeon who is currently a hair behind Donald Trump in the polls.

But where Fiorina’s demagoguery becomes even more dangerous is in its specificity about policy. Compare her talk on foreign policy to those of Trump and Carson. When asked during the debate how she would interact with Vladimir Putin, Fiorina told CNN’s audience,

What I would do, immediately, is begin rebuilding the Sixth Fleet, I would begin rebuilding the missile defense program in Poland, I would conduct regular, aggressive military exercises in the Baltic states. I'd probably send a few thousand more troops into Germany. Vladimir Putin would get the message.

Imagine you are a Russian hard-liner sitting in Moscow watching this debate and hearing the GOP’s third-leading candidate promising a foreign policy aimed at your country that is so muscular, Ronald Reagan’s corpse just got an erection. You’re not thinking that Fiorina sounds more unhinged than General Buck Turgidson or the fact that Barack Obama is also conducting aggressive military exercises in the Baltics and the Sixth Fleet is as big and strong as ever. You’re thinking Comrade Putin will stand strong against this foolishness when Carly Fiorina is in the Oval Office.

And if you are a conservative voter in America, you’re thinking, Carly won’t be a chump like that wimp Obama, who has let Putin walk all over him. That swelling in your chest is a jingoistic pride that you haven’t felt during the long, dark years that the Kenyan Usurper has been destroying America from within.

Compare Fiorina to the boastfulness of Donald Trump, who talks in generalities: I’ll make us great again, I get along with everyone so I’ll get along with the Russians and Chinese, I’m a successful businessman, I’ll make fantastic deals and everyone will be very happy. Trump also promised he would actually talk to Putin instead of ordering the Sixth Fleet into the Turkish Straits practically the moment he takes his hand off the Bible at his Inauguration. Despite all his bluster, Trump at the end of the day wants to be the friendly executive strolling across the construction site and shaking hands with all the hardhat-sporting workers. Fiorina wants to be the one yelling at them to quit staring at her and get back to work.

After all, talking and making friends is also what that community organizer Barack Obama does.