"The Martian" and the big Mars discovery: Here's why we have to go, no matter what it costs

Was this week's big NASA announcement a movie tie-in or a leftist plot? Either way, Mars is calling 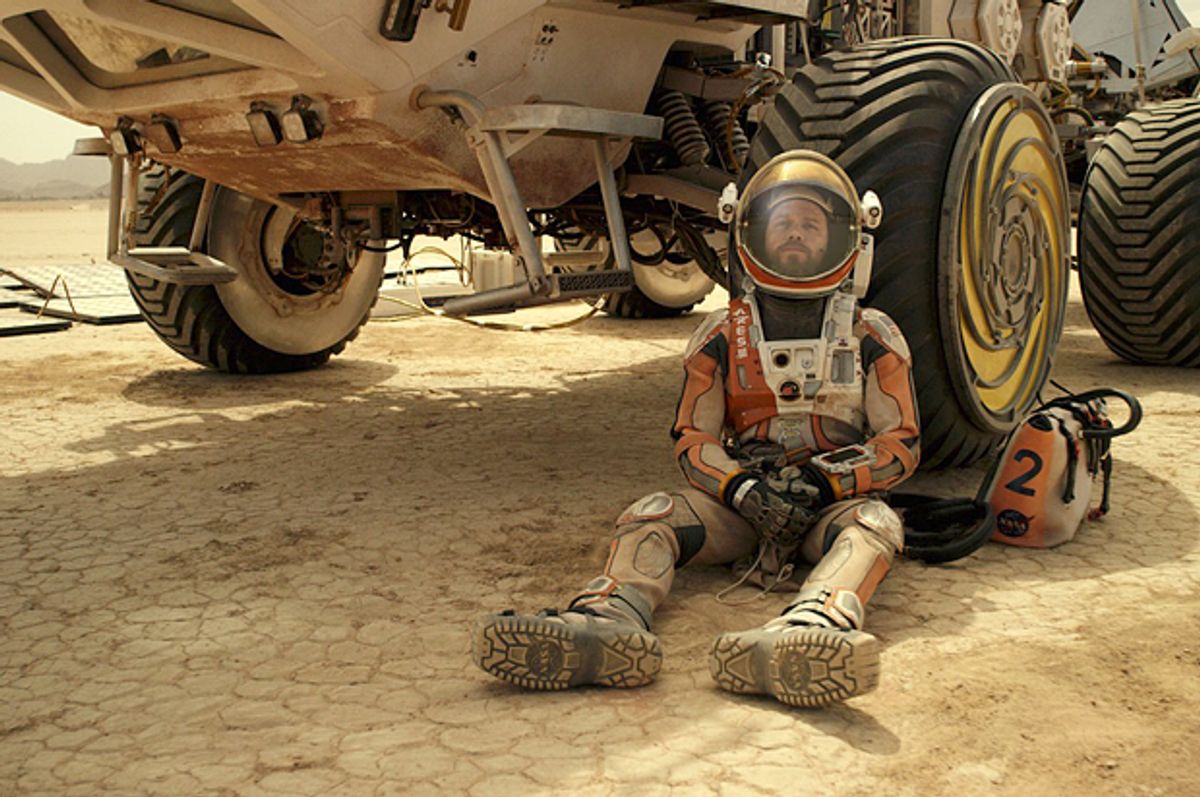 I believe it was the film historian Mark Harris (also the undisputed heavyweight champion of Oscar bloggers) who first injected a note of cynicism into the furor surrounding one of the biggest scientific discoveries of the 21st century: Flowing water on the surface of Mars. Was it entirely a coincidence, Harris tweeted, that the very same week was also bringing us Ridley Scott and Matt Damon’s science-nerd extravaganza “The Martian,” the most pro-NASA movie in many years? Which is, by the way, a tremendously exciting popcorn spectacle, and also a portrait of extraplanetary survival convincing enough that it had my tech-obsessed 11-year-old companion on his feet cheering on several occasions.

I'm pretty sure Harris was kidding, and did not think that NASA’s big announcement was a movie tie-in. But I also don’t think Matt Damon actually meant to say that he thought gay actors should stay in the closet, which was how a clumsy statement he made in a Guardian interview has been interpreted. But before we move on from the briefly titillating question of whether we will find unexpected life on another planet within our lifetimes to the far more important issue of Celebrities Who Say Dumb Things (which often feels like the central theme of the Internet, after amusing cat videos) – wait, hang on, let’s not move on, dammit.

Let’s go to Mars. If this week’s unlikely coincidence of life and art is sending us a message from God or our alien overlords or the marketing geniuses of Hollywood, that’s what it is. I think we have to go to Mars. If your first reaction is to say we can’t afford it, or there’s too much screwed-up stuff to deal with here on Earth – well, sure. But that’s not the way the human species has ever approached things, and I believe that on some fundamental level it’s neither the right answer nor a true answer.

Launching a new manned spaceflight program, alongside the current unmanned research missions that have immensely expanded our understanding of our planetary neighbors and the universe, does not mean giving up on addressing climate change or developing alternative energy technology or reducing poverty and inequality. It might, over the long haul, make those things easier to deal with, rather than more difficult. Science and technological possibility and human ambition are not zero-sum equations; one of the dorky but inarguable points made over and over again in Drew Goddard’s screenplay for “The Martian” (which is adapted from Andy Weir’s bestselling novel), is that ambition breeds innovation and innovation spurs on ambition.

Yes, it will cost fabulous, almost unimaginable sums to develop and execute a human Mars mission like the one that goes awry in “The Martian.” If anyone were to propose a concrete number -- $100 billion has repeatedly been floated, but given the history of the space program that is almost certainly a lowball estimate – the inner Grover Norquist within all of us would rise up and vow to drown this pointless scheme in the cosmic bathtub. But that’s small-minded thinking from a nation that has grown distressingly hunched and small. In 1962, John F. Kennedy made that famous speech at Rice University announcing that the United States would put a man on the Moon before the end of that decade -- and it happened. In 2004, George W. Bush announced a plan to send humans back to the Moon by 2020 and establish a long-term base there to be used as a launchpad for missions to Mars and elsewhere. How's that been going?

Among the innumerable signs of America’s imperial decline, few are clearer than our abandonment of a manned space program and the governmental defunding of numerous scientific disciplines. We have collectively decided – or we have permitted it to be decided in our names, which comes to the same thing – that science is not trustworthy and not worth it, that we’d rather cut taxes for millionaires and build up the national debt by pouring our grandchildren’s dollars into the black hole of permanent war and an omniscient security state.

Sure, I can hear those murmurs of prudence and caution coming from the liberal quadrant too, which has grown hunched and small in its own distinctive way. As I was about to wrap up this article, I heard about Rush Limbaugh’s pronouncement that NASA was lying about the discovery of water on Mars in order to push a “leftist agenda,” and I could just rest my case right there. To a certain disturbingly widespread mind-set, scientific discovery and the advancement of human knowledge are suspicious in themselves, and likely to produce culturally unhealthy outcomes. Look at the mess Galileo and Darwin got us into! Of course the right knows or pretends that evolution is dubious, and that schoolchildren should “study the controversy.” How convinced are they, really, that this whole business about the Earth orbiting the sun – when common sense tells you otherwise! -- is not the cover story for a “leftist agenda”?

Anyway, liberals – please don’t start in about how we need that money to feed the hungry, provide universal healthcare, make higher education affordable and clean up the environment. I’m in favor of those things too, but we’re not doing them anyway, and we won’t until we have a more realistic taxation structure in this country and can break free of the ideological hypnosis of austerity and privatization and “market-based solutions.” (Which was inflicted upon us by Bill Clinton’s administration and the Democratic leadership caste of the ‘90s, at least as much as by Reagan and the Republicans.)

If we don’t have single-payer health insurance and a way to send every qualified kid to college and a realistic plan to land a woman on Mars by 2027, it’s not because we lack the resources. It’s because our minds have been clouded by lies and manufactured delusions, and because our priorities are hopelessly screwed up. Let’s assume that $100 billion estimate for a Mars mission is low, way low. Let’s assume it’s too low by a factor of 10, and that sending human beings to the Red Planet and getting them back in one piece would cost more like $1 trillion. Unimaginable, right? Yeah, it’s a lot – so much that it’s almost one-fourth the estimated total cost of the Iraq and Afghanistan wars. Which were super-necessary and did so much for humanity that we can’t possibly imagine having done without them.

As for “The Martian,” if it’s a feature-length advertisement for the possibilities of a new human spaceflight program, it’s a damn fine one. If the sheer number of low-tech solutions stranded astronaut Mark Watney (Damon) must improvise in order to stay alive indefinitely on Mars -- after being left behind alone, badly injured and with little food or water -- beggars the imagination, each individual stroke of genius is plausible enough. Back on Earth, we have perhaps my favorite dork-moment in the movie (there are dozens of those, if not scores), when a young telemetry genius at NASA unveils his outrageous, breaking-all-the-rules plan to rescue Watney after more conventional methods have failed. His codename for the scheme is Project Elrond, and everybody in the room begins exclaiming about how that’s the perfect monicker for a secret meeting where a radical shift in strategy is decided upon, while the NASA P.R. official played by Kristen Wiig looks on in bewilderment, announcing, “I hate you all so much.”

This is Ridley Scott’s most entertaining and energetic film in a very long time, and made me want to forget “Prometheus” all over again (having pretty well forgotten it once already). You can argue that the plot of “The Martian” doesn’t offer many surprises, but this is a movie of innumerable delightful moments and small discoveries, and even more of infectious enthusiasm. Goddard’s screenplay captures and distills the tirelessly geeky behind-the-scenes camaraderie of this massive technical exercise, and also the dedication and momentum that keeps pushing Damon’s character forward even when he is 99 percent sure he will die alone, millions of miles from home.

In casting the large and delightful multiracial and mixed-gender ensemble of “The Martian,” which includes Jessica Chastain as the Mars mission commander, Michael Peña as a fellow astronaut, Chiwetel Ejiofor as the head of Mission Control in Houston and Donald Glover as the telemetry wunderkind who may save the day, Scott has done more than score identity-politics points. (Although I don’t doubt that such a motivation was in the mix.) He’s announcing that the infectious nerdy enthusiasm this film celebrates and embraces – and indeed proposes as the true solution to what ails us, embodied here by the reverse-Christ figure of one solitary dude trying to grow potatoes on a (presumably) lifeless planet – has spread far and wide, and cannot be stopped.

These days it isn’t just bespectacled white boys (and Asian boys) who love physics and engineering and microbiology, who worship technology on its own terms and also for the human possibilities it opens, and who will take massive dorky enjoyment in being part of something called Project Elrond. Boys and girls and men and women of all colors and on all continents will thrill to this movie this week, as they have thrilled to the news that the red orb out there in space, which has teased us so long at the outer edges of human imagination and human possibility, may not be barren after all. Can we afford to go to Mars? We can’t afford not to.